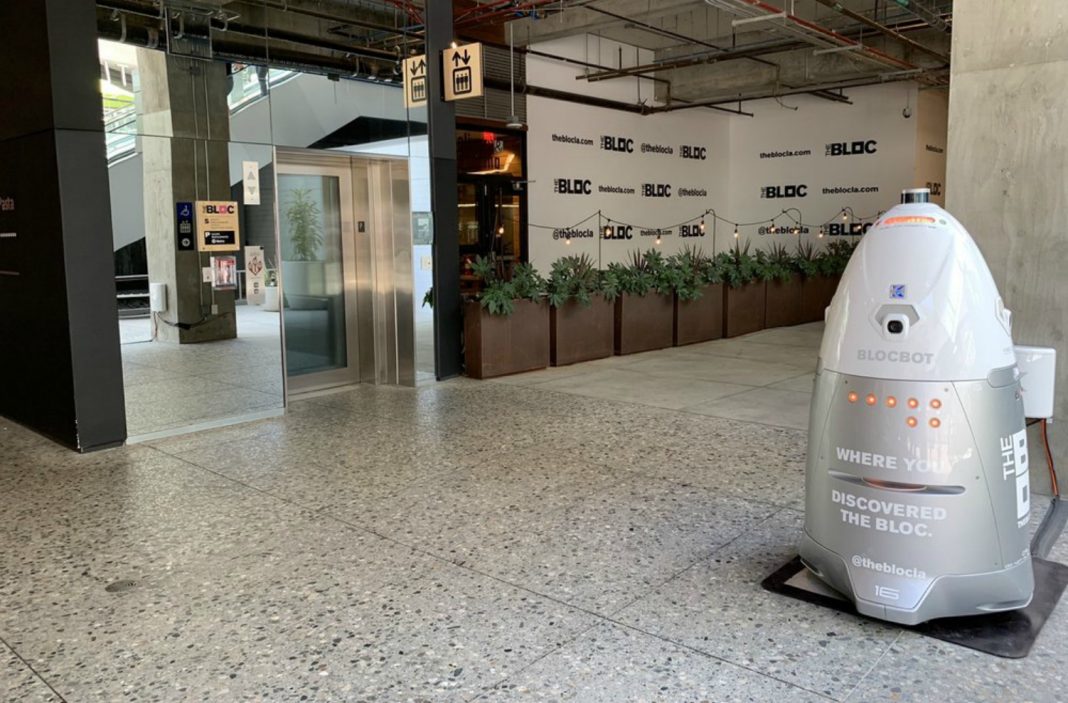 Robots are everywhere in Los Angeles—hospitals, bars, malls (did no one see Chopping Mall?)—and the wave of new tech is sparking conversations about automation and job loss. But not all robots are created equal. While some are advanced and potentially life saving, others seem to be more for show than utility. Here’s a roundup of the friendly automatons you might encounter around the city.

With a long white arm with a spatula where its hand would be, Flippy cooks nearly 300 hamburger patties a day and places them gently on buns for his human coworkers to prepare and serve to guests. Shortly after he started cooking, though, Flippy was placed on sabbatical after an influx of curious customers and a lack of trained humans overwhelmed the robot. Now he’s back—with limited hours—at the Pasadena branch of CaliBurger between 12:30 and 1:30 p.m.

Gabriel, a large robot with a blue tuxedo and wide eyes printed on his front, can be found leading guests from room to room in the Sheraton Los Angeles San Gabriel Hotel. On an iPad fastened above its face, he presents a list of places in the hotel and then—at a snail’s pace—leads guests to their destinations. If there aren’t guests to be helped, Gabriel (and six of his brothers and sisters) can help staff with chores like picking up trash in the hallways and delivering clean sheets to hotel rooms. The robot isn’t always graceful, though. At the end of a video highlighting the robot’s efficacy, the host exclaims “look at that precision!” as Gabriel opens a door—and then proceeds to run straight into it.

Unlike others on this list, these bots aren’t meant to draw a crowd. Cedars-Sinai Hospital’s resident robots specialize in behind-the-scenes work, transporting things like supplies, medical waste, and sheets throughout the hospital. They’re about the size of refrigerators and can cart around 600 pounds of supplies. Most patients will never see them, though—the robots move through secret hallways in between the floors of the hospital and special elevators.

The Bloc, a shopping mall in downtown Los Angeles, has enlisted an R2-D2-looking robot to patrol the grounds. Bloc Bot, who was named by Instagram users, rolls around the mall answering questions and collecting data from the high-resolution cameras on its chest. While the robot has had a relatively smooth transition into mall life, other models in cities across the country have had a rougher time. In Times Square, a similar model drove itself into a fountain leaving the robot in “critical condition.” Another in a mall in Palo Alto ran over a toddler.

Gearmo is a friendly cyclops at Arts District arcade Two Bit Circus with an animated rainbow eyeball and a snazzy bow tie that spins in circles when he’s excited. Customers can select from a list of cocktails, including the Flying Trapeze Artist (a mix of Jack Daniels and citrus) and the Bobbing for Apples (which includes Ciroc Vodka, a whole cored apple, and a lollipop). Gearmo picks alcohol from a ferris wheel of booze, stirs in some mixer, and pours the drink into the customer’s cup, all while beeping and blowing kisses with his rigid metal arm.