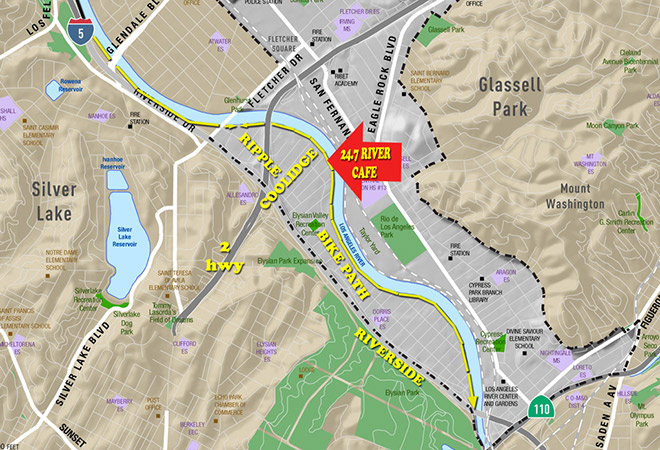 Come Oscar Sunday, don’t crack the André too early: River Wild just booked your morning. Bike or walk to the pop-up festival, a celebration of the Los Angeles River and its relevance as a public space, located at mile marker 24.7 on the River Path just outside RAC Design Build. (Angelenos who need to drive can punch 3048 N. Coolidge Avenue into their GPS). River Wild encourages visitors to pedal along the famous waterway and even offers rentals to the wheel-less.

The pop-up has been happening sporadically since August. Damian Robledo, co-founder of River Wild, says he’d been biking the river for decades, and was always bewildered by the lack of basic amenities along the 51-mile path. From Canoga Park to Long Beach, Robledo realized, “There was nowhere to stop and get a stick of gum, a cup of coffee, or a glass of lemonade. We wanted there to be somewhere people could stop and meet their friends.”

This weekend, visitors can expect to find Cafécito Organico brews served out of a tiny 1920s dwelling – “an Elysian Valley hut,” says Robledo – Let’s Be Frank wieners, juice, and bicycle-churned ice cream from Peddler’s Creamery. There’ll be music, too, as well as booths championing great river-related causes, such as Landbridge at Figueroa (which proposes turning historic Figueroa Bridge – slated for demolition – into a public park akin to New York’s High Line). At 11:30 AM, folks from Enrich L.A., the bridge project’s non-profit leader, will facilitate a ride to the river-spanning bridge, where they’ll create a pop-up park. Think lawn chairs, astro-turf, beach balls, and a chance to envision a true river hub.

Robledo, an architect by day, says he’s most excited for River Wild’s “place-making” effect. “It’s a term you hear a lot in my field,” he says, “but it simply means a form of urban planning that anyone can be part of. Look all over the world: biking and coffee tend to bring people together. That’s what River Wild does. Plus, it’s fun.”

And don’t worry – when the time comes to head to an Oscar watching party, the L.A. Department of Transportation’s new way-finding signs along the river path will help you navigate. Now there’s a river that loves you back.

River Wild takes place on Sunday, March 2nd, from 8 AM to 2 PM, at mile marker 24.7 on the Los Angeles River Bike Path.