Home Books Rising Above Rhinestones: How Ed Hardy Got His Name Back From Hollywood 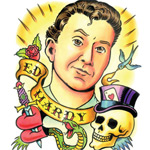 Ed Hardy’s new memoir, Wear Your Dreams: My Life in Tattoos (Macmillan Publishers, 304 pages, $27), highlights a long-forgotten biographical detail: The 68-year-old Corona del Mar native is an artist who was celebrated for intricate tattoos he crafted at his San Francisco shop. His name has since been reduced to the rhinestone-emblazoned emblem of L.A. excess.

For that you can thank marketing shark Christian Audigier, an L.A.-based French entrepreneur who first brought the world Von Dutch trucker hats, then licensed Hardy’s name in 2004. He soon opened a flagship clothing store on Melrose, eventually stamping everything from guitar picks to tanning lotion with Ed Hardy designs. Hardy wasn’t a fan of Audigier, once describing him as the “ground zero of everything wrong with contemporary culture,” but the lucrative deal allowed him time off to paint, even as his street cred dwindled—along with, allegedly, his cut of the profits. In 2009, Hardy filed a $100 million lawsuit accusing Audigier of underreporting sales and manipulating his imagery in violation of the terms of their contract. The parties reached a settlement, and Hardy has since partnered with another company to reboot his brand overseas, particularly in Asia. Sure, that may help Hardy, but we’d like to apologize to China for all those bedazzled men’s shirts.