Home Crime Ripped from the Headlines: Six Ways to Spell the Signature Sound of... 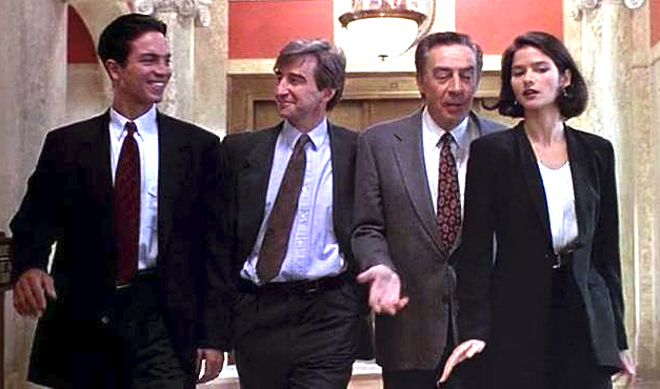 Law & Order’s emblematic riff—a two-beat chime that follows the discovery of a crime that opens each episode of Dick Wolf’s police procedural franchise—is one of the most recognizable sounds on TV. But what is it called and how is it spelled?

“Thunk thunk”
The Chicago Tribune referred to it as “thunk thunk” in a story about the 18th-season premiere of the show.

“Ching ching”
NBC uses “ching ching” to describe the ringtone of the sound, available for download on the network’s Web site.

“Doink Doink”
Dann Florek, who plays Donald Cragen on Law & Order: Special Victims Unit, once called it the “doink doink” in an interview with Zap2It.

“The Clang”
Composer Mike Post, who created the sound, has christened it “the Clang.” The Grammy and Emmy award winner also scored the show’s theme. The effect was produced by combining six or seven sounds, including that of 500 men stamping the flour. It is meant to be reminiscent of a judge’s gavel, or a jail cell door slamming shut.

“The Dick Wolf Cash Register Sound”
Law & Order: Special Victims Unit actor Richard Belzer has described the sound as the “Dick Wolf cash register sound,” referring to the show’s successful producer, on NPR. (With buckets of dough made on the franchise to date, it might just be ka-ching!)

So who’s right? We’re picking Post out of the lineup. Case closed.