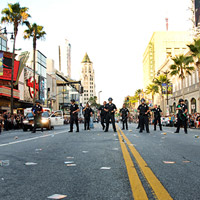 Police in riot gear shut down the streets surrounding Grauman’s Chinese Theatre Wednesday after hundreds of people who were not invited to the Hollywood premiere of Electric Daisy Carnival Experience, a documentary film about the Electric Daily Carnival festival, showed up at the private event. A tweet sent from a popular electronica DJ, DJ Kaskade, to his 90,000 followers with information about the events may be to blame for the unexpected crowd. Although there were no reports of injuries or property damage, at least two people were arrested.

The Electric Daisy Carnival was held in Southern California from 1997 to 2010. It moved to Las Vegas in 2011 following criticism from local authorities with health and security concerns. A 15-year-old attendee died of an ecstasy overdose at the 2010 event.