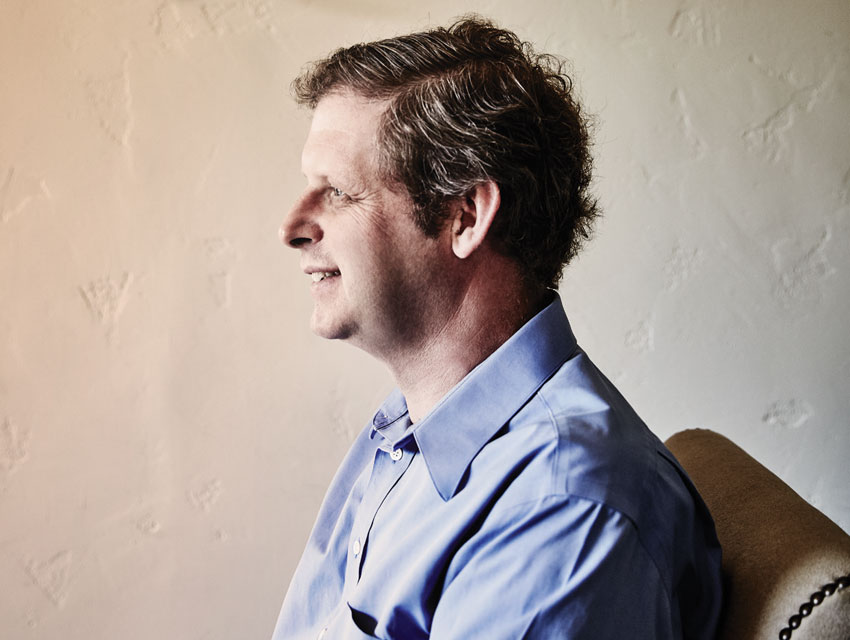 Eugene Volokh leads me into the kitchen of his graceful two-story Mediterranean-style house in Pacific Palisades and offers me a cup of coffee. When he realizes that the sugar bowl is empty, he reaches into a cupboard and pulls out a box of sugar. I tell him not to bother filling the bowl, but he ignores me. “It’s a fixed cost that will be amortized over family visits in the future,” he says, an impish grin appearing on his face.

Even though he’s 47, Volokh still exudes a smartest-kid-in-the-classroom vibe. He first came to local prominence when the Los Angeles Times profiled him in 1980 in a feature story that ran under the headline “ ‘Gifted’ 12-Year-Old Math Genius Is UCLA’s Youngest Undergrad.” Now, after two decades as a law professor at his alma mater, he’s emerged as one of the nation’s leading constitutional scholars. He’s also become a leading conservative and libertarian legal theorist, establishing himself as one of the few Angelenos to play a prominent role in hard-right political circles. Volokh writes prolifically—law review articles, op-ed essays, legal textbooks—but it’s his Web presence that has earned him the most recognition. Founded in 2002, The Volokh Conspiracy is among the oldest and most widely read legal blogs in the country. The site’s mainstream reach expanded dramatically after the left-leaning Washington Post started carrying it on its Web site last year, and its impact extends far beyond its 22,500 unique visitors per weekday. Liberal Supreme Court Justice Elena Kagan is said to be a regular reader.

“The Volokh Conspiracy is the most influential law blog with a point of view,” says Adam Liptak, the Supreme Court correspondent for The New York Times. “There are other law blogs that are aggregators or play it straight journalistically, but other than that, there’s almost no competition. If the blog focuses on, say, a pending application for Supreme Court review of a case, it’s likely to elevate interest in that case.”

It was on The Volokh Conspiracy, for example, that the first strong constitutional challenge to Obamacare was articulated and popularized. The argument floated on the blog by “coconspirator” Randy Barnett, a Georgetown University law professor, eventually made it to the Supreme Court. The role played by the blog inspired former solicitor general Paul Clement, who argued the case before the court, to write, “The Constitution had its Federalist Papers, and the challenge to the Affordable Care Act had The Volokh Conspiracy.”

Although he describes himself as “a libertarianish conservative or a conservativish libertarian,” Volokh rarely toes any party lines. He was one of the legal architects of Proposition 209, which changed the state constitution to eradicate affirmative action in 1996, yet he’s also a robust free-speech advocate who supports the right to burn the American flag. He’s an atheist who agreed with the Supreme Court’s decision to allow Hobby Lobby to refuse, on religious grounds, to pay for its employees’ contraceptives. He supports same-sex marriage. He’s skeptical of gun control.

There are few subjects about which the site’s founder doesn’t have an opinion, and there are even fewer opinions that he isn’t happy to share, usually in complete sentences and well-ordered paragraphs. For instance, I ask him half-jokingly what he thinks about the Knee Defender, the controversial device some airline passengers use to prevent others from reclining their seats. The question is apropros of nothing, but he replies with a long, rigorously reasoned dialectic.

“Here you have a situation that clearly violates the rules of the way we deal with shared space,” he says between bites of a microwaved lunch from Trader Joe’s. “I read a column that said people were turning this into a legal issue when it’s just an issue of good manners. But good manners are defined against a backdrop of a particular location of property rights or quasiproperty rights or contract rights. A lot of difficult questions arise, particularly for people who have a presumption of liberty, about how you deal with shared space. It’s easy enough to say that you should be free to do whatever you want on your own property, but it’s a tougher question when we have joint property. And some things that people do make that shared space less valuable for others. What part of the space are we entitled to call our own?”

“Eugene Volokh is that rare scholar whose work extends beyond the academy,” says Damon Root, a senior editor at Reason, a prominent libertarian magazine published in Los Angeles. “His blog posts are read by every journalist who covers legal affairs, and the U.S. Supreme Court has cited his work on both the First and Second amendments. I would wager that the majority of young lawyers and legal activists now working on behalf of libertarian and conservative causes have been influenced by Volokh’s work.”

Volokh was born in Kiev to nonobservant Jews who were desperate to escape from Communist Russia. By the time he was four, he was quizzing bewildered preschoolers about geography, and he tackled calculus when he was seven. The family immigrated to Southern California shortly thereafter. His father, Vladimir, eventually started a software company. His mother, Anne, ended up as the publisher of Movieline magazine.

Computers fascinated the young Volokh. He wrote his first professional-grade program when he was ten and earned his first paying gig as a coder two years later, when his IQ was measured at 206. After graduating early from UCLA at 15, Volokh worked full-time as a software engineer. He was good at the job, and it paid handsomely, but he craved a more meaningful vocation. “I wanted to lead a semipublic life,” he says. “I wanted to comment on issues of the day. I wanted to write op-eds. I wanted to appear on talk shows. I wanted to file amicus briefs. I think it’s just natural, especially in free and democratic societies, to want to participate in the civic life of the nation.”

As a refugee from a communist dictatorship, Volokh grew up with a natural affinity for capitalism, democratic institutions, and Reaganesque foreign policy. But even as his conservative views hardened as an adult, he developed a powerful interest in free speech and the First Amendment, and he decided that a law degree would be his ticket to a career in shaping public policy. After graduating from UCLA with top honors, he landed a prestigious clerkship in Washington, D.C., with U.S. Supreme Court Justice Sandra Day O’Connor. Although Volokh had originally planned to be a prosecutor, he realized that he would be more content in the academic world. So when UCLA offered him a slot in 1994, he eagerly accepted. He married another attorney, and they have two sons, 11 and 9 years old, with whom he works on the kind of mathematical puzzles his father once solved with him. He loves hosting get-togethers with guests cherry-picked from various professions to produce stimulating conversation.

“His intellectual wingspan is remarkable,” says Stephen Yeazell, who had been one of his law school professors and is now his colleague at UCLA. “Even a casual lunch with Eugene can be pretty intense. It’s not ‘How ’bout them Dodgers?’ He’s always got something he wants to talk about. Plus he’s got more energy than nine people put together. His output per day is so substantial that I don’t know how long he sleeps at night.”

As a polymath who writes quickly and well on a range of subjects—from obscure ethnic cuisine to entries for the American Heritage Dictionary Usage Panel—Volokh was ideally positioned when blogging took off at the turn of the century. In 2001, he became one of the first guest bloggers on Instapundit, a pioneering political blog. The next year he created a blog with his younger brother, Sasha, a professor at Emory University School of Law, and two other law school professors. They named it The Volokh Conspiracy as an ironic play on “vast right-wing conspiracy” and that old standby, “Jewish conspiracy.”

When he isn’t teaching or doing pro bono work, Volokh tries to get in at least one post a day. On a recent Wednesday, without any classes or court appearances on his schedule, he managed five—one each on polygamy, copyright law, gun control, traffic statutes, and foreign law as it applied in Alabama. “Here’s my perfect blog post,” he says. “There’s a story in the news. People are interested. I know something other people don’t about this general area of law, and I can say it in a few paragraphs that I can just whip out. When a reader says, ‘Huh, I hadn’t ever thought about that. I hadn’t seen this precedent. I hadn’t been aware of that legal doctrine. I hadn’t realized how this analogy would fit,’ that makes me feel that I’ve done what I became an academic to do, which is to spread ideas.”

About two dozen bloggers, mostly law school professors, write regularly for his site. Posts range from legal arcana (the Zivotofsky disclaimer and Federal Rule of Evidence 702) to popular culture (zombies and Game of Thrones). The politics skew to the right, and there’s a deep vein of hard-core libertarianism, but Volokh insists that the blog is a “big tent.” In fact, he rejects the constitutional objections to Obamacare that were raised by coconspirator Randy Barnett. Volokh even faced off against his colleague in a debate about it that was moderated by Utah senator Orrin Hatch at the Heritage Foundation, a conservative think tank. “When I first met Eugene, I suspected he was a very ideological person,” says liberal UCLA law professor Adam Winkler, who’s often sparred with Volokh over gun control issues. “But as I got to know him, I found him to be more pragmatic, less dogmatic, certainly less partisan and less likely to favor something just because others of his political leanings supported it. Eugene believes in debate and discussion. He never gets personal, never gets angry. He’s not the kind of guy who’s going to go on Fox News and yell and scream. He’s just smarter than the rest of us.”

Eloquent, amiable, and polished, Volokh has come a long way from the geeky prodigy who remembers his younger self as being “socially inept” and “goofy.” “Kids who fit my profile have a difficult adolescence even in a normal junior high school and high school,” he says. “Going to college when I was so young allowed me to have a second career without feeling that I was falling behind. My guess is that there were some doors that were open to me because I had this weird résumé. I can’t say I have any deep regrets. It’s possible things would have worked out better. They certainly could have worked out worse.”