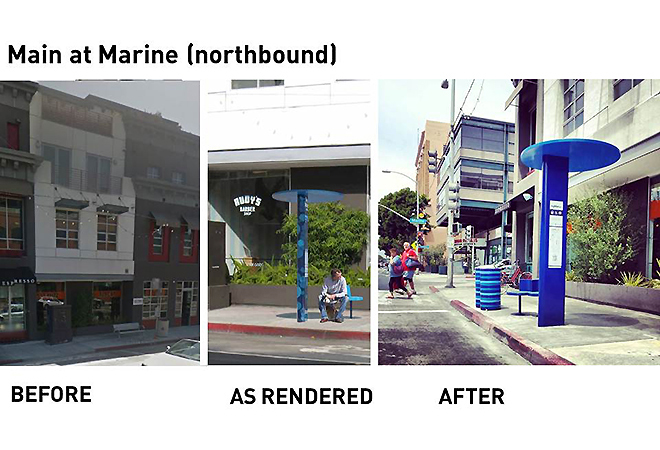 For a long time, the 302 bus stops scattered throughout Santa Monica were nothing much to look at. In 2009, however, Big Blue Bus (BBB) joined forces with Lorcan O’Herlihy Architects for the Bus Stop Improvement Project (BSIP), an effort that would both accommodate riders’ needs (think canopies for shade, trash/recycling bins, and ample seating) while making the stops themselves more pleasing to the eye. But now that the project has (sort of) taken off, SaMo-ites are wondering if things were better before the reboot.

Five years in to a project that was initially slated to take two, patrons and residents are unhappy with the BSIP in terms of design, functionality, and comfort of the 40 or so stops that have been updated since construction began on March 31. So unhappy, in fact, that they took to the Santa Monica Daily Press to express their concerns: the seats have low backs and lack armrests, the canopies don’t provide shade, and the bus shelters are cramped overall. Considering the $7 million price tag, project planners were dismayed to hear it.

“At the low volume stops, we were replacing a pole with a [triangular sign] on it,” said Miriam Mulder, Santa Monica City Architect. “Generally speaking there was no seating and no shade [before the redesign]. I think people were not necessarily aware of that.”

The original plan was to create three different tiers of stops depending on passenger ridership (low, medium, and high volume) with expected renovation of six to 12 stops at a time. Because of the negative response to low volume stops (where construction has already been completed), BBB’s focus is now on converting them into medium volume stops with additional seating and canopies. For the upcoming medium and high volume stops, BBB is looking at installing seats that are wider with better back support. So, how much does all of this restructuring cost? Thankfully, not much.

“One of the really nice things about the design is that you can add and subtract pieces pretty easily,” Mulder says. “As the needs change at different bus stops, you might choose to add another canopy and more seats. It’s not a wholesale change so to speak, but it’s merely trying to roll out what people are expecting from this program.”

Since addressing residents’ concerns earlier this month, 20 re-redesigned bus stops have been opened (most recently last Thursday). It only took a few months for public outcry to result in change, so we’ll have to wait and see if the most recent renovations live up to citizens’ expectations.

To see which stops are currently under construction or are set for future revamping, check out the service alerts listed on BBB’s site.