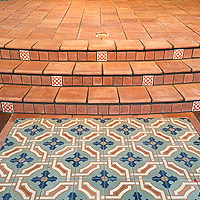 Until now, the Eagle Rock Seventh-day Adventist Church wasn’t much to look at. Wall-to-wall blue carpeting in the main sanctuary reflected years of Sunday foot traffic; a poured concrete entryway did little to welcome worshippers; stark white walls gave the space a sense of sterility rather than sanctity. It was time for a change of scenery.

Enter Seth Matheson, Principal Designer at The Design Directive, who was selected by the church to spearhead a resdesign for the building, which was originally built in 1928 by acclaimed architectural firm Meyers & Holler (you may have seen a few of their other works around town: TCL Chinese theatre, Grauman’s Egyptian theatre, Culver Studios).

“The Seventh-day Adventist community has owned the building since the ‘80s,” Matheson said. “Since then, they’ve brought it up to code, but they’ve always wanted to do a more aesthetic renovation. As the church was originally a Meyer & Holler design, I wanted to honor them with the redesign.”

Matheson’s artistic decisions were driven by the basic structure of the church, which was originally built in the Spanish Colonial Revival style. Being that it is a sacred space, he also hoped to give it a holy vibe. “I wanted to emphasize the presence of God, and I thought lighting would be the best way to highlight the architecture and bring in that feeling.” A significant search yielded some unusual LED lights—ones that gave off a warmer glow due to their lower color temperature—which Matheson submerged into the floor as uplighting. LED tape lighting was also hidden among the arches on the church’s ceiling.

In addition to a lighting scheme, Matheson hoped to return the main sanctuary to its Spanish roots by ripping out the carpet and installing a terra-cotta-esque tile. “Terra-cotta doesn’t wear well, so we went with a concrete tile that mimics terra-cotta, but it’s stronger and requires less maintenance,” Matheson said. Inlaid in the new flooring are auxiliary handmade tiles that Matheson found in Mexico. “They took three months to receive because each tile is cured in the elements,” he said. “They’re extremely well-made; the color on each tile goes a quarter of the way through the material, meaning it won’t wear away even as people walk on it.”

Other aspects of the church that were reimagined by Matheson include the foyer ceiling, which now features a tile pattern printed on burnished gold mylar paper, and skim coating the church’s stucco walls so that they’d mimic old plaster. The new sanctuary boats refinished pews, chairs, and side wings, and the church’s existing ironwork was either modified or replaced to match new materials that were coming in.

In all, the overhaul cost under $200,000, most of which came from member contributions to the project—and they couldn’t be happier with the result. Tomorrow, there will be a redidcation ceremony to bless the finished space. “I can tell that they really cared about the project, each other, and me,” Matheson said of the congregation. “They embraced me as part of the family. It was an honor.”