Home Health More ‘Reopen’ Protests Are Being Planned in California 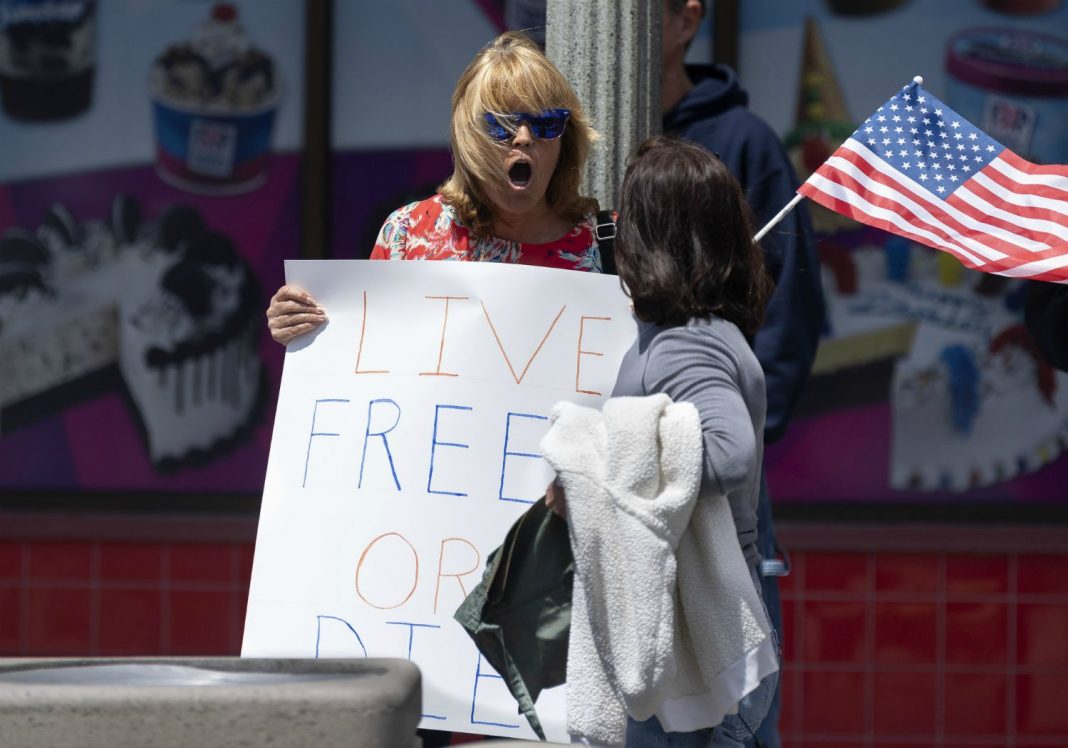 Five marches have been planned for May 1 across California in opposition to efforts to curb the spread of COVID-19. The rallies, coordinated through the private Facebook group Fully Reopen CA Now Movement, will take place in Huntington Beach, San Diego, Ventura, Sacramento, and Los Angeles. The group denies any outside assistance, but similar protests have sprung up in other states with connections to a network of conservative groups, law firms, and donors.

“What I see happening is citizens showing up to stand up for their rights to earn a living and support their family,” says Vivienne Reign, a Newport Beach resident and CEO of a small medical device company who has coordinated the California protests. “Our hope is that everybody shows that you can do so while being trusted to follow these basic guidelines.”

People weren’t quite so trustworthy at protests that took place last weekend; photographs and videos show unmasked attendees standing shoulder to shoulder at times. Reign says that many of those planning to show up in Sacramento will remain in their cars during the protest.

Using the hashtag #FullyOpenCA, the rallies call for the loosening of restrictions on businesses and consumers. “We are losing our small businesses which are the backbone of our economy,” a website for the protests reads. “The shutdown is not warranted, nor sustainable for our area.

Entire portions of the website’s text appear verbatim in petitions and calls-to-action for other states and cities, including Facebook groups to reopen Texas, North Carolina, Washington State, and Kansas City, Missouri. The same language also appears in a petition to reopen Georgia.

“I got a URL and I got a Wix editor and I threw it up in a few hours with some help from some people who are willing to contribute some various texts, just Joe Schmos—no groups,” Reign says.

Other protests have been connected to established conservative advocacy groups like FreedomWorks and Tea Party Patriots—groups instrumental in the Tea Party protests over a decade ago. Theda Skocpol, a professor of government and sociology at Harvard and the co-author of the 2012 book The Tea Party and the Remaking of Republican Conservatism, sees Tea Party fingerprints all over some of the stay-at-home protests.

Discussing previous protests, Skocpol told Vox, “In this case, I suspect we’ve got a similar combination of top-down influence from high-dollar organizations and some genuine energy at the grassroots level. But I also suspect this is mostly being pushed and promoted from above.”

FreedomWorks has deployed its 40 employees to connect local protestors, set up websites for them, and is considering paying for advertisements to boost turnout, according to The New York Times.

Despite the displays of discontent seen at rallies and amplified on social media, the majority of the public is against reopening the country prematurely. Last week, a Politico/Morning Consult poll found that 81 percent of voters wanted the country to “continue to social distance for as long as is needed to curb the spread of coronavirus, even if it means continued damage to the economy.” An NBC/Wall Street Journal poll conducted a few days later showed 60 percent of Americans were more concerned about the government loosening restrictions too fast than about restrictions hurting the economy.

“This crisis is causing extraordinary pain in people’s lives,” Los Angeles Mayor Eric Garcetti said in response to the rallies. “I understand the frustration and share the desire to get the economy moving again and return to our way of life. But saving lives has to be our number-one priority above all else—and we’ll keep making decisions based on the science and guidance from public health experts.”

As of now, the Fully Reopen CA Now Movement Facebook group has 587 members and 356 Instagram followers. It’s unclear how many people plan to attend the rallies.