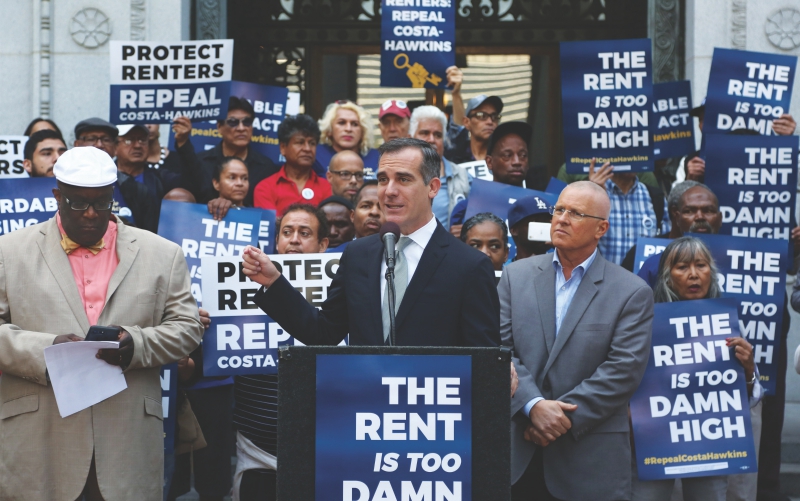 On a Saturday afternoon in April, Nicole Hodgson was sitting at the head of a vast table covered with a dozen or so neat stacks of paper in the back house that serves as the Pasadena Tenants Union’s HQ. She was winding down after a long Saturday spent directing a canvassing operation to get a rent control measure on the Crown City’s November ballot. By now most of the day’s volunteers, clad in green tenants union T-shirts bearing a logo with a rose, had returned with their signature packets, which Hodgson arranged on the table as she double-and triple-checked them. In order for the amendment to qualify for a citywide vote, the organization needed signatures from about 13,000 registered Pasadena voters by May.

That they didn’t get enough is an outcome that Hodgson attributes to having too few canvassers until it was too late, rather than there being too little interest or need. “Everything that we did was done in a very short time,” she says today. “It’s the beginning of the dialogue, and we’re finally getting renters engaged and talking about the housing crisis.”

Hodgson’s effort is part of a larger push in cities throughout Southern California—including Long Beach, Santa Ana, Pomona, Glendale, and Inglewood—to strengthen tenant protections against unfair landlord practices. In fact, a statewide ballot measure challenging California’s CostaHawkins Rental Housing Act—established to shield landlords from rent control on buildings constructed after 1995, among others—will be put before voters in November. If the measure passes, cities will be allowed to extend rent control to virtually all rental homes in the state.

L.A., West Hollywood, and Santa Monica all have ordinances on the books to protect renters in some buildings; L.A., for instance, limits rent hikes in apartments built before 1979 to 3 percent annually. Yet rent is at an all-time high in much of the region. Wages aren’t keeping up, and people are feeling squeezed. California has lost a million residents to other states over the past decade, according to the state Legislative Analyst’s Office, which cites high housing costs as the primary reason.

“The fundamental question we are asking residents is, ‘What do we want the city to be?’” —Nicole Hodgson

A one-bedroom apartment in L.A., where roughly 54 percent of people rent, is about $2,100 a month on average. In Pasadena, it is about $2,250. Though the Crown City may be known for neatly landscaped streets lined with stately houses from another era, the majority of its 142,000 residents rent their homes in multifamily buildings. “We’re 57.1 percent of the households in the city. If we’re gone, that changes the place significantly,” says Hodgson, a blond forty-something clinical social worker. The amendment she was advocating would have limited rent increases to 4.5 percent year over year, and landlords would have been able evict tenants only with “just cause.” “The fundamental question we are asking residents,” she says, “is, ‘What do we want the city to be?’”

Dan Yukelson, the executive director of the Apartment Association of Greater Los Angeles, isn’t persuaded by such arguments. “Rent control never does anything for affordable housing. That’s a complete fallacy,” he says, pointing out that the policy can lead to higher rents and to lower mobility rates since tenants with rent-stabilized units tend to stay put for longer periods of time than those without. A 2017 Stanford University study that evaluated San Francisco’s rent-control policies found they have likely exacerbated certain housing problems by motivating landlords to take rent-stabilized units off the market, causing a general rise in rents. But it also found that rent caps are the only thing keeping relatively low-income tenants in their homes. “Absent rent control, essentially all of those incentivized to stay in their apartments would have otherwise moved out of San Francisco,” the authors concluded.

Yukelson’s remedy is to build more units and let the market decide. “We all live in a capitalist society here in America, and you can’t fault people for making investments and expecting some kind of return on them,” he says. L.A. and Pasadena have seen scores of new apartment buildings go up recently, with many more on the way. It’s the details about where to put that housing, what it should look like, and how much it will cost to live there that tend to spark ferocious debate.

For her part, Hodgson isn’t directly focused on creating new affordable housing. She’s trying to keep people from being displaced from where they already live. Because simply moving farther away in search of lower rent isn’t always an option in a region where traffic is so bad. Looking forward, she’s optimistic. While a repeal of Costa-Hawkins won’t actually help her cause in the short term—after all Pasadena has no rent control, regardless of whether a building is new or old—it certainly could down the line.

“We will regroup and begin planning the next phases of our campaign,” Hodgson says. “It’s definitely not over because the housing crisis is definitely not getting any better.”

RELATED: Where Do People Move When They Leave California?