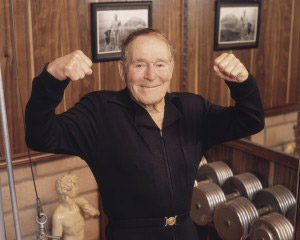 Fitness icon Jack LaLanne passed away over the weekend. He was 96.

LaLanne was profiled, along with the local “pioneers that made Southern California the center of the physical world,” in “Survival of the Fit,” a photo essay photographed by Dan Chavkin and written by contributing writer Dave Davis in January 2002. Here is what we said:

Jack LaLanne steps into the hotel elevator and smiles. Without warning, he grabs the side railings, hoists his legs perpendicular to his trunk, and locks his arms. He holds the position for five seconds, exhales, then lowers himself to the floor. The message is clear: At 87, with two artificial knees, LaLanne is in better shape than you’ll ever be. He’s shrunk some—standing five feet four—but his blue jumpsuit covers his taut chest like Saran Wrap. His eyes are clear, his skin glows, his handshake’s a nutcracker. “Billy Graham talks about the hereafter,” he says. “I’m for the here and now.”

LaLanne has preached that gospel for nearly seven decades, since he opened one of the first health clubs, in Oakland, and worked out at Santa Monica’s Muscle Beach, the birthplace of the modern fitness movement. Blessed with its climate and culture, Southern California remains the center of the physical world—and LaLanne remains its godfather, presiding over three generations of exercise pioneers.

In the 1930s LaLanne, Steve Reeves, Les and Abbye “Pudgy” Stockton, and other “health bohemians” gathered south of the Santa Monica Pier at a long, wooden platform constructed by the Works Progress Administration. There Muscle Beach celebrated the body in its sunbaked glory. Young men (and a few women) showed off their prowess by performing acrobatic and gymnastic routines. “Weights were taboo then,” Les recalls. “People thought they would hurt your heart or make you muscle-bound. With women, it was thought they would become masculine-looking.”

The beach’s denizens, led by Reeves, a bodybuilder turned Hollywood hunk, changed all that. Their physiques were not only symmetrical but functional and gorgeous—and seemed attainable, if you made the effort.

Muscle Beach disappeared in the late 1950s, although a version ended up in Venice. By then its alumni were revolutionizing the fitness business. From KTTV in Hollywood, LaLanne used the new medium of television to exhort housewives to “get up, exercise, and feel good!” His buddy Harold Zinkin invented the Universal weight-training machine. Reeves revealed his pecs in countless sword-and-sandals films. Joe Gold founded a gym that became the “iron game” equivalent of Gertrude Stein’s salon.

Today LaLanne lives in Morro Bay with his wife, Elaine. He still promotes his regimen—regular exercise and a healthy diet—and works out for two hours a day, beginning at 5 a.m. “It’s never too late to take care of your body,” he says. “I don’t care if you’re 90 years old–it’s never too late.”