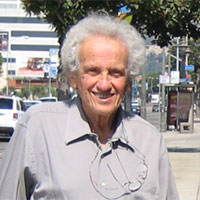 Dr. Paul Fleiss passed away last Saturday at the age of 80, and there is much to praise about his long and legendary career. Long before it was hip, Dr. Fleiss advocated a parenting approach similar to what is now called “attachment parenting,” and two of the top pediatricians in the country started in his office (Harvey Karp and Jay Gordon, who wrote a moving tribute about his mentor for the Huffington Post this week). Yes, he had some famous patients (a few even appear in the large collection of patient photos displayed proudly in his office) and there was the scandal with his daughter, Heidi, but those are only the newsiest details in Dr. Fleiss’s story. What I’ll remember instead is a man who worked a job he loved, had a family he adored, and rode his bike almost to the very end. I didn’t know him outside of his office on Hillhurst Ave., but I know from personal experience—Dr. Fleiss was my family’s pediatrician since I had my first child in 2010—that he gave his patients much more than great medical care.

More than one parent I know has likened visiting Dr. Fleiss to climbing atop a mountain to speak with a guru who offered ageless wisdom whether or not you knew which questions to ask. From my OBG office in Beverly Hills to my pharmacist in Silver Lake, his name was always greeted with respect when I mentioned he was my kids’ pediatrician. His care spanned generations, and was gifted for free to families without insurance or the means to afford it. His practice made Los Feliz Village, well, a village, not only for the longevity of his career and the number of people he served but for the quality of the experience he offered.

What made Dr. Fleiss special was the obvious affection he had for his work. Not only could I call his office and get an appointment in mere minutes, he also gave me his cell phone number (what doctor does that?) and never minded when I dared to use it, after midnight, because one of my girls was barking like a seal (she had croup, it turned out) or because one had consumed an unidentified cleaning product. I’d been headed for the emergency room both times, but having Fleiss’s phone number saved me the stressful trip (not to mention the expense). His advice was often unconventional—prevent colds and infections by putting breast milk up the nose, treat allergic reactions with water and conjunctivitis with chamomile tea bags—and it usually worked.

But as my infants grew into toddlers, visits to Dr. Fleiss became less about me getting medical and emotional support and increasingly about my daughters’ interactions with him. My eldest, who was born inclined to give strangers a stink eye, adored him, insisting that we bring him a packet of Trader Joe’s seaweed (her favorite snack) at every check-up. So much of the way he communicated with children was non-verbal; he gained their trust by taking his time—always overshooting the standard 15 min allotted for an appointment—and with an array of techniques he had either refined over the years or knew instinctually, like letting the kids touch all the medical instruments, holding back until they were ready, and allowing them to stay in the parents’ arms during the exam. And yet, for Dr. Fleiss there was no magic to it. He simply treated children with respect, kindness, empathy and love.

I am lucky to have two healthy children, and that makes my family’s experience as patients of Dr. Fleiss ordinary, not special. But he saved my husband and me with his unwavering confidence in our abilities. He assured us that we have the ability to take care of our children, that their needs were simple and their bodies perfect. He calmed me when I couldn’t figure out how to breastfeed and when my newborn daughter wouldn’t sleep without being held. When my children clung to me, he didn’t chastise their lack of independence—he praised it. “Look how attached she is!” he’d exclaim. He reminded me to feel joy, not anxiety, about this gift I’d been given.

Dr. Fleiss took care of our children and he took care of us, too, by slowing us down to enjoy the rough-and-tumble times of parenthood and reminding us how quickly childhood would pass. His office, which is staffed with some of the kindest people I’ve ever met and which he would open before or after regular hours for patients in need, gave the families under his watch—like mine—the community it really does take to raise kids. From that Los Feliz bungalow, he expanded our capabilities not just to care for our kids, but also to love them with full, if sometimes insecure, hearts.

A public memorial for Dr. Fleiss will take place Friday, July 25 at 9 a.m. across from the Trails Café in the Fern Dell section of Griffith Park.