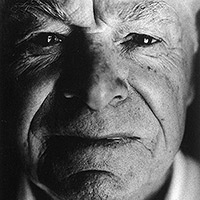 William F. Thomas, the top editor at The Los Angeles Times from 1972 to 1989, died Sunday. Thomas’ son, Peter, confirmed that he suffered from congestive heart failure. He was 89 years old.

Thomas, who was with the Times through the Watergate scandal as well as Ronald Reagan’s presidency, was the driving force behind the paper’s rebirth as a national authority rather than a regional broadsheet. Under his leadership, the paper brought in eleven Pulitzer prizes. “The paper came a long way in broadening its dimensions,” Thomas told us in 2000. “Otis Chandler kept saying, ‘Jesus, Bill, these long stories are going to turn the readers off.’ I kept saying these are our strengths. I hated stories that left questions.”

In May of 2008, we interviewed Thomas along with five other former Times editors for a feature titled “Ripped From the Headlines.” At the time, real estate maverick Sam Zell had just taken over a paper struggling with an excess of problems, and each of the six men we interviewed had something to say about it. Read Thomas’ frank dialogue with writer RJ Smith below.

MY TIME AS EDITOR WAS DELIGHTFUL. When I was there, we had a publisher who was totally supportive, both in financial and in general terms, all the way around. His name was Otis Chandler. I was editor for 18 years, and I think in my first year he told me he wanted me to run my job as I saw fit; he didn’t intend to interfere unless something was cataclysmic. We could put out the paper we wanted to put out with few restraints and lots of encouragement.

As for saying “bleep you” to an employee, which Mr. Zell has apparently done: Heavens, Otis would never have done that. I can imagine him saying it to me afterward, but in private. Otis, although no prude, was propriety personified. He was a hell of a good guy.

I’ve heard my motto is supposed to have been “do it once, do it right,” but I never told anybody that. Everybody who worked for us had the idea that they didn’t ever want to get it wrong. Not anything. The errors page was a very galling place for anybody who ever showed up on it, and it should be that way. People are going to make mistakes, you can’t fault people—you just have to be aware of their limitations and strengths and work with them. That’s really an important thing. People have distinct strengths, and you have to put them in the right job that they can do and keep them away from the things they can’t do. We had reporters who were wonderful biographers and personality profilers—and they could explain people but were just no damn good at expository writing. So you assigned them to their strengths. We had a few people who could do anything, too.

“Mission statement.” I have always hated that expression, and the idea of “the vision thing.” But to boil it right down, you had to make the paper as good—as complete, thorough, and accurate—as you possibly could. And interesting, too. That meant you never really had enough of anything.

Back then there was a feeling of almost endless limits, which is a bit different from where the industry is today. The budget had to be sensible. You had to submit it and defend it going in. But I never experienced any real restraints on anything we wanted to do for budget reasons. Maybe my ambitions were too small! We put in a flock of new bureaus all over the place, the travel budget was going up. The only limit I recall was when they started enforcing a “no-first class” rule. You used to be able to fly first class if your trip was more than 1,000 miles, and they changed that. Pretty tough, huh?