UPDATE: JANUARY 25, 2021, 2:15 P.M. – At a briefing on Monday afternoon, Board of Supervisors Chair Hilda Solis confirmed that Los Angeles County intends to largely align with state reopening guidelines. That means, with the regional stay-at-home order lifted, the county will allow activity permitted for counties in the purple tier–including outdoor dining–to resume.

As of today, some additional activities will be permitted, including outdoor fitness and recreation activities, and outdoor private gatherings of multiple households. 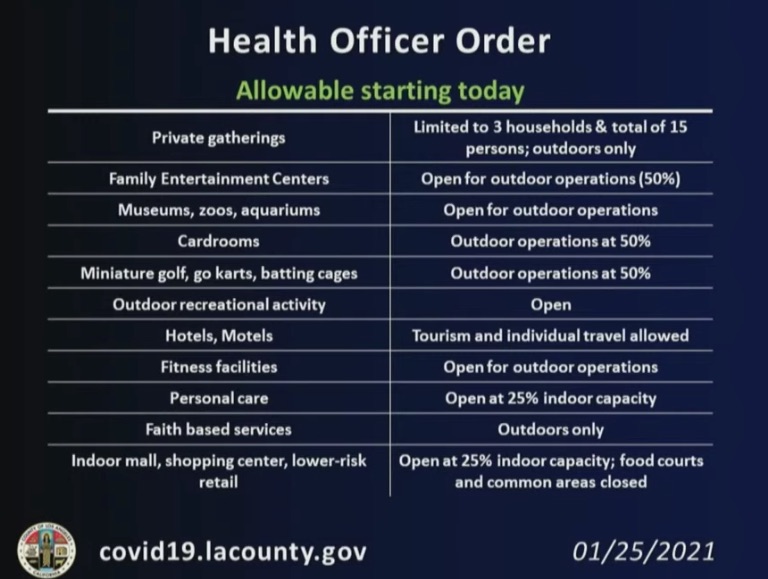 A new Los Angeles County Health Officer Order will be issued on Friday, which will allow restaurants to reopen for outdoor dining and will roll back the nighttime hour restrictions which were put into place.

The decision to allow some reopening is based on some positive indicators shared by the county’s Public Health Director Barbara Ferrer, which suggest that the worst of the winter surge may be passing, including recent declines in hospitalization and in test positivity rates.

Nonetheless, Ferrer noted, individuals and businesses must still exercise extreme caution, and continue to be wary of exposure.

“We strongly encourage everyone to follow every single protocol in place and do what we know will reduce transmission,” Ferrer noted. “This is not the time to think we can get back to normal business. If we’re not careful, our metrics that are headed in the right direction can change.”

“California is slowly starting to emerge from the most dangerous surge of this pandemic yet, which is the light at the end of the tunnel we’ve been hoping for,” Dr. Mark Ghaly, California Health and Human Services Secretary, said. “Seven weeks ago, our hospitals and front-line medical workers were stretched to their limits, but Californians heard the urgent message to stay home when possible and our surge after the December holidays did not overwhelm the health care system to the degree we had feared.”

Lifting the regional stay-at-home order means the state will return to the county-by-county, color-coded tier system of regulatory tiers that was in place before December 5. Based on the L.A. County’s case numbers and positive test rate, it would likely be in the most restrictive purple tier.

In making the decision to lift the regional order, state officials cited internal projections that even the hardest-hit regions, Southern California and the San Joaquin Valley, will have greater ICU capacity within four weeks. Southern California’s ICU capacity currently remains badly strained according to figures reported by the Los Angeles Times.

County supervisor Janice Hahn said Monday that she supports dining resuming on outdoor patios. “We should align ourselves with the state as much as possible which means, among other things, reopening outdoor dining with commonsense health protocols in place as soon as possible,” she said in a statement. “The restaurant industry was devastated by this lengthy shutdown and I know this would be welcome news to them.”