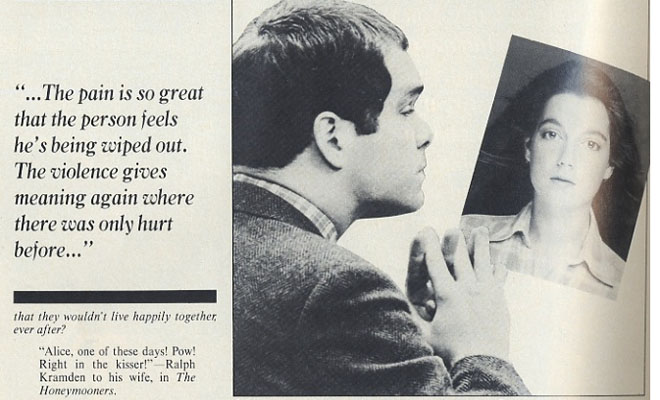 You’ve been in the relationship for a while. He seems like a nice, gentle guy. Except. There was that time, during that horrendous argument, when he hurled the vase you loved against the wall, smashing it into a million jagged shards. Afterward, you wondered. Would he ever hit me?

Such things are difficult to predict, a great many factors being involved, but there are several danger signals—red flags, if you will—that can mean that a person is veering toward violence. Unfortunately, most of us are good at paying them heed only in hindsight.

According to Westwood clinical psychologist Andrew Erlich, these are some things to look out for:

If several of these red flags are displayed, the danger may be imminent. Urge the person to seek advice and counsel from a psychologist, psychiatrist, clergyman, someone. In the vast majority of cases, it’s a matter of the person learning to rechannel his emotions in more constructive directions—of leaning a new vocabulary of nonviolence.

“Education is the number-one antidote,” asserts Erlich, who notes that a mere five percent of the millions spent each year in the mental health field go for community intervention work of this type. “You’ve got to get people talking about their violent feelings, and you’ve got to get to the kids early on to teach them other ways to handle their frustrations.”