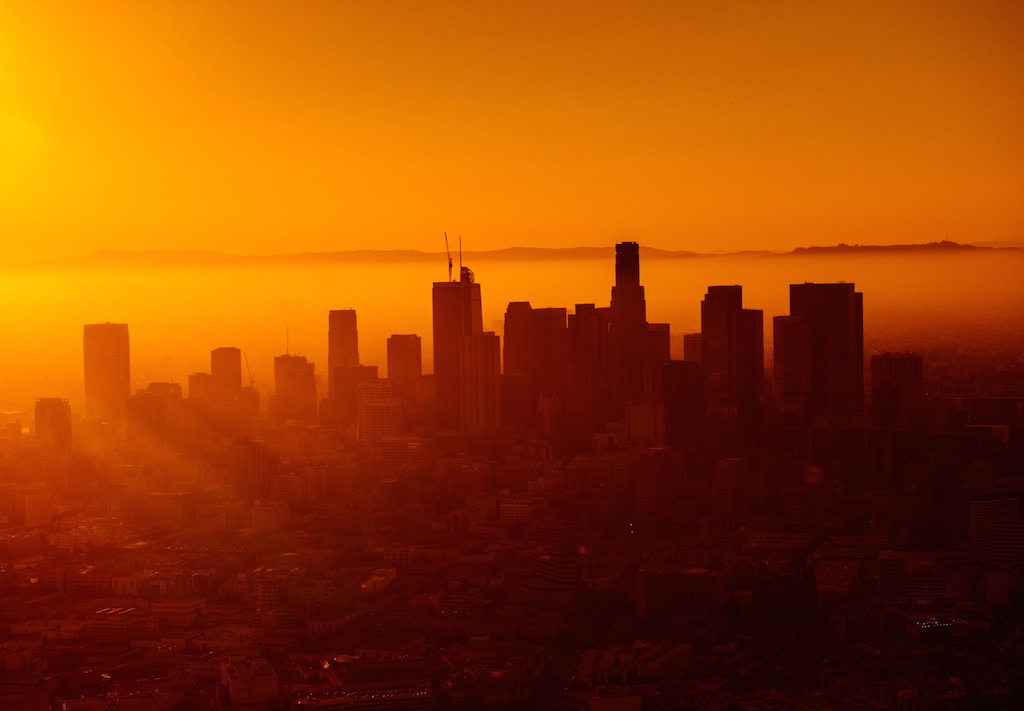 The idea that Los Angeles has no seasons but exists in a eternal spring-summer is an old saw that is mostly foisted on us by Easterners. Maybe the snow and tornado-hardened nabobs of negativism just don’t have our gentle sensitivity to subtle shifts in the light as the season changes.While traditional signifiers of the seasons like changing leaves and snow may be important to greeting card creators, here in L.A. we instinctively sense the passage of time by the quality of light.

To understand this phenomenon more completely, read Lawrence Weschler’s brilliant essay “L.A. Glows,” which first appeared in the February 23, 1998 issue of the New Yorker and is also included in the superb anthology Writing Los Angeles, edited by David Ulin. While looking at the wide-angle “astroview” map below, envision this scene from the essay: “The sun rises over the desert and sets in the ocean” and along the way creates “a golden pink off the bay through the smog and onto the palm fronds.”

That golden pink glow is enabled by the specific climate conditions of the Southland. The clockwise movement of a cold ocean current down the California coast causes cool air to drift over the coastal plain and get trapped beneath the warmer inland air. This causes a thermal inversion between the mountains and the sea and makes for very stable air in the basin.

The haze we take for granted settles in this stable air and fractures light in a way that minimizes shadows to the delight of cinematographers. Astronomers also revel in these climate conditions, which reduce atmospheric distortion; some three-quarters of the most significant discoveries in astronomy have been made in Southern California. This light effect is the reason the mountains almost look to be within arm’s reach on certain days—as they do in their rendering on the map.

Of course, there are other days when the atmosphere looks like soup. That effect is due to something called “airlight,” which is simply the reflection of sunlight off particles of smog. Yet even the unique light of this “diaphanous soup” lends itself to a meditative state. The incomparable Vin Scully notices this blissful quality of light in his description of the sun setting off third base: “The air turns purple tinged with gold, as out over center field the purple mountains resemble a painting by Frederick Remington.” Non-natives, however, have complained about the trance-like luminosity; Orson Welles once said, “You sit down you are 25, you get up you are 62.” (Yes, that has happened to me.)

Without a doubt the best description of Los Angeles light, though, is that of writer/historian D.J. Waldie, who describes four separate kinds. It is so good it demands the full quotation:

“To begin with, there’s the cruel, actinic light of late July. Its glare cuts piteously through the general shabbiness of Los Angeles. Second comes the nostalgic, golden light of late October. It turns Los Angeles into El Dorado, a city of fool’s gold. It’s the light the tourists came for, the light, to be more specific, of unearned nostalgia. Third, there’s the gunmetal gray light of the months between December and July. Summer in Los Angeles doesn’t begin until mid-July. In the months before, the light can be as monotonous as Seattle’s. Finally comes the light, clear as stone-dry champagne, after a full day of rain. Everything in this light is somehow simultaneously particularized and idealized: Each perfect, specific, ideal little tract house, one beside the next. And that’s the light that breaks hearts in L.A.”