Home Uncategorized Read All About it: L.A.’s Media Community Makes Room for the “Los... 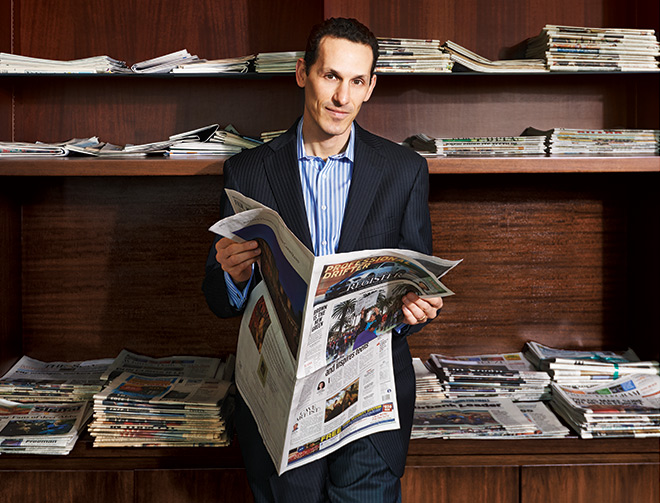 Aaron Kushner was a stranger to the newspaper industry when he acquired the Orange County Register two years ago. Nevertheless the 40-year-old entrepreneur and investor brought to his new venture a deep familiarity with greeting cards—which for his journalistic purposes is arguably more relevant. Puppies, hearts, and flowers figure prominently in the sentimental offerings of Marian Heath Greeting Cards, a purveyor of birthday, anniversary, get-well, and holiday wishes that Kushner took over and began turning around in 2002. As the Register’s publisher, he has extended this warm, supportive tone to Orange County’s leading daily. Now he’s spreading it farther north, to our town, with the debut of the paper’s L.A. edition.

Kushner has branded his approach “community building.” “It’s a mind-set that not just your reporters but your entire business staff brings to thinking about how we grow our business,” he explains. “Which is thinking about not just what’s going on in the community, but what’s happening that’s going right. How do we share the lessons, inspiration, joy that are part of everyday life—and part of both typical classic leaders and often unrecognized leaders in the community?”

The Los Angeles Register will focus on local news, an area so forsaken by the Los Angeles Times that on a given weekday, its LATExtra section has contained as few as two articles devoted to goings-on in L.A. County. Unlike the Times, which still publishes strong investigative stories, the L.A. Register probably won’t be serving its readers a diet rich in unearthed waste, injustice, and corruption. At one editorial meeting last year, Kushner made clear to his assembled O.C. staff that in his view, it’s decidedly not the job of newspapers “to comfort the afflicted and afflict the comfortable.” As for the L.A. Register’s opinion pages, Kushner promises a “right-of-center” slant, which he regards as a healthy alternative to the perspective of the Times.

The publisher is content to let the consumer decide whether his package of local reporting, sweet civic feeling, and conservative commentary can prevail in an ailing newspaper market. “A city, ultimately any city,” Kushner says, “gets the newspapers that it deserves relative to the newspapers it supports.”