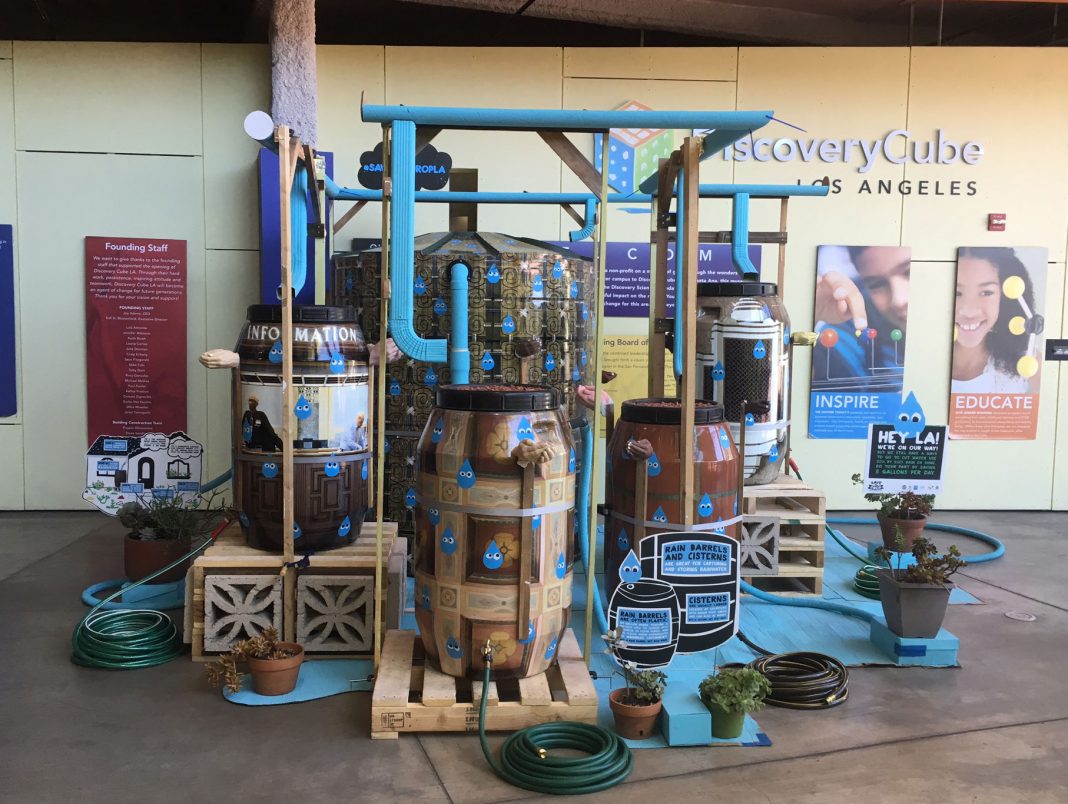 As California verges on five years of historic drought, the state needs some extra TLC this Earth Day weekend. Los Angeles’s Discovery Cube will host an event today featuring a rain cistern installation by local artist Scoli Acosta, which had previously been on display in Union Station. In addition, Acosta, along with representatives from the Mayor’s Fund for Los Angeles (MFLA) and the non-profit TreePeople, will be speaking to kids until 2 p.m. on Saturday about the importance of eco-friendly art.

Earlier this year, Acosta partnered with MFLA’s Save the Drop campaign to display his sculpture, which features a 865-gallon rain cistern and four 55-gallon rain barrels, at Union Station throughout the month of March. The partnership represents one of the many enterprising ways in which the city has prompted Angelenos to stop and think about their water consumption, allowing commuters to interact with sustainable art as they pass through the station.

“It’s a delightful and surprising partnership, and we hope that the connection the installation makes between beauty and conservation inspires people to capture water during the rainy season and beyond,” said MFLA president Deidre Lind.

To create the installation, Acosta took inspiration from its original Union Station home, wrapping the cistern and barrels in vinyl images of the location (one barrel resembles the station’s information booth). “The sculpture is a reflection of the poetics of resourcefulness,” Acosta said. “On a personal level, channeling and working with the natural processes of our environment makes me feel less lonely. It makes me feel like a part of something.”

Acosta said the experience has helped him learn more about using rain as an the opportunity to conserve water, which is particularly important during an El Niño year. “I understand more about using rain barrels and how it’s not only about storing water for later use, but also taking responsibility for the direction of the water once our tanks are full,” Acosta said. “The more water we can keep out of our sewers and going into our gardens and grounds, mimicking nature, the better.”

Over the past year the Save the Drop campaign has encouraged Angelenos to rethink their relationship to water by partnering with the L.A. Department of Water and Power, the Bureau of Sanitation, and Department of Parks and Recreation to help the city reduce water usage by 19 percent in the past year, on their way to Mayor Eric Garcetti’s goal of cutting 20 percent of water usage by 2017.

Lind attributes the city’s progress to drought-tolerant plants as well as the implementation of nearly 4,000 rain barrels and rebates for nearly 5,000 high-efficiency toilets.

“Angelenos have really risen to this challenge,” Lind said. “The region has seen some rain, but rainfall rates are still below average and experts predict we will be entering our fifth year of historic drought.”

Acosta’s installation will be on view at Discovery Cube through May 9.