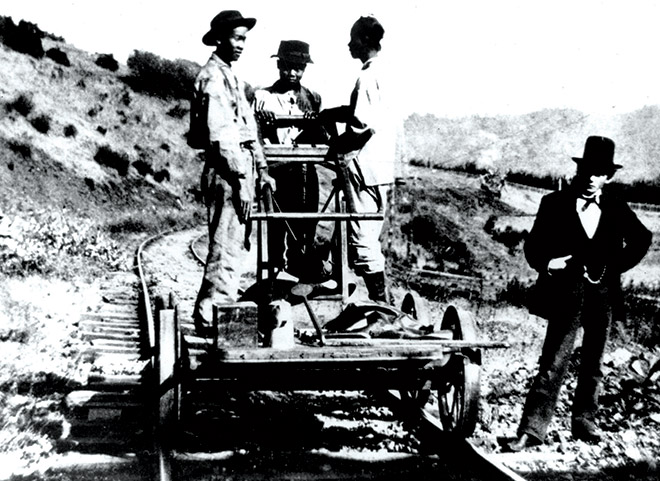 On June 22, 2005, workers in Boyle Heights began digging up the driveway of the Los Angeles County Crematory, just outside Evergreen Cemetery. The Gold Line’s Eastside Extension would emerge from underground there, and 1st Street had to be widened to accommodate the tracks. At about ten o’clock that morning, a worker spotted bones in the dirt beneath the driveway. They were human bones. Construction halted. The project’s archaeological monitor determined that the remains were “isolated limb bones” and permitted the crew to recommence digging, but they found more bones, lots of bones, and the next day they uncovered what appeared to be a coffin.

For the following several months only archaeologists hired by Metro would dig there, unearthing the full or partial remains of at least 130 individuals. Sometimes they encountered complete coffins. The wood disintegrated swiftly into fragments. Whatever clothing the dead had worn had rotted off. The buttons remained: “over twenty styles of American buttons were present,” said the archaeologist’s report, “along with the traditional ball button type of Chinese buttons.” They found several headstones, three bracelets, two earrings, three rings, six bullets. They found coins, wallets, eyeglasses, teapots, pocketknives, rice bowls, wine bottles, perfume bottles, opium and tobacco pipes, a photograph preserved between two sheets of glass.

Someone had clearly messed up. Nobody was supposed to be buried there. The consultant hired to excavate and examine the remains blamed the consultant contracted to write the environmental impact report. The latter consultant was dead. The real dereliction went deeper. In 1877, when the city took over five acres of the southeast corner of Evergreen Cemetery for the entombment of its indigent dead, Chinese couldn’t be interred inside the cemetery, where such notables as the Lankershims and the Van Nuyses preferred to decompose in the comfort of racial purity. So the Chinese were buried in the potter’s field beyond the fence with the poor whites and the amputated limbs. L.A. was as segregated in death as in life.

People like to move. Our lives depend on it. There’s stuff to do and things to buy, everywhere but here. The feet, though, are a problem. They’re slow and given to bunions, blisters, hammertoes. So we built a railroad. Or rather, laborers did, many of them Chinese. The trains brought more people, all of them with feet. We built more, a whole system of trains and electric trolleys, tracks spreading across the young city like a net. Of course we didn’t build them: Laborers did, many of them Chinese. Then came the automobile. Cars were sexier than trolleys. Faster, too. Asphalt covered the tracks. The people kept coming. There were too many cars. No one could move. Someone remembered trains. They weren’t sexy, but they did get around. Hence the Gold Line.

But let’s back up. In 1865, the Central Pacific Railroad was in dire need of men to blast through mountains and lay the tracks that would eventually connect the eastern states to Sacramento and points south. “A large majority of the white laboring class on the Pacific Coast find more profitable and congenial employment in mining and agricultural pursuits than in railroad work,” wrote Central Pacific president Leland Stanford. He and his partners recruited thousands of impoverished laborers from southern China. “More prudent and economical,” Stanford opined, “they are contented with less wages.” In what would become a familiar pattern, immigrants brought to the United States to perform dangerous and unpleasant tasks for pay that whites would not accept would soon be considered a contaminating threat.

The Chinese were thanked for their sacrifices with a series of discriminatory laws. In 1870, Congress effectively prohibited them from becoming citizens and, five years later, prevented the wives of Chinese laborers from entering the country. In 1882, the legislature took this exclusion a step further, forbidding any additional Chinese migration to the United States: “in the opinion of the Government of the United States the coming of Chinese laborers to this country endangers the good order of certain localities.” State law added other indignities. By the early 20thcentury, California’s Chinese were forbidden from testifying against whites in court, marrying whites, and owning land.

In 1876, when the Southern Pacific linked Los Angeles to the rest of the country, the city had a segregated Chinatown of several hundred residents. (There were a few more prior to L.A.’s first race riot, in 1871, when a mob of 500 lynched 18 Chinese.) They worked in laundries, as field hands, and as gardeners. They helped construct the intercity railroad system. Part of the current Gold Line, says Gilbert Hom of the Chinese Historical Society of Southern California, “takes the route of the old L.A. to San Gabriel railway. That was graded by Chinese labor, maybe some of the same laborers whose graves were disturbed.” The irony isn’t new: The city’s original Chinatown was destroyed in 1933 to make way for Union Station. Its remains, sealed off 14 feet beneath the tracks, were unearthed in the late 1980s during excavations for the Metro Red Line tunnels.

By 1922, when the county began cremating its poor instead of burying them, more than 11,000 people had been laid to rest in the potter’s field at Evergreen, in several layers, one atop the other. Many of the Chinese—“probably the vast majority,” says Hom—were disinterred and shipped to China by their relatives. For decades, though, members of L.A.’s Chinese community continued to visit the remaining graves each year. In 1964, the county sold the land back to Evergreen, and the cemetery covered the graves with infill. When families returned to pay their respects, they discovered that the Chinese graveyard had vanished.

Now, if you like, you can take the Gold Line to the Indiana Street station, walk north a block, and hang a left on 1st. Across Lorena, behind a barbed wire fence, you’ll see the crematorium: a plain, rectilinear beige building fronted by two brick chimneys. There’s not much else to see. The excavation site, beside the driveway and behind a low retaining wall, has been planted with grass that is green and lush. If you look hard, you’ll spy, on the fence post at the corner, a granite marker in English, Mandarin, and Spanish explaining that the Chinese whose rest was interrupted here in 2005 have been reburied inside the cemetery.

Walk around to Evergreen’s gate on 1st Street and circle back along the curving lanes between the headstones through the cemetery, which, despite its name, for most of the year is brown and dry. In the southeast corner you’ll find the spot. A concrete wall bears a plaque dedicated to the city’s “courageous pioneers.” In front of it are 12 lines of stone markers, flush with the earth, each inscribed with a few words (“Paz y Amor,” “Rest with Dignity”) in Spanish, English, or Chinese. The cemetery, if little else, has at last been fully integrated.

Riding the Gold Line, it’s hard not to think that maybe movement is the problem. Maybe we have enough trains and the freeways are already too wide. Twice a day Los Angeles witnesses a vast internal migration: Early each morning millions leave the south and east for the Westside and the hills. They wash the dishes there, answer the phones, change the diapers, mow the lawns, head home again at dusk. Movement keeps us segregated. Segregation keeps us moving. Whiteness and money hug the coast and the hills. Maybe we should all stay still and divvy up tasks in a more equitable fashion. Think it over. You should have plenty of time, inching toward that exit ramp.