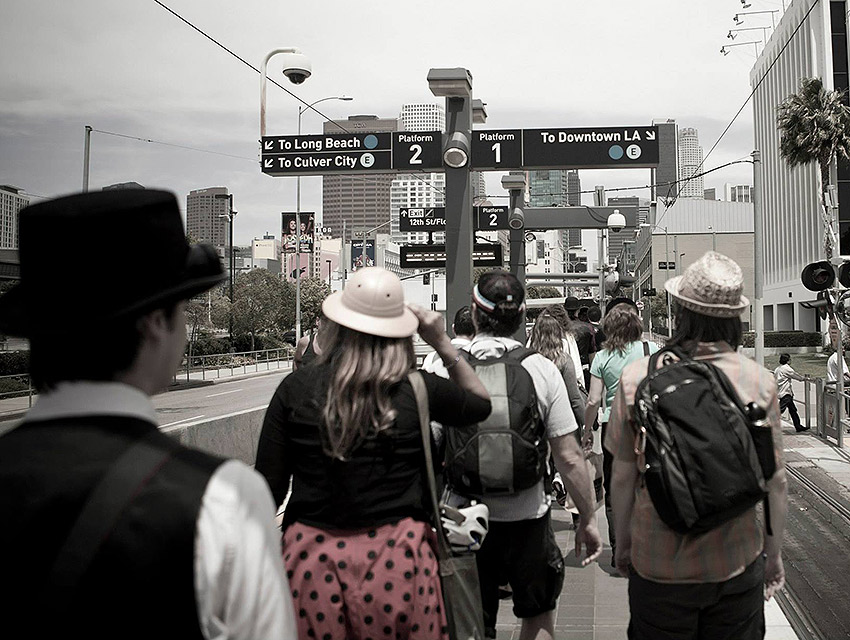 In Los Angeles, the traffic struggle is cripplingly real. Public transportation alternatives exist, but for some reason, Angelenos seem content to suffer the congestion rather than save money (and sanity) by riding the Metro. Why? According to railLA chair Jeremy Stutes, it comes down to one very L.A. concept: image.

railLA, a non-profit, public benefit corporation, is focused on increasing public awareness of transportation alternatives and promoting the integration of high-speed rail into Los Angeles. With activities like last weekend’s “Dapper & Flapper: A New Tour of Old Hollywood,” the organization seeks to challenge misconceptions about public transportation and educate Angelenos on the benefits of local and high-speed rail. During the tour of L.A.’s historic sites, guests and railLA organizers rode the subway between stops while dressed in costumes from the 1920s, with women donning flapper dresses and men sporting stylish fedoras. Stutes said most attendees on the tour were first-time riders of public transportation.

“The idea is to shift that public mindset about public transportation where only people who are ‘scummy’ and ‘grisly’ are on the public transit. ‘Oh, I don’t want to ride the transit because it’s dirty, it’s gross, it’s scary.’ You hear these things over and over and they’re myths. They’re just perpetuated by the phrases that we say,” Stutes said. “So we’re shifting that. We’re saying, ‘No, dress up to ride the train. This is a fun experience.’”

Tour stops included the Walk of Fame, the El Capitan, Chinese and Egyptian Theatres. The group stopped at the Hollywood and Vine subway station to speak with Michelle Boehm, the Regional Director of the Southern California High-speed Rail Authority. Despite community concerns that the integration of high-speed rail will change rural lifestyles, Boehm said that putting rail stations in urban areas would help to increase connectivity with existing rail and bus systems, thereby bettering the entire spectrum of transportation systems as a whole.

“Recently, the national secretary of transportation, Secretary Foxx, was in Los Angeles, and he cited a recent Harvard study that indicated that the single most determinative factor in someone’s ability to emerge from poverty is their access to transportation, and I think that is really profound,” Boehm said.

If nothing else, railLA’s mission is convicting. Metro deserves another look—our traffic-numbed minds will thank us.

Those Weird L.A. Metro Ads Reminding You Not to Be an A-Hole Are Back

Why Doesn’t L.A. Have Any Open-Top Double-Decker Buses for Public Transit?