Home Uncategorized Q&A: David Nazarian on Giving Back to His Alma Mater 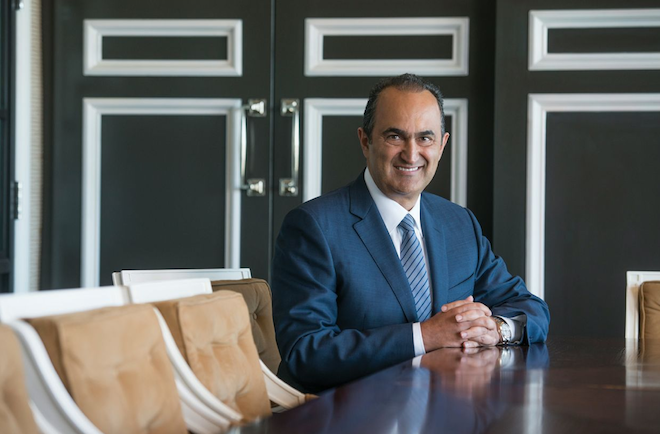 Most people in the hospitality sector are familiar with Sam Nazarian’s work. He’s the restaurateur and developer responsible for SBE, which has produced the SLS Hotel, Hyde Lounge (Las Vegas), and several restaurants in L.A. and around the country. But it was Sam’s older brother, David, that paved the way for this generation of the Nazarian family to succeed in Los Angeles.

After the Iranian Revolution in 1979, David Nazarian fled the country and enrolled at California State Northridge (CSUN). He majored in finance, and right away “was inspired by the environment and professors.” After earning his bachelor’s degree in 1982, he enrolled at USC to get his executive MBA. But the elder Nazarian says it was CSUN that is responsible for his success. He now runs all of the family’s businesses, which are a staggering collection of high (SBE) and low (fast food franchises) dining operations, the country’s largest water desalination plant, and ventures in manufacturing, infrastructure, aerospace, and others.

Last week, David Nazarian announced that he was donating $10 million to fund programs within CSUN’s business school. Reached by phone, he was grateful for the opportunity to discuss giving back.

You’ve just donated a great sum of money to your alma mater. Why now, and why this university?
CSUN gave me the platform for my success in this country, so it will always have a place in my heart. I’m involved in a few non-profit organizations and give money to other programs, but I wanted to make a statement with this donation. The university needed help to expand their curriculum and offer more to students. It’s my chance to give back to the next generation of students so they can have the opportunity to be where they want to be, to achieve their own success story.

What was memorable about your time at CSUN?
It was the school that gave me a passion for business. I’ll never forget, the first professor said to us, ‘You have to read the Wall Street Journal every day.’ Professors made economics so interesting for me that I wanted to get into it. For an 18-year-old, getting exposed to all of these areas, it made me want to see more. It didn’t matter the class size—we had great case studies to work with, we had great lectures, and we had debates and discussions that I still remember.

How did you reconnect with CSUN?
My sister’s foundation had a meeting with the former chancellor of Cal State’s trustees. She knew my interest was high and she knew they needed help to get to the next level, so she connected us.

I understand your name will now be on a building—
It’s not about the building, it’s about the education. The money I’m donating will go into helping four areas: entrepreneurial activities; professional development and career success; increasing the diversity in our workforce (women and minorities); and global awareness within the student body.

How will these areas of focus affect the current curriculum at CSUN?
That’s a good question. Our focus is on adding to the current curriculum. I want to bring in more professors, bring in speakers from the private and public sectors, establish partnerships with sister schools, offer travel abroad programs, and create systems (using technology and partnerships) that will establish a workforce for the future.