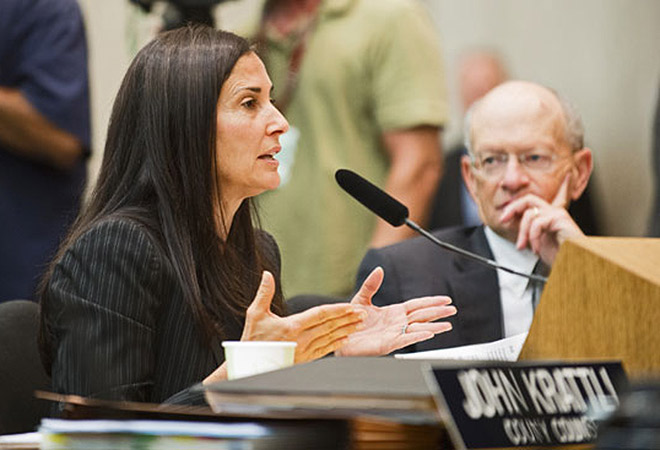 Last June, the L.A. County Board of Supervisors sanctioned the creation of the Blue Ribbon Commission, which was asked to investigate why child protection reforms at the Department of Children and Family Services had not been implemented. In April, the panel, comprised of 13 experts, released a comprehensive report on the current state of child care in L.A., which included information that had been compiled through extensive research over the course of six months. Here, Third District Commission member Leslie Gilbert-Lurie reveals the panel’s methods, struggles, hopes, and ultimate goals for an unprecedented makeover of the city’s child protection system.

Explain what the Blue Ribbon Commission is and how it works.
The Blue Ribbon Commission on Child Protection was implemented eight months ago in response to the death of Gabriel Hernandez, an eight-year-old in Palmdale who was murdered by his mother and her boyfriend. His death, and those of other children who fall through the cracks, really highlighted the ineffectiveness of the law in L.A. County’s child protection system. And so, each county supervisor appointed two commissioners to our ten-person team, and we were given the task of having six months to hold hearings, do as much research as possible, and produce a report with recommendations to improve the system.

How long have you been connected to this cause?
I’ve always been interested in the rights of children. I began my career as a lawyer and then I was an executive at NBC, but when I left NBC I wanted to get involved in the county. I found myself getting involved in issues related to human rights and children, and the Alliance for Children’s Rights was obviously a perfect fit for me. I look for causes that I could make a unique contribution to, somewhere that has big problems that need to be fixed. And this seemed like one that needed immediate attention.

When it came to conducting your research, what kind of steps did you take?
We held a series of hearings where we tried to hear from all of the most relevant agencies, community members and players who could shed light on the current problems and offer solutions. We heard from the Department of Children and Family Service the Department of Mental Health, the Department of Public Health, the Office of Education, community groups, the Alliance for Children’s Rights, the law enforcement entities. We tried to get a lot of forensic information in an effort to get a sense of what went wrong. But we also tried to focus on helping children in the foster care system by focusing our efforts on prevention and the accuracy of assessments that take place. There were a lot of shocking findings.

There was a real call for immediacy throughout the report. As you were compiling information, which issues solicited swift action?
I was struck by the fact that in our months of hearings, no individual appeared before us and testified that the system worked well the way it is. Every social worker seemed to feel stretched and overworked; judges said that their caseloads were way too high to make the best decisions possible. It seemed everyone knew they were a part of a broken system, but there wasn’t one individual in charge of the whole system who could fix it.

We were surprised to hear that infants, sometimes under one week old, sit on the desk of social workers during the day while social workers search for a home, or that many children who are foster homes are three years of learning behind their class when they reach high school, or that relatives who are caregivers — who seemed to make children feel the most protected and stable—are funded so much less than non-relative caregivers for no logical reason. But mostly I think we were surprised just to see that there was no sense of urgency really on the part of any agency or group when children are dying on our watch.

Was this the first example of an organization evaluating these processes?
A lot of advocacy groups have made their own recommendations in the past, but as far as we know this was the most comprehensive report and set of recommendations and that’s what we’ve heard from child advocates too.

In the past, money for reforms like those suggested in your report has been scarce—at least, according to higher authorities.
We did get the sense that county agencies in general look at proposals in terms of incremental cost. I think any time there’s a good idea, the thought is, ‘How much more is that going to cost?’ To me, if these proposals will change lives and keep children safer, how could that money not be there?

That being said, we tried to keep our suggestions within the realm of reality. We’re not recommending that a social worker be hired to every child or that foster parents be paid outrageous sums of money to take care of children, but we believe our proposals are not only doable, but in the long run, they will save the county money.

How would you describe your plan of action? Is there a timeline you have in mind?
Everything starts on May 20th, when our report goes to be approved, but we’d like to get started as soon as possible. We look at every day that is delayed as a day that lives could be saved but aren’t. We know that some financial analysis needs to take place, but we are proposing that the supervisors institute one office, one over-arching entity that would oversee the well-being of a child, and it would set over-arching goals in terms of lessening incidents of abuse, neglect and prevention as well as assessing the well-being of children within the welfare system so that there could be more stability. We want this office to spearhead a strategic plan for children and to direct money across agencies. Right now, no individual has that ability, so if a child dies or there’s failure in the system, everyone points their fingers at everyone else. We need to do what’s never been done before, and we believe that could start from day one.

Are there foreseeable problems with getting all the different departments to act as one?
I actually don’t think so. If well-intended people in each agency have a higher entity they have to report to, one who was asking them to work collaboratively under a shared strategic plan, they would be willing to do that. I really believe people take these jobs because they want to do good, but without clear direction or focus on the children, they become the least audible voice. There are always adults who are pulling for mental health dollars, or for public health dollars, but these children don’t really have anyone pulling for them. It would be a relief to give these agencies that kind of direction, and to be given the freedom to use their dollars on these children. People want, I think, a clear plan that we all buy into and that makes sense.

Are there similar organizations like Blue Ribbon all over the country, or are we one-of-a-kind?
I don’t think Blue Ribbon Commissions are all over the country by any means, but I would imagine that good leaders all over the country have come into office and wanted a strong team of educated but interested experts or community members to come together and give their recommendations. None of us expect the supervisors to implement every word of our report. We suggested a very innovative and sound structure, and in implementing many of these recommendations, it will create a process for continual reform and enhancement. And I imagine that’s what’s been done in some of the places in where they had the best results for child safety, like Florida and Philadelphia.

Now that the report has been established, what will your day-to-day involvement on the committee look like?
Personally, I do a variety of things. I just became co-chair of the Southern California Committee of Human Rights Watch, so I will be very involved there. And I am a founding member of the Alliance for Children’s Rights. I lecture all over about the Holocaust as well, so I’m sort of involved all over. But I think for the next few months, I plan to stick around and be as helpful as possible in implementing the Blue Ribbon Commission reform.