Home Uncategorized Put on Your Patient Pants: President Obama is Coming Back to Town 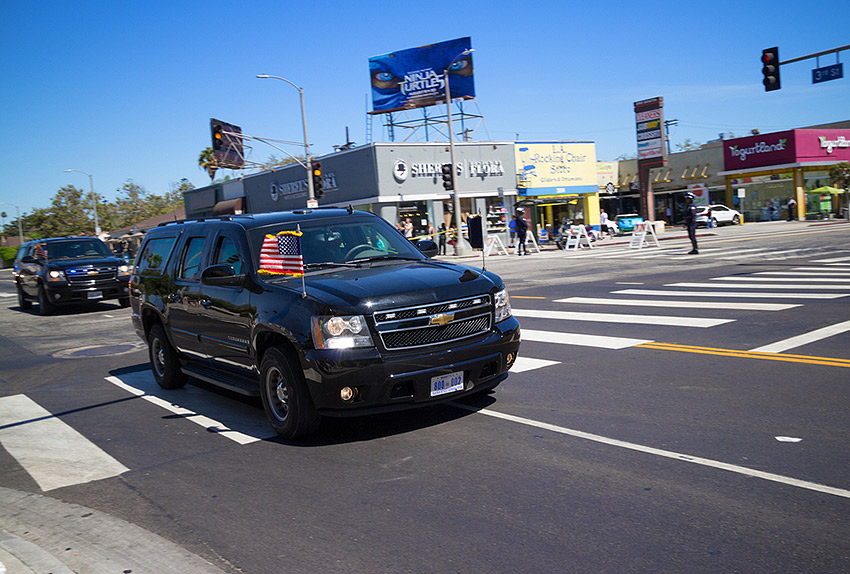 Traffic Update: As was to be expected based on several events in the president’s schedule, the LAPD has advised Angelenos to steer clear of certain streets on the westside. And, as many of you have likely already discovered, there is a hard closure along Hilgard Avenue between Le Conte Avenue and Weyburn Avenue which began today at 8:00 a.m. and will persist until Friday at 6 p.m. Here is a listing of the other areas that will be hit hardest by Obama’s visit today and tomorrow. God speed.

Some bus service would also be impacted, as the Metro Bus Orange Line route 302/2 on Hilgard Ave between Le Conte Ave and Weyburn Ave would be cancelled from 11 a.m. Thursday through 4 p.m. Friday, a news release from LAPD stated.

Vice president Joe Biden was in L.A. for two days earlier this week to attend fundraisers ahead of next month’s midterm elections, and like Obama before him, his arrival made various commutes miserable. But if you thought Bidenjam was bad, start practicing your Pranayama breathing techniques because it’s about to get much worse: Obama is coming back to town.

While a full list of road closures has yet to be released, we do know that the president is scheduled to arrive at LAX tomorrow, Thursday, at 2p.m. for a three-day string of fundraising events, including one at Cross Campus in Santa Monica and a pricey dinner (we’re talking $32,000 per plate) hosted by Her Royal Goopiness, miss Gwenyth Paltrow. In a sort of strange turn of events associated with the dinner, posters of Paltrow have popped up in and around Brentwood labeling her an “Obama Drone;” a preemptive strike, if you will, spearheaded by a seemingly conservative street artist who goes by Sabo.

Check back here for updates regarding the areas of the city that will be hit hardest by the Mr. Obama’s forthcoming visit. In the interim, enjoy a video from last night’s Jimmy Kimmel Live! telecast in which Angelenos try to answer an all-important question: Who is Joe Biden?