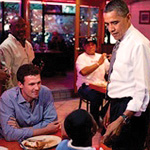 I volunteer four times a month. I’ve been involved with the Fulfillment Fund Leadership Council for four years, and I’ve been mentoring a 14-year-old, Jason, for two. I see Jason three times a month, and when possible once a week.

I volunteer with close to 50 people with the Leadership Council. We have different events to raise awareness with young people in the city, hoping they will become mentors. Young people, as mentors, keep the Fulfillment Fund fresh.

I volunteered because a couple of friends were involved, and they were trying to round out this Leadership Council with different kinds of people. Right away I became super interested. David Kanuth and his mentee, Jason, run into President Obama at Roscoe’s Chicken and Waffles. “What a great day,” says Kanuth of the photo. “Everyone’s hanging on Lil’ J’s words, including the President and congresswoman!”

I spend my volunteer time hanging out with Jason. The Fulfillment Fund does a really good job of matching [mentors and mentees]. They have an orientation and an individual interview, and then they try to match people up as best they can. The day I met Jason, he was 12. There was a piece of paper with questions [for me to ask] as a kind of crutch, but having something to talk about was never an issue.

Jason and I ran into President Obama at Roscoe’s Chicken and Waffles (right) right when we were getting to know each other, so I felt like the bar was set pretty high. At first, I tried to be creative with hockey games and outings like that. It took a little while to realize the frequency and stability that are important. Now that we know each other, it’s better to grab a bite to eat or go on hikes.

To volunteer I give up nothing. Obviously, I give some of my time, but I wouldn’t say I’ve given it up.

In return I’ve gained a great friend in Jason. I grew up in Columbus, Ohio and he grew up in downtown L.A., and whenever you put two people different backgrounds together you learn a lot.

From one volunteer to another, my advice is DO IT. That’s all I can say. If someone is eating an ice cream cone, they don’t need anyone to tell them how to enjoy it.