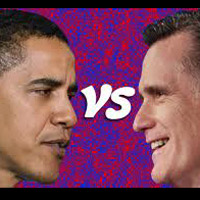 Presidential Debates: Round One – Obama vs. Romney – Presidency on the Line
When: 5:45 – 8 p.m.
Where: The Crawford Family Forum, 474 South Raymond Avenue, Pasadena
What: 89.3 KPCC’s Frank Stoltze will watch the debate live with Raphael Sonenshein, executive director of The Pat Brown Institute, and KPCC listeners. The event already reached capacity, but the station has set up a waitlist for latecomers. More information.

Debate Watch Party
When: 4 p.m.
Where: La Poubelle Bistro, 5907 Franklin Ave., Hollywood
What: The French café is inviting regulars and first-time patrons alike to watch the debate over diner.

2012 Presidential Debate Viewing Party at The Association
When: 6 -8 p.m.
Where: 110 E. 6th Street, Los Angeles
What: Whether your candidate flubs or fares well “Presidential cocktail specials” will be within reach. More information.

Barack the Kodak
When: 5 p.m
Where: Pig n Whistle, 6714 Hollywood Blvd., Los Angeles
What: This event, organized by “43” supporters, kicks off with a rally outside the Kodak Theater. More information.

Eso Won Books’ Special Debate Viewing Party
When: 5:30 p.m.
Where: Eso Won Books, 4327 Degnan Blvd., Los Angeles
What: Dr. Anthony Samad of the Urban Issues Breakfast Forum plays host at this word-of-mouth event that will conclude with a discussion after the big show.