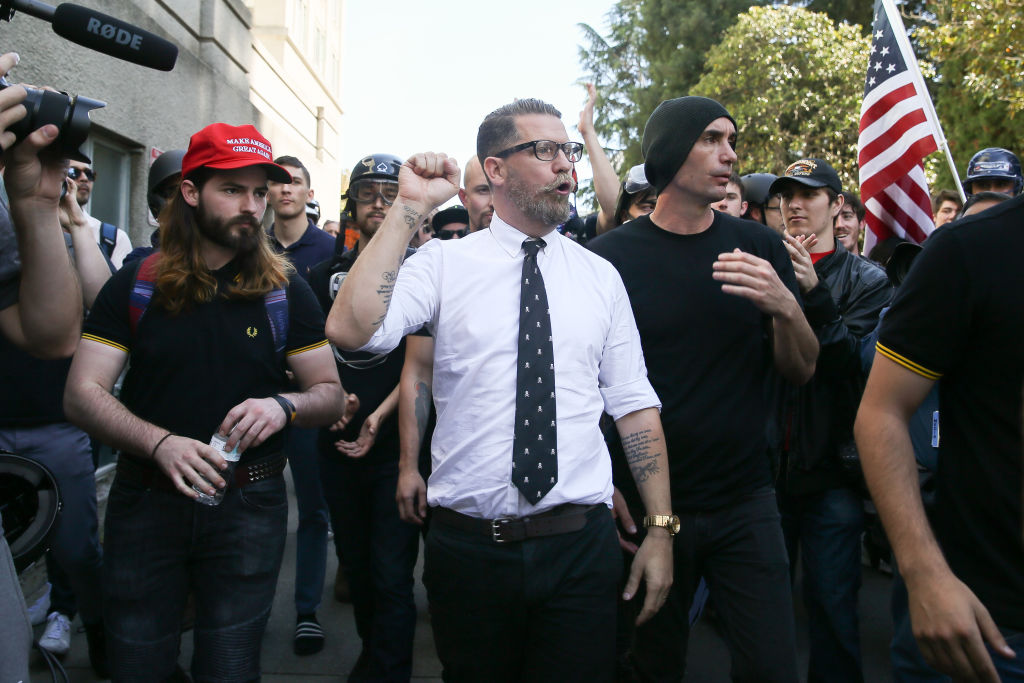 On Saturday night, a group of men identified as members of the right-wing Proud Boys organization gathered at the Atwater Village bar the Griffin. They were met with pushback from members of several local community organizations who rallied to protest the meeting, ultimately resulting in the bar closing. The Griffin is set to reopen tonight, with what they say will be a stricter policy about allowing individuals associated with hate groups to enter.

The Proud Boys were launched in 2016 by Canadian right-wing activist and VICE co-founder Gavin McInnes. As reported in the Wisconsin Gazette after an altercation between Proud Boys members and local residents turned violent outside a Madison bar, the group’s organizers assert that the Proud Boys are not associated with alt-right or racist ideologies, rather self-identifying as a fraternal organization of “Western chauvinists.”

That claim is contradicted by the Southern Poverty Law Center, which designates the Proud Boys as a hate group, and maintains an extensive chronicle of Islamophobic, anti-Semitic, transphobic, anti-immigrant, racist, and misogynistic statements by McInnes and his associates. A former member of the group was a key organizer for the Unite the Right rally in Charlottesville, Virginia, though the Proud Boys officially state they have distanced themselves from him.

According to the Southern Poverty Law Center, McInnes himself has said that a meeting of Proud Boys at a local bar or pub would “usually consist of drinking, fighting, and reading aloud from Pat Buchanan’s Death of the West.” It is believed that there are about 6,000 active members of the group. When they assemble, they’re typically observed wearing matching black polo shirts with yellow trim, often with red Make America Great Again caps.

It may have been the visibility of the uniforms which alerted other bar-goers to the Proud Boys’ affiliation on Saturday night. Around 11 P.M., Josh Androsky, an organizer involved with the Los Angeles Democratic Socialists of America, posted to Twitter that about 20 Proud Boys members had gathered at The Griffin. A small number of protesters from the DSA and the community coalition Defend North East Los Angeles showed up at the bar, aware that Proud Boys gatherings often lead to provocations and violent skirmishes.

Androsky reports that of the Proud Boys members shoved his girlfriend after being verbally confronted by the protestors. After that, things seem to have escalated. Defend North East Los Angeles protesters captured video from the scene, which was later shared by L.A. Taco.

The Griffin eventually ejected the Proud Boys, the bar closed, and police were called to the scene. The bar stayed closed on Sunday, posting a statement on Facebook and Instagram about the incident, in which they contend allowing the Proud Boys to be served as customers rather than confronted by staff was actually a tactic intended to diffuse the situation.

One witness posted video indicating that, after Griffin was shut down, he and his group were harassed on the street outside by the lingering Proud Boys. A Twitter post from @WalrusMaster reported that the Proud Boys later attempted to regroup at nearby Bigfoot Lodge, but were turned away.

According to a second online statement, the bar plans to reopen Monday night, with new signage at the entrances about inclusiveness and a commitment by staff to attempt to screen out anyone associated with hate groups of any kind. That may not be enough to appease online commenters who have been flooding the bar’s social media and Yelp pages with calls for a boycott following the incident. The calls for boycotting of the bar come from both sides—progressive activists are angry that the bar allowed the gathering and hesitated to break it up quickly; right-wing activists sympathetic to the Proud Boys are angry at what they perceive as an intolerance toward their political viewpoint.

This was not the first time that the Proud Boys have been spotted meeting at a bar around L.A. of late. Last month, the group met at the new Chinatown outpost of Highland Park Brewing.