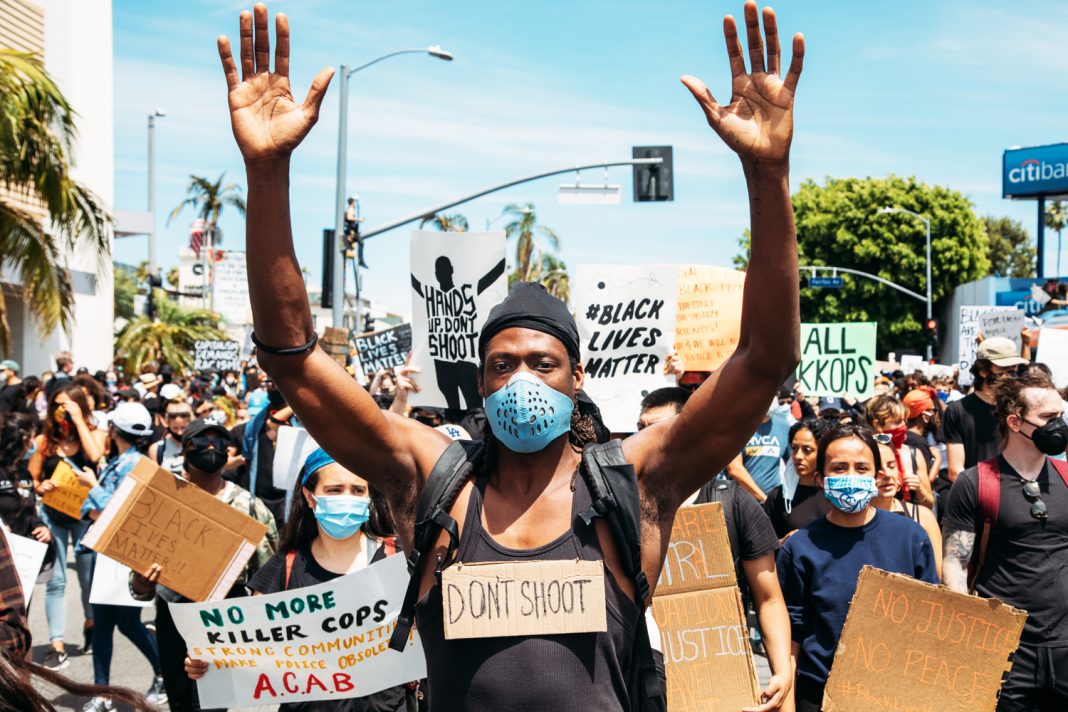 “While peace is always desirable, it felt good to see the anger, frustration, and rage”

Attending the Fairfax District Black Lives Matter protest on May 30 created a powerful mix of emotions for me. It was infuriating to be there, knowing multiple names (George Floyd, Breonna Taylor, Tony McDade) had been added to the never-ending list of Black people killed by the police in the week prior. Yet, it was empowering to see the sheer number of peaceful and not-so-peaceful protestors who came out to be seen, heard, and felt. While peace is always desirable, it felt good to see the anger, frustration, and rage. It felt good to see people fed up with systemic racism and police violence against Black people. The combination of angry and hopeful emotions is what made this moment feel it could possibly be a step towards real change. —Rob Liggins

I am not okay. The cruelty I’ve witnessed by the police at protests here in Los Angeles and in cities around the country will stay with me forever. I don’t think I’ll ever be able to thoroughly articulate the rage and the sorrow that is weighing on me.

I’ve watched non-Black individuals vandalize and loot with zero police presence meanwhile every law enforcement official in the city is in riot gear shooting at unarmed, peaceful protestors two blocks away. People kneeling on the ground being gassed and shot at haunts me. Federal agencies have been granted sweeping powers of covert surveillance and local police forces are searching social media for images of individual protestors. [It is for this reason all faces have been blurred in Hunley’s photos]. Corporations, influencers, and non-Black people’s performative allyship floods my timeline daily.

On day one of the protests, on our way back from blocking the freeway Kendrick Sampson, BLM, and BLD PWR stopped in front of the Metropolitan Detention Center to speak to the crowd. It was at that moment we could hear a loud banging coming from the cells that held detainees. They were banging on the windows in unison. They wanted freedom. It was so haunting.

They are not OK.

The love I have for my family, my community, and every Black person who has suffered at the hands of white supremacist patriarchal capitalism is what keeps me from unraveling.

I am not OK, but I know that one day we will be. —Alexis Hunley

“We moved swiftly through the streets, protecting and directing one another, chanting ‘Black Lives Matter'”

“Protect and serve,” that is what I have been coaxed into believing the police were supposed to represent. I arrived at the Downtown Los Angeles protest late on May 29, and the march had already begun. When I arrived at the police line on Hope Street. I could see the protesters on 5th being infiltrated by police forces, and at the police line protesters attempting to leave the protest area were knocked down to the ground with knife sticks. I was told by one of the officers when I crossed their line, “If you go down there don’t come back this way!” I was not planning to. I marched peacefully with maybe 200-plus people. We moved swiftly through the streets, protecting and directing one another, chanting “Black Lives Matter” and George Floyd’s name, traffic stopped and honked in support, all while LAPD consistently tried boxing us in and cutting off every means of escape. —India Hicks

“The sense of community, compassion and call for change was palpable”

Thousands marched through the streets of Hollywood in Los Angeles on June 2, protesting the killings of George Floyd, Breonna Taylor, Tony McDade, Ahmaud Arbery, and countless other black lives lost to police violence. The sense of community, compassion and call for change was palpable. Protestors passed out waters, masks, snacks, and hand sanitizers in the crowd and along the march route. Several protestors discovered a man laying unconscious on the sidewalk in the sun and collectively moved him to the shade, leaving water bottles in his hands. Other protestors signified their ability to provide First Aid care by displaying a paramedic emblem.

As hundreds streamed onto Sunset Boulevard, taking over the street in what appeared to be an impromptu march, many vehicles just joined the procession honking their support and leaning out of cars to raise the black power fist in solidarity. While the police and National Guard closed off intersections throughout Hollywood, keeping protests contained in certain areas, waves of people continued to find each other and swell in numbers.  —Tara Pixley