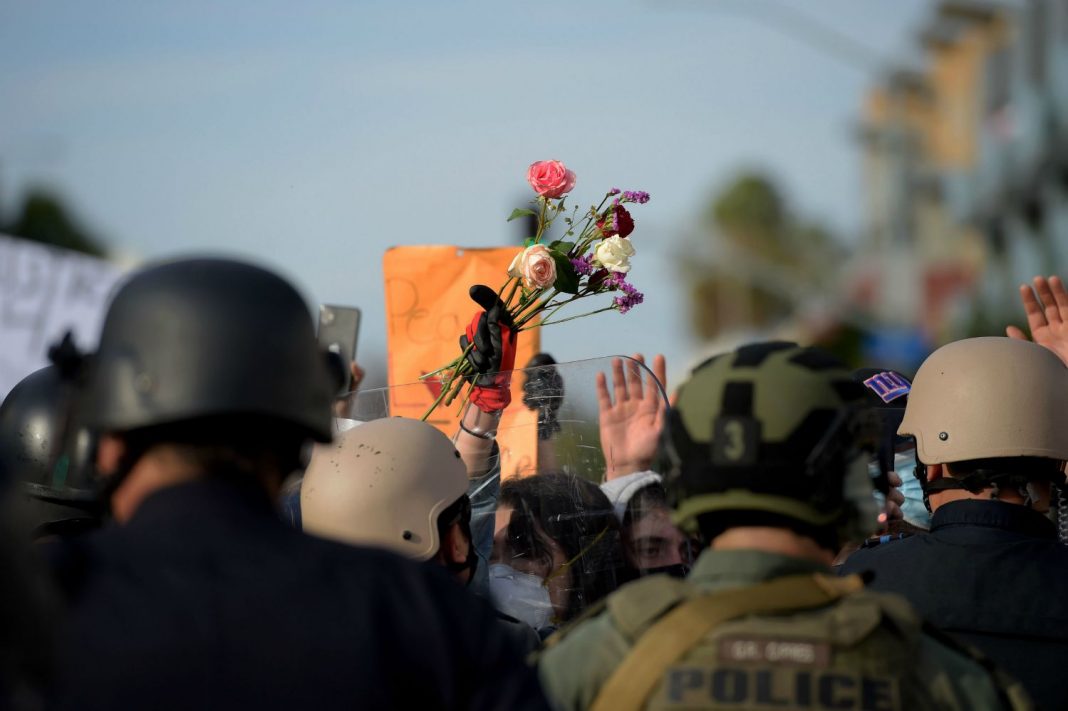 Around 150 protesters met at the corner of Ocean and Montana in Santa Monica Sunday at noon to decry the murder of George Floyd in Minneapolis and law enforcement’s history of violence against black people. In front of Palisades Park and the beachfront—just recently reopened to the public after the two-month stay-at-home order—the mostly young crowd carried signs that read “I can’t breathe” and “Black Lives Matter.” Drivers honked their horns in support as they passed by, and locals on foot gave protesters a thumbs up.

That group eventually made its way to Santa Monica Pier, as a different scene developed at Santa Monica Place, where looters entered stores and made off with sporting goods, clothes, and other items. Three police officers stood guard at entrance to the Third Street Promenade at Wilshire Boulevard and Third Street, and no pedestrians or potential shoppers were allowed to pass through, except for people picking up food at a nearby Chipotle, where they were watched by another police officer. The mall had just opened for business again the day before, on Saturday, May 30.

As the day wore on, the looting spread. Upscale second-hand designer store Wasteland, between Santa Monica Boulevard and Arizona, which had been boarded up with a mural that read “After the Plague Comes the Renaissance,” had its doors beaten down, and hundreds of looters were observed live on MSNBC grabbing as many designer and vintage goods as they could. Observers stood by, taking video of the surreal scene on their iPhones.

REI sporting goods on the corner of Santa Monica Boulevard and 4th had its windows and doors smashed in, and looters were seen leaving with bicycles, skateboards, and surfboards. Retail owners who hadn’t yet been hit were outside stores, boarding them up as quickly as possible.

Early in the day, police didn’t seem particularly eager to engage with looters, and there appeared to be little violence. But some in L.A. have criticized a lack of police response to commercial property damage. Aaron Landy, a resident of the Fairfax neighborhood, which was affected by looting on Saturday night, told the Los Angeles Times that he recalled wondering, “Where are the police? They’re nowhere. There’s not a policeman in sight. It’s just like a free-for-all. It was just shocking. I was outraged.”

Mayor Eric Garcetti has also chimed in to admonish people who engaged in “destruction and looting,” saying, “They have not just caused chaos and damage. They are hijacking a moment and a movement.”

Despite the focus on destruction of commercial property, much of the protesting that’s taken place since last week in Los Angeles has been peaceful. On Saturday, Black Lives Matter held an hours-long rally in Pan Pacific Park without incident, and a peaceful procession of protesters subsequently made its way across large swaths of the city. The deployment of large numbers of police officers and civilian National Guard soldiers has ramped up tensions in areas where demonstrations are taking place, as was the case in Fairfax on Saturday.

On Sunday, Santa Monica imposed a curfew for 4 p.m. to last through 5:30 a.m. Monday. As of 6 a.m., helicopters could still be heard hovering above the city and National Guard troops are standing vigil outside stores. According to Santa Monica PD, 400 people were ultimately arrested, most of them from outside the city.

RELATED: Inside Saturday’s Protests, from Pan-Pacific Park to Beverly Hills