Home Activism Protesters on Why They March: ‘Black People Need to Get Our Voices... 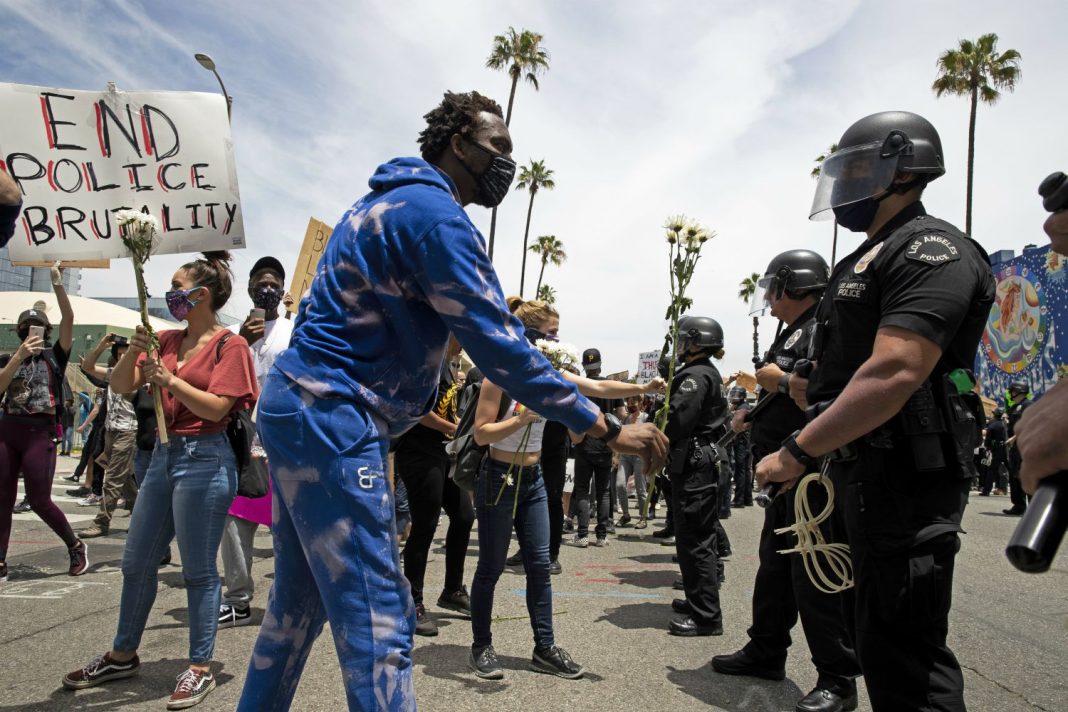 On Monday night, rapper YG informed his 6.8 million Instagram followers and 3.3 million Twitter followers that he was organizing a protest at Hollywood and Vine on Tuesday at noon. “LA – meet me on Hollywood Blvd & Vine tomorrow,” the Instagram story post began. “We on all positive vibes tomorrow,” he added in a second story post. “NO LOOTING.”

YG’s call to action follows over a week of protests in Los Angeles and across the country and Americans demanding justice for the death of George Floyd, an unarmed black man who was killed by Minneapolis police.

Then, late on Tuesday morning, roughly an hour before YG’s protest was scheduled to begin, he called it off. “I was told today that my protest is not safe and people getting hurt or shot,” he said in a Twitter video. “I’m not trying to get none of my people hurt and shot, so I’m going to cancel the date.”

Despite YG’s cancelation, about 75 to 100 people had gathered in the middle of the intersection at Hollywood and Vine by 11:30 a.m.

“I just got tired of watching everything on TV,” John Henderson, one of the protestors already at the scene, began. “I wanted to come out and show my support. It’s better than being behind a screen, behind a phone.” Today’s protest was Henderson’s first. “My generation, this is the first thing I’ve ever seen like this,” he continued. “I’m proud of everybody coming together.”

“We’re peacefully protesting, that’s all we’ve been doing since the start,” Kyron Shank, from Indianapolis, said. Yesterday’s protest was the second he’d attended this week. “All we’re asking is just to exercise our right to speak, our right to make a change for ourselves. Period.”

Nick Bryant, who had been driving with his young daughter, saw the protestors at Hollywood and Vine and decided to join. “All this positivity is happening right in front of us,” Bryant said while his daughter sat on his shoulders watching. “History is happening right here. People who are non-melanated write the history books. We have to rewrite the history books. We have to show our children visually what’s happening.” Bryant added that he had been at another protest earlier in the week. “This is what we need to show, not all that bullshit on TV. This is the peaceful stuff that we need to show.”

By 11:50 a.m., police were still clear of the scene, and the group of protestors began marching west down the middle of Hollywood Boulevard. Behind them, a group of cars was acting as a sort of protective barricade—honking in support and holding signs of their own.

Eleanor, who lives in downtown Los Angeles, was one of the people forming a barricade with her car. “I just came from the Venice [protest], and they told everyone about this one,” she began, explaining that she was part of the mass arrest that happened during a protest in downtown Los Angeles on Friday night, but was continuing to show up to advocate for change. “The whole reason we’re all coming out here is for change,” Eleanor continued. She added her concern that people at home were just seeing “the looters, and they see everything else that the media is showing them. And they’re not getting it. That’s not going to help at all.”

By noon, the march had grown to over 200 people with a steady stream of more protestors continuing to arrive. The LAPD had also arrived, and they halted the march at Hollywood and Las Palmas. The group surrounded the police and chanted various slogans.

Paige and Taylor, two women from Minneapolis who had recently moved to Los Angeles, were among the crowd on Hollywood Boulevard. “When this riot happened in Minneapolis, we were very devastated,” Taylor said. “These are our neighborhoods. So, we’re making a change with our voices. Black people need to get our voices heard today. Not tomorrow. Today.”

“We need a new system for everyone,” Paige added. “Fuck this system. Doesn’t matter where you are in the world, you can still make justice.”

Less than a block from the intersection, Stephanie watched the protest unfold from her vintage store, Enon. “I was aware of the protest that was going to happen down at Hollywood and Vine, and I came today to check on the store and put our support signs up,” she began. “If we get looted, we get looted,” she conceded. “There’s nothing more precious than justice and standing for lives. So, if it happens, it happens. But we just want to show our support through our window and be a safe zone if we have to. Just be a part of the community.”

For Melanie MacQueen and her husband, John Leslie, the protests in Los Angeles and across the country today are reminiscent of those in 1992. At the time, they volunteered with a children’s organization and worked to ensure such events never happened again. “And here it is, it’s still going on. We’re talking something like 30 years later, and it’s gotta stop.” Unlike most of the protestors gathered on Hollywood Boulevard who learned about the protest through social media, MacQueen and Leslie, both in their 60s, found out about it through KTLA on their TV. Citing her age, MacQueen further noted her concern that “COVID-19 is out there and we’re standing awfully close to a lot of people.”

Around 12:30 pm, additional police had shown up, and much of the crowd (now nearing a thousand people) had begun marching back east towards Vine. A smaller group stayed behind on Hudson to listen to Darius Devine speak with a megaphone, his back directly up against the police line. Devine spoke passionately to the crowd about making their voices heard and maintaining their safety in the face of the police. Afterward, Devine spoke with Los Angeles. “What happened over by Whitley and Fairfax on Saturday, that was not us,” he began. “We have always stood for peace and we’re always going to remain peaceful.” Devine said that all the military force present made him feel unsafe. “They brought the war to us,” he continued of the LAPD. “We have lost too many people. We just want the police force to treat us like human beings. We want them to do their jobs a little bit better. That’s all we’re asking for. Treat us like human beings. Not like we’re dogs.”

As the protestors marched down Hollywood, their numbers continued to grow, as did the police presence. By 1 p.m., the temperature was pushing 80 degrees, and National Guard troops were stationed along Sunset Boulevard in front of the ArcLight theater. Having turned down Bronson and then west onto Sunset Boulevard, the marchers had now come face to face with a line of troops in full combat gear and carrying M16 rifles. A water bottle was thrown from the crowd at the troops, but the protestors remained calm. At one point, the crowd called for the troops to take a knee. Two National Guardsmen did, and the crowd cheered. But with the protestors standing in place, a column of LAPD officers and patrol cars moved in on them from behind. Looking to diffuse the situation, members of the protest began filing people south along Vine Street. “Keep moving!” they called to the crowd.

“I just see [police] running and they had their batons out and they were rushing towards people,” a member of the crowd who only identified himself as John Doe said. “They’re starting to escalate.” Asked if he witnessed anyone provoking the police, Doe responded, “No, they were peacefully protesting. I think the police are getting a little antsy.”

The crowd was splintering by 1:30 p.m. The bulk of the marchers, easily more than a thousand people, were back up on Hollywood Boulevard heading east. A new barricade of cars joined to provide a buffer. Jenny Taylor Santiago spoke from the driver’s seat of her car and said she wanted to use her “white privilege to help people of color—especially black Americans.” She protested on Monday in Van Nuys, and said that while she felt safe today along Hollywood Boulevard, “they have the National Guard over there [on Sunset]. There’s no protesters and they’re standing there with guns, waiting. Not rubber bullet guns, but actual guns.”

Around 2:10 p.m., YG had posted to his Instagram about the National Guard’s presence. “Do not give them an excuse to create a news story that hurts the movement,” he said.

Here is the police response to an entirely peaceful protest today in Los Angeles that @joshjamesxxx was at. pic.twitter.com/8snaDV8oWK

The day remained overwhelmingly peaceful and without major incident. A little before 3 p.m., reports emerged of the LAPD firing rubber bullets and throwing tear gas at the crowds. “It was calm and silent, then just scream,” Rebecca Roland said of the incident along Ivar. Roland stated she was unsure what caused the altercation, but that the march at the time “was completely peaceful.”

At 6 p.m., the countywide curfew was in place, but protests continued throughout the city, from the Getty House in Windsor Square, home of Mayor Eric Garcetti, to downtown.

RELATED: Thousands of Peaceful Protesters March Through Hollywood and DTLA