Home Politics Protect and Organize: How a Local Civil Rights Non-Profit is Preparing for... 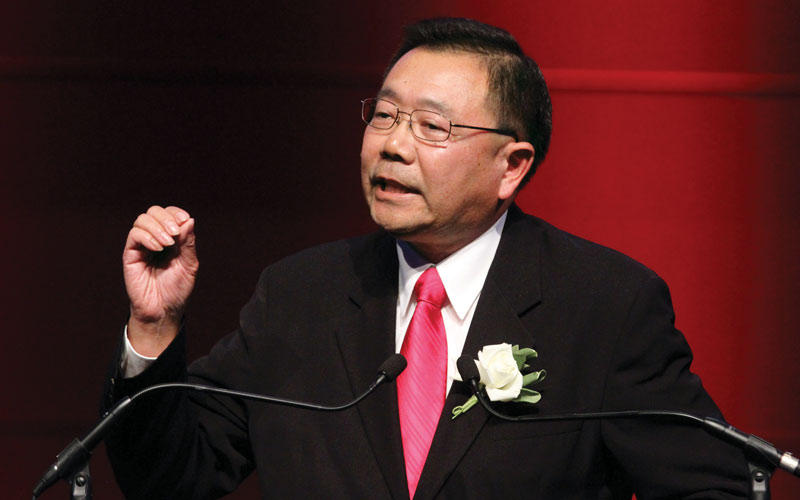 In the late 1970s, Stewart Kwoh was at a restaurant in North Carolina when a white waitress asked him where his family was from. Before he could finish explaining that his great-grandfather was a miner in New Mexico and his grandfather was a tailor turned herbalist from Oakland, she asked him, “And how do you like your new country?” For Kwoh, who’s president of the civil rights group Advancing Justice-LA, the story exemplifies the “perpetual foreigner” stereotype that many Asian Americans still wrestle with. “It always reminds me that my two sons, who were born at Kaiser Sunset, will be asked the same question during their lives,” he says. “We have to move forward and make sure that the stereotypes diminish.” Kwoh has devoted himself to advocating for Asian Americans ever since he started a community law practice after graduating from UCLA’s law school. Today the MacArthur “Genius” grant winner oversees a team of more than 100 that provides legal services for low-income residents, litigates high-profile cases, and performs education and leadership development work. Here’s a peek at what’s on his radar:

Never underestimating the power of stereotypes: I remember when Matt Fong was alive and running for U.S. Senate in 1998. Here’s a guy who was born here, was a lieutenant colonel in the Air Force Reserve, and some reporter, who should have known better, said, “You were born here, but if China and the U.S. get into a conflict, which side will you take?” And so I think this foreigner image is also a loyalty question. Obviously Japanese Americans took the brunt of that during World War II when 120,000 people were incarcerated. So how do you deal with that? You constantly have to educate, you have to work with other people, you have to be in coalitions; if there’s a hate crime against somebody, you have to be there, too. We can’t solve things being isolated.

Fighting slave labor: We represented 11 Filipino bakery workers who were trafficked from the Philippines to work at a high-end bakery. They worked 15-hour days and got paid $2 an hour and were loaded with this $11,000 debt. Last summer we got a $15 million default judgment. Unfortunately it was default because the employers realized they would lose, so they closed their two shops and fled the country. We’re tracking them down, but the good news is that we were able to get all 11 workers trafficking visas so they can stay here for several years and work legally.

Preparing for a Trump presidency: We’re committed to protecting and organizing those with whom we’ve worked, including the youth who applied for Deferred Action for Childhood Arrivals. We probably helped over 7,000 students in the past few years through workshops and representation. We work with Muslim and South Asian groups a lot, so we need to make sure there isn’t a registry of some kind. We help a lot of permanent residents become U.S. citizens, and we want to make sure that they’re still able to apply. We’ve also helped to enroll thousands of Asian Americans and Pacific Islanders in Affordable Care Act plans, and we need to make sure that these folks continue to get health care.