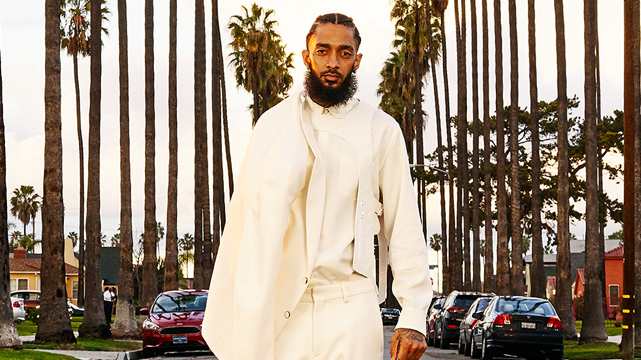 More than three years after beloved Los Angeles rapper Nipsey Hussle was gunned down outside of his Hyde Park store, Marathon Clothing, at the age of 33, the trial of his accused murderer began with a graphic opening statement in L.A. County Superior Court Wednesday.

L.A. County Deputy District Attorney John McKinney got right to the horrific details, telling jurors that on the morning of March 31, 2019 in a parking lot in Crenshaw, Hussle’s alleged killer, Eric Holder, now 33, shouted, “You are through!” at the rapper before firing 10 or 11 times, the New York Post reports.

Hussle was shot ten times and died of gunshots to the head and torso. Holder was captured on April 2 after an extensive manhunt.

Eric Holder is wanted for Homicide in the shooting of Nipsey Hussle. He was last seen in a 2016 white 4 door Chevy Cruze CA license plate 7RJD742. Anyone with information related to his whereabouts or this deadly shooting is urged to contact South Bureau Homicide at 323-786-5100 pic.twitter.com/3pX4fbezDs

“He shot from left and right hand, retreated, shot some more, retreated and went back in and shot even more,” McKinney said. “The only thing he said while looking at Nipsey… ‘You are through!’”

Hussle and Holder were both members of the Rollin 60s Crips set, and prosecutors say Holder shot Hussle because he believed that the rapper, who had earned a reputation as a philanthropist and all around pillar of the community, had accused him of being a police informant.

L.A. County Deputy Public Defender Aaron Jansen admitted during his opening statement that Holder—who is charged with one count of murder, two counts of attempted murder and one count of possessions of a firearm by felon—killed Hussle, but said that his client had been “overcharged” because the attack was a crime of passion, not premeditated murder, according the Los Angeles Times.

In a recent interview, McKinney would not address whether or not Holder was a snitch, but Jansen said that Hussle’s comment left the accused “so enraged and triggered” that he couldn’t stop himself from returning to the parking lot and opening fire with two handguns.

Herman Douglas, a former Rollin 60s member and longtime friend of Hussle’s who worked at Marathon Clothing, dismissed the idea that Holder would have been right to fear for his life if word had gotten out he was working with law enforcement, the Times reports.

“Nowadays there’s so many snitches walking around… that’s a myth,” Douglas said. “You could walk out a gang right now. We don’t care if you walk out of the Rollin 60s, we ain’t gonna do nothing to you.”

As KTLA reports, McKinney told jurors that Hussle “was shot, literally, from the bottom of his feet to the top of the head.”