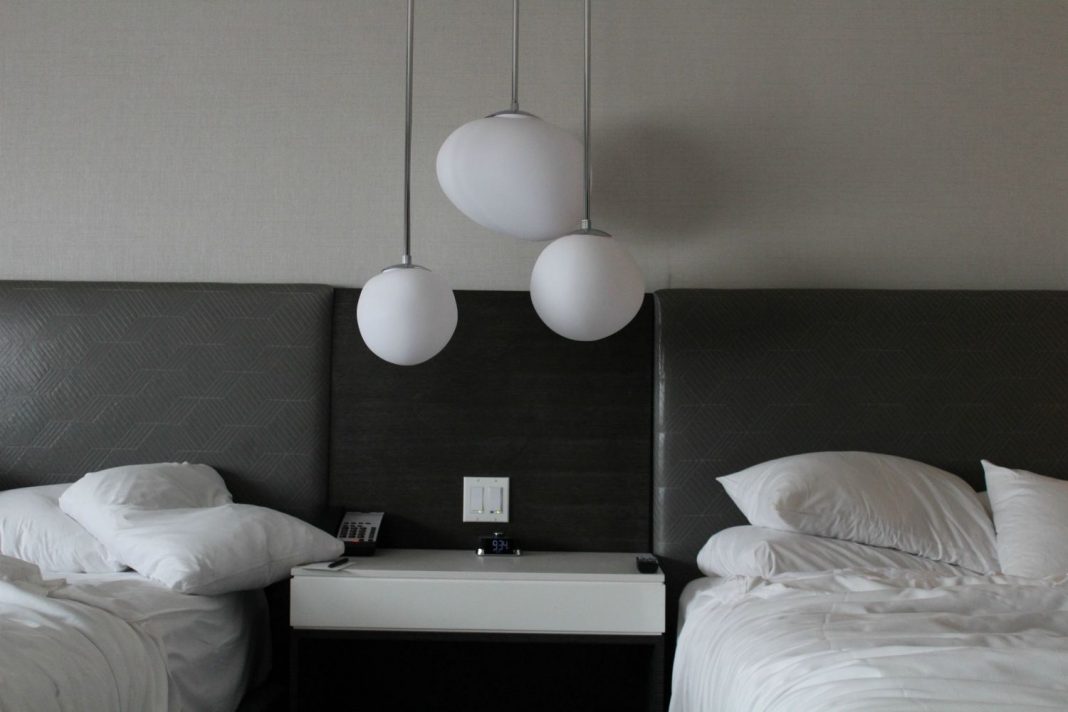 Last Friday, Davon Brown, an unhoused organizer who lives in Echo Park, walked into the Ritz-Carlton at L.A. Live and announced that he was looking to book a room. Dressed in sunglasses and a blazer, Brown told staffers he was a famous musician who needed a place to stay in the coming weeks and requested a tour. He was promptly escorted to a suite on the hotel’s 22nd floor. Once he got there, he revealed his true identity.

“I’m not famous,” said Brown, removing his sunglasses. “I’m homeless. I live in Echo Park. And I’m not leaving this hotel until Mayor Garcetti comes and takes hold of these vacancies.”

For more than six hours, Brown and two fellow activists occupied the room before they were arrested, cited for misdemeanor trespassing, and released. The activists say the protest, which was supported by members of activist organization Street Watch L.A., was meant to urge public officials to use more hotels and motels to house homeless individuals amid the COVID-19 pandemic.

“I had no choice,” Brown told Los Angeles during a phone call from the hotel room last Friday. “Mayor Garcetti said, ‘Stay home, because more people will die.’ But what about the homeless?”

@MayorOfLA refuses to commandeer vacant hotels to save lives, so today we are supporting our unhoused comrade Davon Brown who is commandeering a vacant hotel room for himself.

We’re not leaving until you commandeer vacant rooms for ALL unhoused Angelenos. #NoVacancyCA pic.twitter.com/pXZ3ispGwr

In early April, Governor Gavin Newsom launched Project Roomkey, an initiative to house homeless individuals in hotel and motel rooms across the state so they can shelter in place during the pandemic. In L.A. County, where approximately 60,000 people are living in cars or on the streets, local officials stated that their goal was to move about 15,000 people into rooms under the program, with a focus on sheltering elderly and vulnerable Angelenos first. Now, a month later, only a fraction of that number has been sheltered—according to the latest county data, just over 2,700 rooms have been leased for the program so far, with 1,582 currently occupied.

In recent weeks, housing advocates have criticized the program for its slow progress, demanding that local officials use their emergency powers to commandeer local hotels so they can move people into rooms faster. They’ve said the officials should place particular pressure on hotels like the ones at the L.A Live complex, which have received generous tax subsidies from the city.

“They’ve gotten millions and billions of dollars combined, both hotels are vacant, and they are a mile away from the epicenter of homelessness in L.A.,” says Street Watch L.A. organizer Jed Parriott, who occupied the room at the Ritz with Brown. “I absolutely feel like they should be opening their doors.”

According to a 2018 report from City Controller Ron Galperin, the 1,001-room J.W. Marriott and Ritz-Carlton L.A. Live complex was approved to receive $270 million in financial assistance from the city over 25 years in 2005. Just a few miles away, the 889-room InterContinental hotel was approved for at least $171 million in financial assistance over 25 years. Several other downtown hotels have received multimillion-dollar tax breaks over the past several decades, and many others have been built on public land.

Amid the COVID-19 pandemic, which has had a profoundly negative impact on the region’s tourism industry, a majority of hotel rooms in the region are currently vacant. According to data acquired by the Los Angeles Times, only 30 percent of hotels in the Los Angeles and Long Beach market were occupied as of late April.

Heather Rozman, executive director of the Hotel Association of Los Angeles, says that for some hotel operators, the opportunity to lease their buildings out for Project Roomkey has been a life raft. “I think it is a fantastic revenue opportunity for a hotelier to take advantage of revenue where there would usually be none,” she says.

However, Rozman says that solidifying contracts between hotels and the county has proved to be a bit more complicated. Though she says the organization received an “immediate and overwhelming response” from hotels interested in participating, many hoteliers have been hung up navigating liability and insurance issues as they consider entering into contracts. Many owners also still need to be educated on the details of how the program will work, and how wraparound services like healthcare and meal programs will be implemented.

“The fact is that we are trying to solve a 30-year chronic issue of homelessness in 30 days,” says Rozman. “This is a monumental effort.”

Other owners have reportedly expressed concerns about how the program will impact their reputation or image, as well as  property damage, despite that contracts require hotels be returned in their original condition. There has also been significant backlash from residents in suburban areas who live near hotels targeted for Project Roomkey. A representative from the Homeowner’s Association in the residential portion of the Ritz-Carlton at L.A. Live told the Associated Press residents oppose the use of the hotel to shelter homeless people because of “concerns about safety, security, property values, and overall lifestyle.”

Los Angeles City Councilmember Mike Bonin says trying to get answers about what’s really holding up the program has been “difficult and frustrating.” He is concerned that bias against the city’s homeless population could be a factor. If this is the case, says Bonin, it could be a “potential civil rights violation or a case of discrimination.”

“I have heard [hotel operators] say that corporate has issues or lawyers have issues or their shareholders have issues, and they need to have them review this,” he says. “My question is, if for any other reason the government was coming in and asking to lease a bunch of hotel rooms in a crisis—if it were an earthquake, if it were brushfire, or any form of natural disaster—would that level of review be happening?”

On Wednesday, Los Angeles City Council passed a motion co-authored by Bonin and Councilmember Marqueece Harris-Dawson asking the Los Angeles Homeless Services Authority for a report on why hotels that have been targeted for Project Roomkey are not participating. The report will focus in part on those hotels that have received public benefits. During the meeting, several council members expressed enthusiastic support for the request.

“The fact that we give public subsidies, public dollars, as an incentive for these hotels with these packages we approved of, would seem to me to be a complete justification that we expect something back, especially during an emergency, during a pandemic,” said Councilmember Mitch O’Farrell.

Bonin says he hopes the report will give the city a better idea of how to speed things up.

“We’ve asked for a list of which hotels that have gotten subsidies or benefits from the city are not stepping up, and why,” he said. “If it’s city bureaucracy, then cut the damn red tape. If it’s because these hotels have some other issue or they don’t want to do it, then we need to step up the pressure on them. And perhaps the Mayor or the Governor needs to use their executive authority in this crisis to commandeer [hotels].”

As L.A. begins the slow process of opening up again, Bonin says he is also pushing for the city to use federal funding to secure longer-term accommodations for the unhoused. This could happen through the rapid modular construction of new shelters, or by purchasing or leasing hotels and motels for longer periods of time. “Everybody wants to make sure we’re not turning folks back out on the street,” Bonin says.

Parriott says he’s glad Bonin’s motion passed, but he’s not thrilled at the idea of waiting around for another report to be released while vulnerable people are still living outdoors. He says the Mayor should commandeer the rooms immediately. “It looks good, but it’s late,” he says. “They should have had that motion a month ago. When are they actually going to get these rooms open?”

Meanwhile, Brown—who says he was deemed ineligible for the Project Roomkey program because he is not over 65 and doesn’t have any mental or physical ailments—has returned to Echo Park. He will continue to live in a tent for the time being.