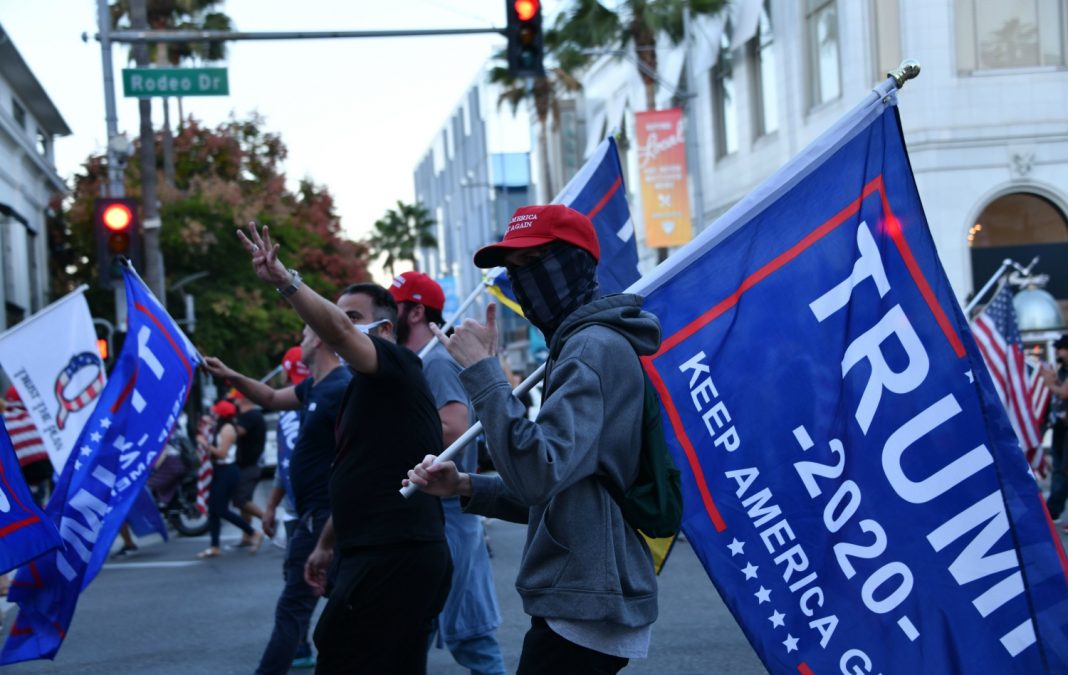 Pro-Trump protests have been escalating across the country as the nation hurtles toward Election Day. Over the weekend, the president’s loyalists surrounded Biden campaign vehicles in Texas forcing the cancelation of scheduled events, and blocked bridges and freeways in New York and New Jersey in what was believed to be an action designed to intimidate and inconvenience early voters. Just a few weeks ago, a right-wing terrorist cell attempted to kidnap and possibly assassinate a Democratic governor who has been critical of the White House. The president has remarked that the FBI should drop investigations into his supporters’ conduct.

Even in the majority-Democratic Los Angeles area, Trump’s most ardent supporters have made themselves as visible as possible.

On Sunday, a group of largely unmasked individuals carrying Trump and Blue Lives Matter flags marched through South Pasadena following a car caravan event. After the conclusion of the scheduled protest, Pasadena Now reports that police responded to a violent altercation between the Trump supporters and what a police statement described as an “opposing political group,” through no additional details were provided.

Car caravans, sometimes called “Trump Trains,” also took place over the weekend in the San Fernando Valley, and in Riverside County, where a caravan converged near an early voting center, according to the Los Angeles Times, making it difficult for voters to get to the polls.

Trump supporters from around the region have continued to amass in Beverly Hills, as they have regularly for months. Two different protests took place in the affluent enclave on Saturday, one of which was declared an unlawful assembly after a physical altercation between the gathered protesters and an individual who challenged them. Another Trump critic who approached the protesters told the Los Angeles Times that, “Some people get too close without a mask on; some have forcibly coughed at me.” There was no organized counter-protest staged at either of the Trump rally sites.

While the Beverly Hills protests have been generally nonviolent, business owners in the Trump rally hotspot have been observed boarding up their shops in advance of Election Day, and having employees stand guard outside luxury boutiques. Preparing in the event that political protests instigated by either side of the aisle escalate, the city will be bringing in a SWAT team from Ventura County to be on hand in the coming week, and will be entirely closing the Rodeo Drive shopping district to cars and pedestrians on November 3 and 4.

“In response to the fact that others believe that our area is one that should be targeted in terms of coming to protest, we feel we have to be responsive and protect everybody,” Beverly Hills Mayor Lester Friedman told ABC 7.

While it’s very unlikely we will know the legitimate outcome of the election until days or weeks after November 3, the president has reportedly told his inner circle he expects to make some type of victory declaration on election night, regardless of the ballots left to count–and that statement could trigger both pro- and anti-Trump activists to take to the streets.

“We have two different, large protests: the protests against police racism and […] far-right militia groups. And you have a president who is prepping and priming his supporters to delegitimize his results,” American University political science professor told The Atlantic. “Objectively, there’s been more violence and more lethal violence committed by the far right.”

A number of pro-Trump protests in the region have already been announced for the coming days. One group is organizing a series of rallies on freeway overpasses around Orange County starting at 3 p.m. on Monday; another “Trump 2020/Back the Blue” freeway protest is planned in Riverside around the same time.

Nonetheless, some officials are cautioning that, while more politically divided pockets of the country could see significant election-related unrest, fears of violent incidents around Los Angeles may be overblown.

“We are very prepared for the elections, but at the same time, I don’t want to buy into a narrative that there’s going to be chaos during our elections,” Mayor Eric Garcetti said last week.

Garcetti noted that there is “no intelligence of a widespread plot” in the region for pro-Trump forces to disrupt voting or make any attempt to contest the outcome which, in California, is expected to be an overwhelming victory for Biden. The mayor noted that the LAPD is on alert, and is prepared to break up violent disturbances if they occur.

“We prepare for the worst, but we are hoping and expect generally the best,” Garcetti said.

RELATED: A Man in a MAGA Hat Was Arrested for Allegedly Dousing Anti-Trump Protesters in Bear Repellent