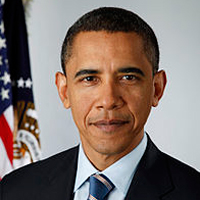 After a performance by the Foo Fighters, Obama opened his remarks at the reception by teasing the crowd for looking like they were cold. “This is balmy, people,” he said, getting laughs. To be fair, the temperature was in the 50s, so yeah, it wasn’t warm.

From there the President went on to talk about what he feels are the best accomplishments of his first term: the economy’s steady recovery, the passing of his health care plan, the ending of “Don’t Ask, Don’t Tell,” the signing of the Lilly Ledbetter Act, and the end of the war in Iraq.

He also laid out the issues he’d like to focus on next: American energy, health care implementation, education, immigration reform, and bringing troops home from Afghanistan.

“I’ll be honest with you,” he said to the group of supporters which included Jack Black, Rashida Jones, and mayor Antonio Villaraigosa, “I’m older now.  I’m gray. I’ve been a little dinged up.  It’s not quite as cool to be on the Obama bandwagon. Back in 2008, it was the new thing. Everybody had their poster, and you’d be talking to your co-workers, oh, have you heard about Obama?  Yeah!  Oh, no, you haven’t?  Let me tell you about him. Now, everybody can pronounce my name…. But that determination, the values that got us this far, are undiminished.”

President Obama will attend similar fund-raising events in Orange County and San Francisco today, where the temperature is in the low sixties. If he’s wondering, we’d agree that’s not so bad.