Home Uncategorized President Obama to UC Irvine Grads: “I’ve Got Your Back” 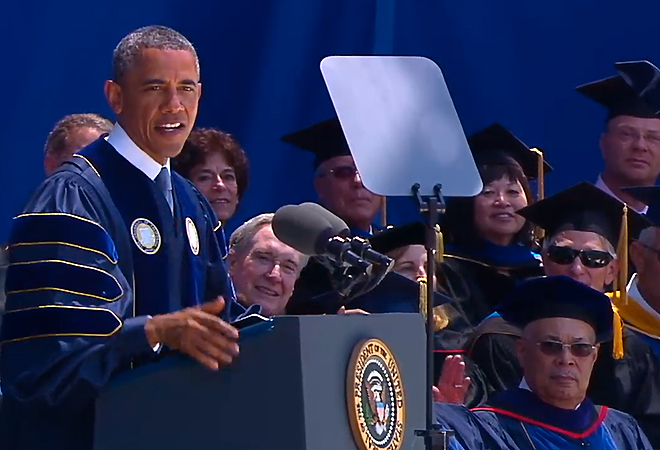 How do you get the President of the United States to speak at your college graduation? Send postcards. Lots of them. That’s what 10,000 UC Irvine students did this year. Their reward: a personal address, delivered by the president, about environmental responsibility and the power of optimism.

“Your generation, the most educated, the most diverse, the most tolerant, the most politically independent and the most digitally fluent in our history,” he told the 8,600 graduates, “is also on record as being the most optimistic about our future. And I’m here to tell you that you are right to be optimistic.”

Obama also touched on climate change—not a surprise given his administration’s recent landmark efforts to cut carbon pollution in America’s power plants—and the ways in which the environment’s health depends upon future generations. “I want to show you how badly we need you,” he told the grads, “both your individual voices and collective efforts, to give you the chance you seek to change the world and maybe even save it.”

“The sooner you [help make a difference], the better,” he said, “not just for our climate, but for our economy.”

“I’m telling you all this because I want to light a fire under all of you,” he said. “As the generation getting shortchanged by inaction on this issue, I want all of you to understand you cannot accept that this is the way it has to be.”

Obama’s message wasn’t entirely terrifying. “Hope is the belief against all evidence to the contrary that there are better days ahead,” he said. “I ask you to believe in yourselves and in one another, and above all, when life gets you down and somebody tells you you can’t do something, to believe in something better.” Hope, he’s still got it.

From Global Scandal to Internet Meme: Obama is Checking Your Email