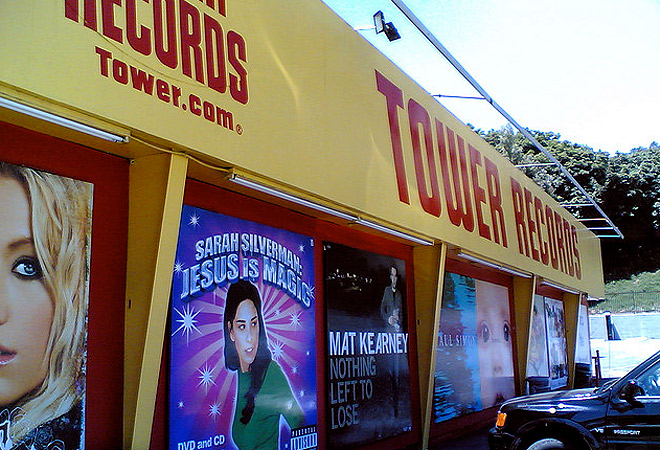 The Sunset Strip is in danger of losing one of its more iconic locales: Tower Records.

Last spring, a case for the building’s conservation was brought before the West Hollywood Historic Preservation Commission, as the property’s owners hoped to demolish the structure and build a multi-level gym (although now, it’s unclear what would go in the space should Tower Records be torn down). The commission came close to protecting the edifice but was ultimately hung up on the fact that it had not retained its original paint colors, thus passing up the opportunity to keep it in tact.

That being said, music fans and historians will have another chance to plead Tower Records’ case this Monday, November 18th, during an appeal to the West Hollywood City Council.

“Tower Records on Sunset was the most visible record store ever,” says Domenic Priore, music historian and author of Riot on Sunset Strip: Rock and Roll’s Last Stand. “I’m concerned about the building getting torn down on some sort of technicality even though it ultimately promoted music for 40 years, the longest stretch of time in the history of recorded music.”

As the original applicant for Tower Records’ preservation, Priore is particularly invested in the abandoned storefront’s future potential. “The city has spent a lot of taxpayer money to find a good location for a Sunset Strip Museum,” he says. “Here you have something that is positioned perfectly to be a history of what the Sunset Strip was in the ’30s, ’40s, ’50s, and ’60s. Visitors would come from all over the world to see what the Trocadero was like or what the original Whiskey was like before it turned into the toilet seat it is now. It’s a perfect match.”

Priore thinks the building has a good chance of being saved by the City Council, if only because the residents of West Hollywood have shot down any new construction that would be larger than Tower Records. In regards to his museum idea, he’s slightly less confident. “I’ve suggested [a museum] to council people and have been ignored,” he says. “I don’t know if their hands are in the coffers of Private Industry, but there needs to be something that would show people what was there. Less commercial interest, more cultural interest.”

Monday’s appeal will be a public affair, taking place at 6:30pm at the West Hollywood City Council Chambers. The public is welcome to speak for two minutes regarding the appeal for Tower Records. For those who’d like to share their thoughts but cannot attend, e-mail [email protected] and [email protected] or call city council offices at (323) 848-6460.

You Won’t See a Tower-Like Documentary About Amoeba Music