This is possibly because voters perceive an increase in crime—in fact, violent crime has seen a sharp increase in Los Angeles, along with robberies and property crimes such as car theft. Understandably, a third of those polled said crime was the most important issue to them.

The city police force currently stands at 9,400 officers, down from 10,000. Both mayoral frontrunners, Karen Bass and Rick Caruso, have argued for a target goal of more than 9,700 officers. 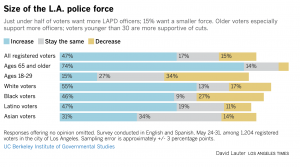 Interestingly, while nearly the majority of those polled opposed a reduction in police rank-and-file, at the same time a similar number (49 percent) felt that it would be best for the city if some of the LAPD’s funding was reallocated to other programs like social services—though a third of respondents said that kind of diversion of funds would leave the city worse off.

Those seemingly conflicting concepts—supporting an expanded force while also supporting the reallocation of its funds—reflects the “ambivalence and complication in how the public thinks about policing,” Berkeley political science professor and co-director of the Institute of Governmental Studies Eric Schickler told the Times.

Regardless of possible solutions, 40 percent of voters said crime in L.A. had increased “a lot” in the city over the last two pandemic years, and 25 percent said it had “somewhat” increased.

Still, some Angelenos find the police force itself to be a bigger threat than crime, with a perceived ever-widening racial disparity. Just 15 percent of voters said that the LAPD treated every racial group equally. In 2009, it was a third of voters.

More than half of those surveyed believe that LAPD officers come down harder on Black residents—that’s up from a third in 2009 as well. And there were similar results from those who think the LAPD is harder on Latino residents, from 16 percent in 2009 to 24 percent today.

Voters were split again on their feelings about the police when asked if officers make them feel mostly safe or mostly anxious, with 41 percent of voters responding that police made them feel mostly safe, and 36 percent saying cops mostly made them anxious. Among Black voters, 43 percent said LAPD officers gave them heightened feelings of anxiety, while 45 percent of Latino respondents felt that way.

When pollsters asked voters throughout the state about their perception of crime, a full 75 percent of California residents said crime had increased over the last two years, compared with 65 percent of Angelos.

Watch Out! Cops Say WeHo Pickpocket Problem is Out of Control