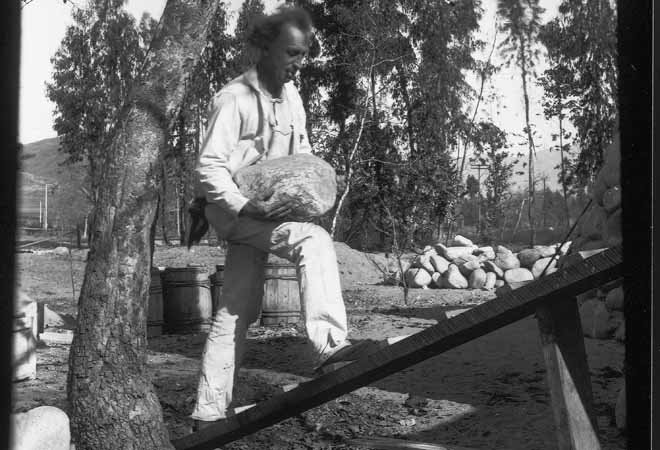 Charles Fletcher Lummis carrying what would be a piece of his house.

This week, Richard and Kim discuss how, thanks to a judge’s ruling, Hannah Carter’s Japanese Garden gets to stay at UCLA, but the film projector in the newly-renovated Chinese Theatre gets the boot. The pair also delve into some of the “troubling changes” at the Crystal Cathedral and the upcoming restoration of the historic windows in Highland Park’s Masonic Hall.

In this exclusive clip, poet Suzanne Lummis and Executive Director of the Southern California Historical Society Patricia Adler-Ingram compare stories about the Los Angeles poet, Charles Fletcher Lummis, whose legacy as a writer and Los Angeles Times editor reaches as far as post-modernist poet, Charles Bukowski. Both men were deeply connected to the city: even after gaining a cult following in Europe, Bukowski could be counted on to send pieces to small, “crappy” L.A.-based poetry magazines, and Lummis built his house by hand while publishing promising “cowboy” literature. His house still stands today and the doors, according to his granddaugther, are a “pleasure to open and shut.”