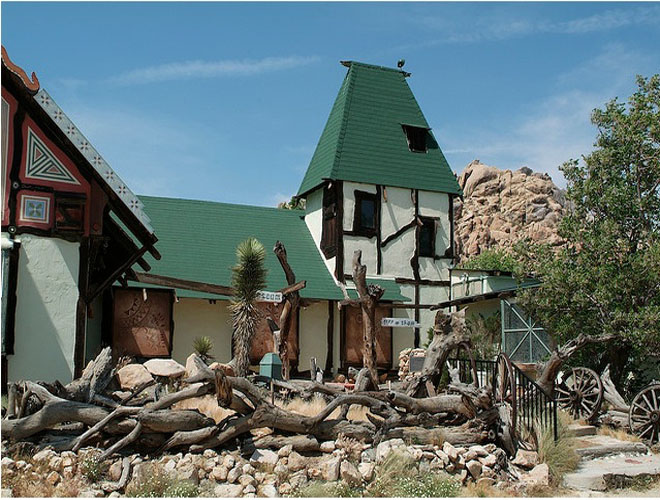 Share
Email
Facebook
Twitter
Pinterest
ReddIt
You Can’t Eat the Sunshine is a weekly podcast series produced by Kim Cooper and Richard Schave in which the Esotouric founders talk with L.A. personalities about the city’s myths, contradictions, and inspirations.
This week, Richard and Kim talk with Peggy Ronning, curator of the Antelope Valley Indian Museum, about the museum’s fascinating origins as a Hollywood set decorator’s fantasy getaway, his controversial collecting methods, and how the State Parks Service is bringing the building and collection into the 21st century.
Richard and Kim also visit with artist and filmmaker Stephen Seemayer to get the story behind his Arts District documentary “Young Turks” and “Red Zone” downtown happenings of the early 1990s.
Plus we’ll discuss the Historic Cultural Monument applications for the Alexandria Hotel and Johnie’s Coffee Shop, Councilman Jose Huizar’s motion to permit more sidewalk dining downtown, thoughts on the V.A.’s circa 1900 Wadsworth Chapel and Street Car Depot, and the historic tile installation planned for the Monrovia Gold Line Station. All this and more, as Kim & Richard usher in the week of June 10, 2013.