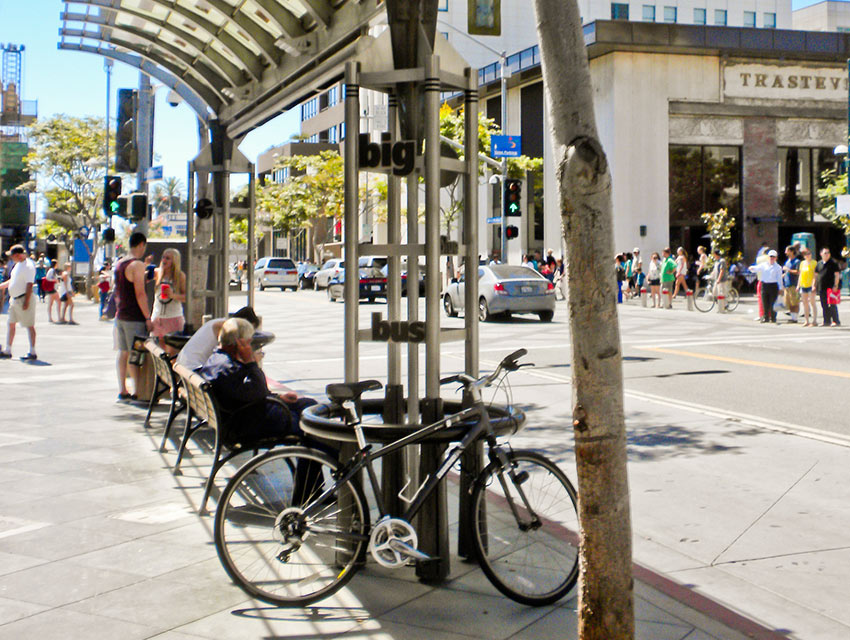 Over the summer, we were thrilled to hear a new bike share program could be headed downtown. Well, the idea’s picking up speed. Mega-complex One Santa Fe will unveil the city’s first private bike share program in early December, in conjunction with the building’s completion, and now another bike share program, one based in Santa Monica, is also becoming a reality.

The Westside project has a unique twist: You can suggest where bike hubs should be located. What a fantastic way to engage locals and activate a part of the city! Because Santa Monica is a condensed catalogue of so many Los Angeles lifestyles, pinpointing optimal spots for bike hubs will be hard. We’re taking a crack at it anyway. Here’s our take on where the bikes should be:

1. 28th Street & Ocean Park Avenue
Bike hubs should be central to more than one sub-’hood of Santa Monica. The intersection of 28th and Ocean Park is close to many things: Clover Park, the Santa Monica Airport, and Barker Hangar are a skip away, Santa Monica City College is down the road, and the location borders Mar Vista, too.

2. 16th Street & Colorado Boulevard
Like 28th and Ocean, placing a hub near the Santa Monica City College campus could be a boon for the bike share program (and that’s not only because KCRW is there). Plus, this is the spot of a future Expo station. See how that works?

3. Tongva Park
A bike hub should no doubt go near the Santa Monica Pier and Third Street Promenade, but ideally in a place that’s equally accessible to locals who, realistically, will be the share program’s biggest users. Locating a hub in the one-year-old park allows non-Westsiders the freedom to travel from the Promenade without a car, enabling them to wander various oceanside points of interest. Plus, what’s wrong with drawing tourists into some green space? This would be a win for locals because of the park’s proximity to the 10 freeway.

4. Main Street & Marine Street
Main Street and Rose Avenue may be the two busiest streets for locals of Santa Monica and Venice. Instead of throwing casual or serious bikers into their hectic intersection, a hub would be better suited at Main Street and Marine. This would offer a safer departure point south to Abbot Kinney or north to the heart of Santa Monica. It’s also the perfect starting point for moseying down Main.

5. Douglas Park
Perhaps the furthest inland and north you could put bikes while staying within Santa Monica, a hub at Douglas Park could be attract a large number of people; it’s close to Wilshire and provides easy access to the Brentwood Country Mart or the beach. Like Main and Rose, Wilshire isn’t a safe place to for casual bikers. But at California and 25th you get less traffic and a park.

If You See People in Headphones on the Santa Monica Pier, They May Be Watching You