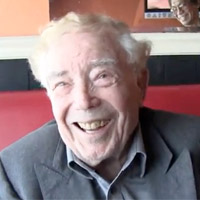 Los Angeles has lost one of its oldest residents. Local photographer Otto Jensen was struck and killed by 91-year-old Mary Beaumont yesterday in Burbank while crossing Olive Avenue. Jensen, who was 101 years old, suffered serious injuries from the accident and was pronounced dead at Saint Joseph’s Medical Center Tuesday evening.

The Danish man was originally a boxer (nicknamed BoneCrusher) before settling in Burbank and opening his eponymous photography studio in the 1950s.  Throughout his half-century-long career he snapped stars such as boxing great Joe Lewis and singer and actress Debbie Reynolds.  Last April, Jensen served as the grand marshal of Burbank’s centennial parade, celebrating both his and the city’s 100th birthday.

Beaumont, who sits on the Burbank Public Library’s board of trustees, was questioned and released by police.  While she is not being charged for Jensen’s death, an investigation regarding the accident is underway.