How do you find a lawyer in Los Angeles? You could try asking a trusted friend for a recommendation. Or you could simply drive along Wilshire Boulevard, where so many personal injury lawyers now hawk their services with outrageous, eye-catching billboards, it’s a miracle that the Miracle Mile isn’t gridlocked by fender benders.

“WE DIDN’T MEET BY ACCIDENT,” blares one for the Pirnia Law Group, featuring a goateed hipster in sunglasses who looks more like an extra out of Reservoir Dogs than an attorney. (In case anyone misses the Hollywood allusion, there’s another billboard that proclaims the firm is like “‘ENTOURAGE’ MEETS ‘SUITS’”). Yet another references last fall’s Bernie Sanders meme, with Sanders bundled in a parka (“DON’T GET BERNED BY INSURANCE COMPANIES”). Then there’s the one from an employment attorney that inquires, “HOSTILE BOSS?” over a background of what looks like blood spatter. Who are these attorneys channeling Better Call Saul’s Saul Goodman? Ladies and gentleman of the jury, we present: Sweet James, Esq. and Uncle Ardy, Esq.

“Some advertising that you see for lawyers does make you scratch your head,” notes law professor Adam Winkler, who teaches legal ethics and constitutional law at UCLA. “It probably hasn’t done a lot to help the image of the bar.”

Up until about 45 years ago, it was actually illegal for lawyers to advertise. But in the early 1970s, two UCLA law graduates, Leonard Jacoby and Stephen Meyers, dared to hold an open house in a Van Nuys strip mall for their new personal injury firm. The event drew so much media attention that the California bar attempted to sanction them, arguing that the publicity was an end run around the law. Naturally, Jacoby and Meyers took the case to court—the California Supreme Court—which ruled that preventing lawyers from promoting themselves in interviews violated their First Amendment rights. In 1977, the U.S. Supreme Court threw the gates open even further, affirming in a separate case that lawyers had as much right to advertise as any other business. Back in L.A, Jacoby and Meyers celebrated that ruling by running their very first TV commercial.

That first ad (offering a consultation for just $20) was a white-shoe affair compared with the histrionics of today’s. L.A. attorney James Bergner—the aforementioned Sweet James—hired tough-guy actor Danny Trejo to shoot an ad for his firm. “When the boogey man goes to sleep at night, he checks under his bed for me,” a shirtless Trejo sneered into the camera while cracking his knuckles. “But if I get into an accident, I’m calling the boss—James Bergner.” Since then, “the boss” has plastered his image on billboards and bus stops all over L.A. and can be found on social media strumming an Eddie Van Halen-signed guitar, at the track on his custom motorcycle, or posing with his wife, Noella Bergner, a former model who, as it happens, was just cast as a regular on next season’s Real Housewives of Orange County.

Personal injury attorney Ardy Pirnia—the Beverly Hills-born Iranian American who calls himself Uncle Ardy—portrays himself on his billboards as a problem-solving member of the family. “I’m your uncle in the sense that if anything happens to you, whether it’s an accident, whether you have baby-mama drama, whether you have a business dispute, the first person you think of is [me],” he tells Los Angeles. Pirnia fine-tuned the demographics of his billboard campaign so that he’s Tio Ardy (Spanish) in the Inland Empire and Amoo Ardy (Farsi) in Westwood. Before Pirnia started advertsing, every time he saw a personal injury lawyer’s billboard, he “wanted to throw up,” he says. “Who sees a billboard that says, ‘Injured? Call me’ and thinks, ‘That’s my guy’ ?” As for his goatee-and-sunglasses persona, Pirnia cops to being a big Tarantino and Liev Schreiber fan. “I told my artwork guy there were three movies I love: Give me a billboard that looks like Pulp Fiction meets Ray Donovan meets Reservoir Dogs.” 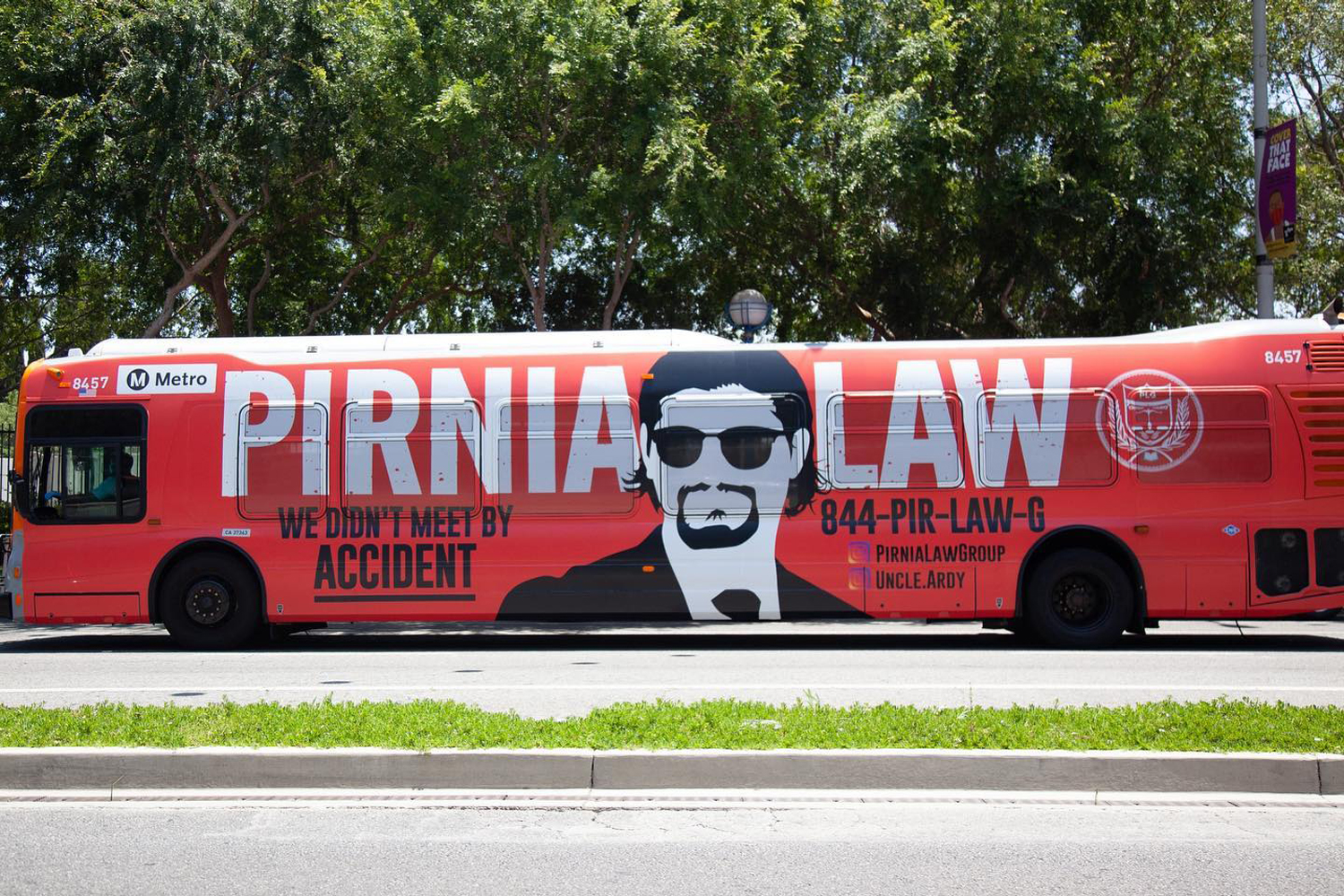 The OG of eye-popping lawyer billboards is arguably Jacob Emrani, whose “Call Jacob” ads have made him almost as big a local celebrity as Angelyne. “We take it as a compliment that other attorneys are following our marketing,” Emrani says. Perhaps his most notorious pitch was deliberately hung upside down with the advisory, “One call to the billboard company to flip our board right side up, one call to Jacob can do the same for you!” Emrani says, “Even upside down you can still read ‘Call Jacob.’”

Another Emrani classic: his 2018 billboard imploring NBA star LeBron James to sign with the Lakers, which generated scads of free press for his firm. When James ultimately did sign, Emrani was rewarded by becoming the team’s “official” personal injury lawyer, triggering a race among law firms to align with the city’s sports franchises–Jacoby and Meyers landed the Dodgers, Sweet James got the Clippers, Pirnia just signed with the Chargers.

At these mid-sized local firms, the person on the billboards is actually a person in the office. While Len Jacoby is still affiliated with the L.A. office of Jacoby and Meyers, Irvine attorney Steven Mehr bought the right to use the name elsewhere in California, leading to confusion and bad PR when Mehr was recently indicted for an illegal client-referral scheme. Still other national partnerships like Sokolove and Goldwater function less like law firms than ad houses with legal-referral services.

Personal injury lawyers measure success by money won, and their websites and social media are plastered with aggregate (over $100 million lifetime for Pirnia), ongoing ($12 million in June, boasts Bergner), and individual ($6 million for an auto accident for Emrani) totals. Pirnia says the billboards are much more efficient than outsourcing marketing to companies that charge $15,000 a month for things like a 1-800-lawyer number. “I can’t point to one billboard and say, ‘Hey, this necessarily got me this client,’” he concedes. “The main objective of the billboards was to brand.” He thinks the ads buy a young lawyer like himself credibility with potential clients, who, he says, deduce, “There’s no way this guy’s putting up these billboards if he isn’t good at what he does.” Bergner spends $10 million a year on promotional activities, according to a 2020 lawsuit. That’s an awful lot of dough to invest in what some see as glorified ambulance chasing.

As tacky as these roadside distractions may seem, there is a positive civic upside, at least according to UCLA’s Winkler. “They play a very important role in the delivery of legal services to people of ordinary means, who don’t have access to law-firm culture, who don’t have lawyers in their families,” he says. “They say, ‘We are ordinary people—people of color, first-generation immigrants, people who speak another language, and who can provide you good-quality legal services in a legal system that wasn’t built for you.’ I think that’s very important.”