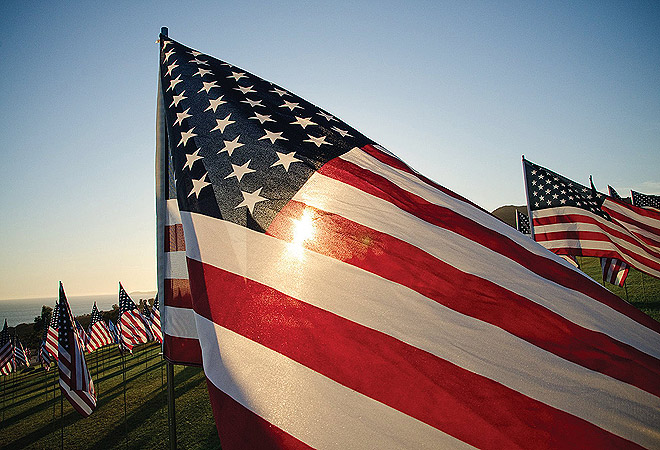 At 8:46 a.m. this morning, the exact moment the first plane struck the south tower of the World Trade Center in 2001, President Barack Obama walked down to the south lawn of the White House to lead a moment of silence honoring the men and women who lost their lives twelve years ago. Shortly thereafter, he attended a memorial service at the Pentagon, delivering a speech that both paid tribute to the victims and praised the survivors.

“It is an honor to be with you here again to remember the tragedy of twelve Septembers ago—to honor the greatness of all who responded and to stand with those who still grieve and to provide them some measure of comfort once more,” he said. “Together we pause and we pray and we give humble thanks—as families and as a nation—for the strength and the grace that from the depths of our despair has brought us up again, has revived us again, has given us strength to keep on.”

While President Obama spoke on the East Coast, Malibu’s Pepperdine University commemorated the events of 9/11 with a gesture both moving and poignant: Nearly 3,000 American flags ornament the school’s lawn—one for each victim of the attacks.

In addition to Pepperdine’s “Waves of Flags” display, there will be several other events happening across Los Angeles, including a citywide service at the LAFD Frank Hotchkin Memorial Training Center, a Remembrance Night at tonight’s Dodgers game, and a ceremony at the 9/11 Memorial Fountain at LAFD Station 88. For a full list of happenings, visit the Los Angeles Fire Department website.