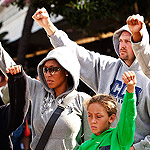 UPDATE: The peaceful protests sparked by Saturday’s acquittal of George Zimmerman in the death of Trayvon Martin turned violent on both Monday and Tuesday nights in Los Angeles and Oakland. According to police chief Charlie Beck, 13 rioters were arrested on Monday with nearly two dozen being taken into custody on Tuesday.

Peace may be hard to come by, however, when advocates like Reverend Al Sharpton continue to call for action. Politico is reporting Sharpton’s plans for a “Justice for Trayvon National Day of Action,” which he has slotted for this Saturday in several cities across the country. In Los Angeles, Sharpton’s civil rights organization, National Action Network, will hold rallies at both the federal courthouse on Spring Street and Berendo Middle School. “It’s not over. And we are going to make sure it’s not over, that’s why we’re calling people to…organize in your city. I don’t care if it’s 20 people, we want to show the nation that over 100 cities a week later is still demanding justice. We’re not having a fit, we’re having a movement,” Sharpton said.

[Posted on July 15th, 2013]: In conjunction with protests in East L.A. and on Crenshaw Boulevard, Angelenos assembled yesterday on the 10 freeway to decry the verdict over the death of Trayvon Martin, which was ruled as self-defense. After more than 16 hours of deliberation, the six women of the jury declared Martin’s shooter, George Zimmerman, to be innocent of second-degree murder and manslaughter.

A 17-year-old African-American high school student, Martin was shot and killed by Zimmerman last year in Florida. The shooting occurred when Zimmerman, a neighborhood watchman, confronted Martin on account of what he considered to be suspicious activity: walking around a gated community in the rain while looking at all of the houses. Zimmerman claims that Martin sucker-punched him and then began beating his head against the concrete, which is when he shot Martin once in the chest. Zimmerman claimed self-defense; Martin was unarmed.

Los Angeles-based photojournalist Ted Soqui, who also captured L.A. riots in 1992, documented a protest that effectively shut down the freeway for 24 minutes. According to CBS Los Angeles, approximately 200 protestors took a stand on the 10’s southbound side, where at least one person was arrested on suspicion of throwing debris at an officer. Riot police shot rubber bullets into the crowds in an effort to disburse them. Above, see a slide show of the rally.

Earl Ofari Hutchinson: Why the City of L.A.’s “Gesture” for Trayvon Martin Matters