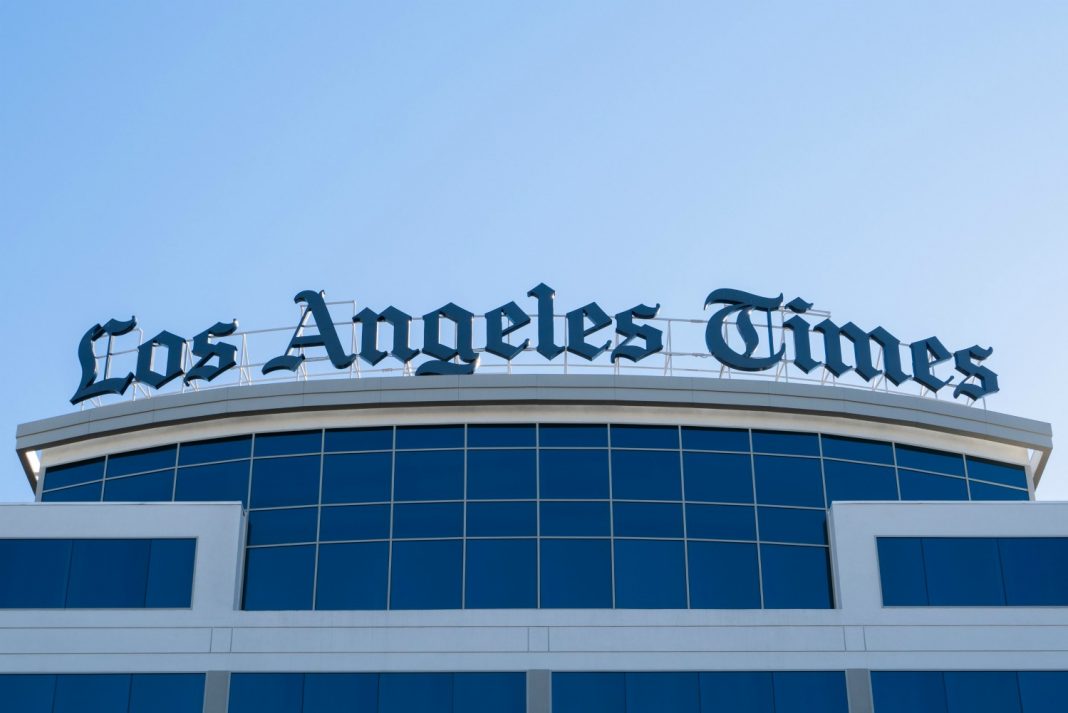 After the death of Jonathan Gold, the Los Angeles Times decided it would need two critics to take up the mantle. In December 2018, the paper named Patricia Escárcega and Bill Addison as co-critics, and sent the pair out together to promote a purported “revival” of the publication’s food section. Together, the theory went, the pair could more effectively cover the breadth of dining in Los Angeles.

Addison, 48, is a white man raised in Maryland, who was a James Beard award-winning National Critic for Eater before joining the Times. Previously, he wrote about dining for Atlanta Magazine (owned by the same publishing group as Los Angeles), the Dallas Morning News, and the San Francisco Chronicle, and Creative Loafing, dating back to 2002.

Escárcega, 40, an Inland Empire-bred Latinx woman, who came to the Times after covering food for the Arizona Republic, Phoenix New Times, and USA Today. She first began writing about food in 2010, after completing her second graduate degree from the University of Arizona.

“I grew up about an hour from here, in Riverside, and my childhood was the opposite of Bill’s,” Escárcega told Los Angeles last year, in a conversation about the pair’s hiring. “We never did anything resembling white-tablecloth dinners. But my family bonded a lot over food, especially with my mom. She had grown up in a tiny town in Mexico, and at dinner she’d tell us stories from her childhood, and it made me realize how different her childhood was from mine. We filled that gulf talking about food. Where she grew up, every morning women would wake up early and make the masa from scratch. Stories like that fascinated me.”

Behind the scenes, Escárcega has alleged in a series of public statements, she was never made to feel fully respected by management. Eventually, she also became aware that Addison, the person she understood to be her direct peer, was being paid significantly more than she was.

“Why hire the first Latinx restaurant critic in the history of the [Los Angeles Times], and then pay them so much less for doing the exact same work? I refuse to let this discrimination stand. It is immoral, unethical, and illegal,” she posted on Twitter.

Escárcega filed a pay discrimination complaint through the Los Angeles Times Guild, the union which represents journalists working at the paper. Her complaint was separate from the class-action lawsuit recently settled by the Times, in which 240 Black, Latino, and female journalists alleged they were paid less than white male peers.

It sends a heart-breaking message to every Latinx kid like me, who dreamed of some day writing for the @latimes; to our readers, who deserve a paper where Latinx and women are valued and paid the same as their white male counterparts (and where the emotional toll and pain of…

Escárgcega says that over the summer she was given an initial response from management that she felt indicated a willingness to address the discrepancy–but, on November 15, nearly six months after filing the complaint, she posted on Twitter that she’d finally received a formal response with a very different tone.

“The two-page memo that [the Los Angeles Times] sent me yesterday was extremely painful to read. In the memo, the L.A. Times said that I am not worth the same as my male or white colleagues,” she wrote. “The letter says I deserve to make only two-thirds of what my co-critic is paid–even though we have the exact same job responsibilities–because I do not bring prestige to the paper, and because the company says our job classifications aren’t the same.”

In her tweets, she says the memo informed her that “the company classified [her] as a junior critic” without ever previously informing her of that status. She says she was expected to do the same work as Addison, “held to the same expectations and standards,” and had no reason to believe they were not equals.

While “prestige” brought to the paper may be intangible, Escárcega’s hiring was part of a mini-boomlet of women of color taking prominent roles as food critics at West Coast newspapers. She was brought on around the same time that Tejal Rao became the California restaurant critic for The New York Times and Soleil Ho took over as restaurant critic for the San Francisco Chronicle. For many, Rao, Ho, and Escárcega represented an overdue shift in how mainstream outlets covered food and dining.

“When I started my job as a critic, alongside Tejal Rao and Patricia (and Bill!), we were held up as a promising fresh start for CA food media. So awful to learn that for Patricia, it was hot air to veil the fact that she was being treated as inferior—a novelty,” Ho wrote on Twitter. “[Escárcega] has consistently published some of the most exciting and essential work I’ve ever read in this genre, and for her to be clandestinely classed as a ‘junior critic’ is absolutely ridiculous.”

Addison addressed the controversy with a tweet of his own, claiming that he submitted a letter for management saying he felt Escárcega should be compensated fairly for her labor.

“I stand with Patricia in her fight for equality,” he wrote. “We are co-critics, we perform the same job, we should be paid equally.”

In a statement released by the Los Angeles Times Guild, the union also expressed that it stands behind its member, noting that, “we urge the company to reconsider its regrettable position on this grievance and commit to equality.”

A statement from the Los Angeles Times submitted to Los Angeles after the initial publication of this article reads as follows:

“The company denies the discrimination claims that Patricia Escárcega has alleged in social media posts. For the employees, including Ms. Escárcega, who are represented by the Guild, the company and the Guild agreed on a pay scale which was approved as part of the collective bargaining agreement (CBA), 388 to 3, in October 2019. Her pay is based on the framework in the CBA that was agreed upon and ratified by an overwhelming majority of the bargaining unit. The company has invested millions of dollars in improving salaries for the staff as part of the CBA.

The Media Guild of the West and the company agreed on a wage scale based on job classification and years of experience in the media industry. Prior to finalizing the wage scale, the company and the Guild allowed time for bargaining unit newsroom employees to challenge job classifications or experience ratings. While several individuals made such challenges, Ms. Escárcega did not do so. Once those challenges were resolved, the Guild and the company agreed in the CBA that initial placement on the wage scale of an individual such as Ms. Escárcega “shall not be subject to grievance and arbitration.”

Ms. Escárcega nevertheless filed a grievance through the union challenging her pay, which is based on her placement on the wage scale. She performs the same job duties today as when she was hired. Ms. Escárcega’s pay differs from that of the colleague to whom she is comparing herself because he has significantly more experience than her as a critic and has won one of the most significant awards in food journalism. Experience is a bona fide factor justifying different pay amounts for employees under California’s Equal Pay Act.

Ms. Escárcega’s compensation is well above the scale for her job classification and experience.

The company has implemented many processes to address fairness and equity in pay. We take seriously our commitment to building a strong culture among our employees, one that values diversity, promotes inclusion and cultivates fairness.”