Home Urban Development Will Doing Away with Parking Minimums Be Good for DTLA? 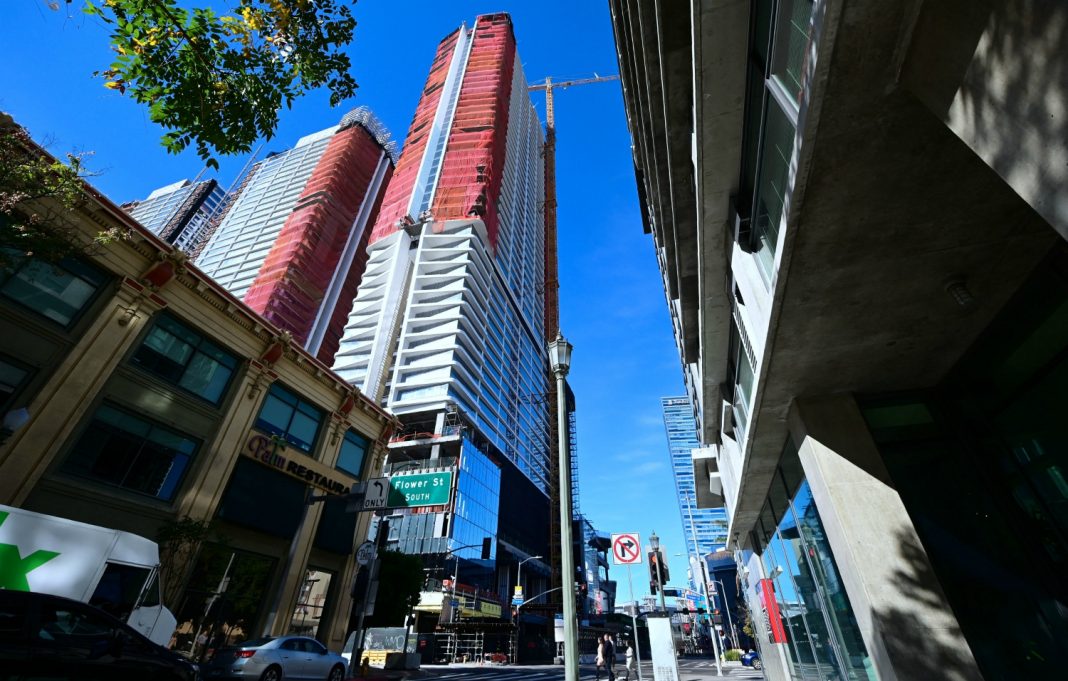 Downtown Los Angeles has become a hub of housing production in the region. It’s also a place where you often encounter infuriating, steering wheel-gripping gridlock. Now a move is afoot to spur construction and, ideally, reduce the time drivers spend seething in their cars. It also just might make housing development more affordable—although don’t hold your breath for those savings to trickle down.

Last Thursday, the Department of City Planning released a plan that would do away with parking minimums for future housing projects in downtown. The idea is that there is already an abundance of ways to navigate the neighborhood without climbing into a personal vehicle.

“Nowhere is the diversity of alternatives to car travel more evident than in this urban core,” reads a press release from the department. “Today, bike share, localized bus services, shuttles, and scooters offer faster—as well as more convenient and affordable—alternatives to paying for parking.”

Downtown, as everyone knows, has experienced monumental growth in the past two decades, transitioning from a hub for government and white-collar workers that was dead after dark to a thriving community jammed with high-end housing and an array of restaurants, bars, and cultural institutions that lure people well into the night. Once-sleepy neighborhoods such as South Park and the Arts District are now packed with housing complexes and businesses, and street parking can be hard to find.

Since 2000, when the first new housing developments started opening in downtown, the residential population has climbed from approximately 18,000 people to an estimated 80,000, and the vast majority of the additions have been market-rate. Yet the current figure may be only a midpoint: according to the Downtown Community Plan, often called DTLA 2040, downtown will see an additional 125,000 residents by 2040.

That’s not all: the area will also gain 55,000 jobs and 70,000 housing units by that time (the plan cites the Southern California Association of Governments as the source for the figures). The Planning Department points out that the 70,000 units would make up 20 percent of the city’s projected housing growth on just 1 percent of its land.

If each new household brings just one car to the area, imagine the impact on the streets. The idea of reducing or eliminating parking requirements in downtown has been kicked about for years, and springs from the recognition that many new residents live in close proximity to their job. With the ability for people to walk to work—or utilize an alternative mode of transportation such as a DASH bus, bike, or even a scooter—these new inhabitants often don’t need the two parking spaces found in the stereotypical suburban garage. The environmental benefits of fewer cars on the road are obvious.

When Santa Monica did away with parking minimums two years ago, then-mayor Ted Winterer framed it as an environmental issue, saying in an L.A. Times op-ed, “We can’t reduce our [carbon] footprint and do our part to fight climate change without driving less.”

There’s a cost consequence to the minimums as well: building parking is expensive. In a 2014 publication, UCLA parking expert Donald Shoup investigated how cities’ minimum parking requirements impact the price of construction. He found that it costs an average of $27,000 to build an aboveground parking space in Los Angeles, and $35,000 for an underground space. Construction of all kinds has only become more expensive since then.

Parking in new downtown buildings is often either underground, or in the case of a high-rise, in an aboveground “podium” on the lower levels of the complex (the podiums are covered with scrims or design schemes, with varying levels of attractiveness). Shoup’s paper stated that parking requirements in Los Angeles typically reduce the number of units a developer can create by 13 percent.

Eliminating parking requirements doesn’t mean that cars would automatically disappear from new downtown housing complexes to be replaced by even more luxury apartments—while some developers might eschew building floors where a sea of vehicles sit for a dozen or more hours a day, others would continue to create spots for cars in order to satisfy the demand of a clientele willing to pay for in-building parking.

There is also no guarantee that local residents see any benefit. While a developer who erects an apartment complex with limited or no parking might feel market pressure to charge less than nearby buildings, it is also highly possible that that this doesn’t happen in a tight housing market, and the building owner charges rent similar to what is in the neighborhood and pockets the profit.

Limited parking in new buildings could also pose challenges when residents host guests or family members—visitors who drive in will need to park someplace, which could mean high rates for street parking or neighborhood lots.

In addition to the change in parking policy, the City Planning proposal also envisions tweaking existing code to allow housing construction in more of downtown. The Draft Community Plan says housing is now allowed in 33 percent of the area. The new vision would boost that to 60 percent of the neighborhood covered in the plan.

Director of planning Vince Bertoni pitched the plan as a sea change in how the city strategizes for growth in the neighborhood. “For decades, we’ve prioritized shelter for cars over people by requiring parking minimums in downtown,” he said in the press release. “All of that changes today with the new policies that we’ve laid out in this plan. We’re removing onerous regulatory requirements that have either slowed or impeded development— unlocking in the process the potential for new housing and jobs.”

Of course, a plan is just a plan, and in Los Angeles altering code proceeds at glacial speed at best. The City Planning Department is just beginning to solicit feedback on the proposal, and will spend 2020 reviewing comments before making changes and offering a final proposal to the City Planning Commission.

There’s also the opportunity for public input. Anyone who wants to learn about or weigh in on the Downtown Community Plan has a chance in the coming days. An open house took place Saturday, and another will be held on Tuesday, November 5, from 4-8 p.m. at the Pico House. Additional information is on the City Planning website or dtla2040.org.