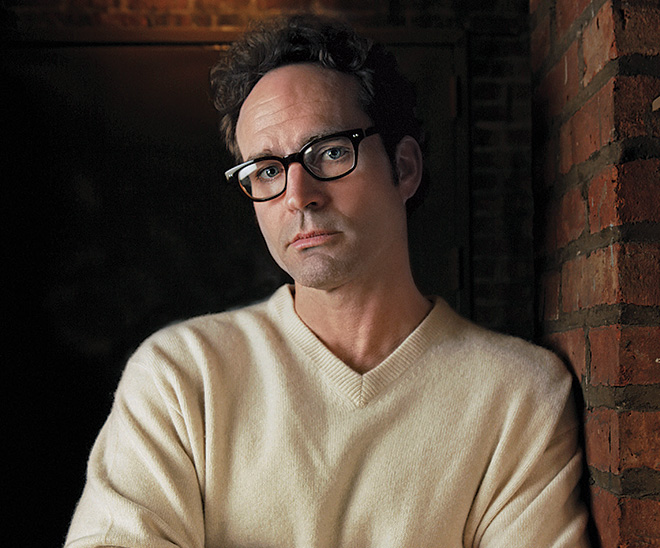 In the last couple of years, actor Jason Patric has been back in the public eye, starring in an ongoing real-life drama, a child custody battle with an ex-girlfriend. In 2002, Patric met and fell in love with Danielle Schreiber, the owner of a massage business. At one point Schreiber attempted to become pregnant, with Patric undergoing surgery after they failed to conceive. The result? Nada. When they took a romantic hiatus in 2009, he provided her with sperm so she could try artificial insemination. It worked, and Baby Gus was born. His parents reconciled. There are happy pictures of them romping on a beach with their towheaded offspring. Two years later the relationship ended, with Patric suing for shared custody. But Schreiber closed the door: no phone calls, no visitation. She even won a restraining order to keep him away from her and Gus.

Throughout the ordeal Patric has been making the media rounds, talking to anyone who’ll listen. At 48, he still has a brooding, if slightly thickened handsomeness and a persuasive way in front of a camera, qualities that helped him win a breakout role in the 1987 film The Lost Boys, a teenage vampire flick. He had a hot run in subsequent movies like Speed 2: Cruise Control and a romance with Julia Roberts, among other beauties. In short, he was an out-of-the-gate successful Hollywood leading man. But he apparently became more particular or more difficult, and the parts haven’t been that good, and now he is middle-aged. As he struggles to gain access to the boy he considers his son, I view him with empathy. He is staked to this preschooler and this fight. These battles are always wrenching and disturbing—watching a little one who doesn’t know any better being fought over by adults who should. Morally, in my book, Patric is the winner already, but that doesn’t get you a kid to tuck into bed at night.

He lost the first round in court. The problem is that conception took place in a clinic, not in coitus. Had Gus been conceived in the latter fashion, Patric would be the legal father, with all the attendant rights and responsibilities. Under California law, he is recognized only as the sperm donor, with no parental privileges. Schreiber says she always intended to be the sole parent, a claim that sounds a tad suspicious given that she pursued the traditional means of procreation until they failed to produce a baby. For his part, Patric says he chose not to be cited on the birth certificate as the father to spare the boy the paparazzi. That also sounds fishy. Was Jason Patric still such a big star at the time? But he has hung in, and recently a California appeals court reversed the original ruling. Patric can pick up where he left off, pressing his right to be named the legal father of the now four-year-old boy.

We may never really know who said what to whom along the way, what promises were made, what intentions shared. Perhaps Patric was blindsided by love once he saw the child. We’re in a new era when it comes to fathers’ affections. You see it everywhere, even with the stubble-chinned millennials gently carrying their babies atop their shoulders or cuddling them against their chests. The other day, at a coffee place, I saw a large guy in a sloppy T-shirt, his arms inky with tattoos, delicately cradling a tiny girl in his arms. I have to say, it was a magical tableau: the tot in her pink dress nestled against those tats. Clearly Patric wants to share in the joy, maybe more so than others. The movie business can be cruel and quixotic, and stardom isn’t all it seems. Then a miracle happens, and life takes on a sweeter meaning: You have a son, and you want to be near him and smell him and hold him and take him to the coffee place where the other guys are. Only you aren’t his father, not legally anyway, and you can’t get near him. And that breaks your heart.

Most sperm donors—tens of thousands of babies are born in the United States each year, courtesy of their offerings—prefer to remain anonymous and as removed from fatherhood as possible. They go to a clinic, leave a specimen, pick up their $100 (roughly the going rate per donation), and sail back to their lives. Years ago I interviewed a host of donors for a story and was struck by their sturdy good natures and general good looks. As I recall, quite a few were medical students, and their need for quick cash was tinged with altruism as well as a little narcissism. When I asked whether they thought about the (many) children they might be responsible for, every one of them pushed away the question. This was a business transaction. They assumed the papers they’d signed would forever shield their identities and absolve them of any financial obligation for the living, breathing results of their contributions.

I understand the choice made by Schreiber to not go the anonymous route. She had a guy right there, a tall, dark, alluring one who was ready to do her bidding. She knew his quirks, his gifts, his values—and yes, his shortcomings. But what did she know of his heart? Could she not foresee his longings? There’s no doubt that Patric’s celebrity has highlighted an issue to which people have been largely oblivious. In response to his plight, Jerry Hill, a state senator from San Mateo, introduced SB115. The bill would allow the court to consider granting parental status to a donor who had established a relationship with the child. But how to determine that? In Gus’s case, his parents have been trading charges about who did or did not attend his circumcision ceremony. Meanwhile SB115 passed the state senate but stalled in the assembly judiciary committee. Many men—and their children—owe Patric a debt of gratitude for at least inciting some sort of legislative action.

Of late more offspring of sperm donors have gone looking for their biological families, including their half-siblings. There is something primal about wanting to meet and know your kin, to take the measure of their habits and hobbies and health, look them in the eye and learn what makes them laugh. I have friends who have instituted their own sorts of half measures with their donors—gay couples and single women, in particular, who have asked a friend to help. In these instances, the donor is not the dad of record, though he has become a kind of doting (sometimes overdoting) uncle figure slipped into the birthday and holiday pictures. But Patric does not want to be the adoring uncle or the walk-on male with precarious visitation rights. He wants full, legal access; he wants to be there, pitching in.

The issue is coming up, too, with regard to donor eggs. I had to face that one head-on. Like Schreiber, I went through a protracted and, in my situation, unsuccessful infant quest. Long married and in my forties, I was finally offered the eggs of a younger woman. I remember being handed a scrapbook of potential donors. Feeling queasy yet hopeful, I turned the pages, taking note of a particularly striking blond coed with a dazzling smile and impeccable grades. Was she the biological mom of the baby I hoped for? Would she welcome contact from my child down the road? Would her other children? Would I be OK with that? Maybe I was just winded, but I backed off, anticipating the emotional ramifications.

One thing is clear: Whatever happens during the next legal go-round, Gus will know at some point in his life that his donor, his dad—call him what you will—fought to see him and love him and help raise him. Schreiber has to sense this. She may hate her ex-lover by now, but to continue to keep the child from him will ultimately backfire. She must realize that, too. The winning hand she might currently be holding is also the losing one.