Home Health These Products Promise to Keep You Safe from Unseen Threats—Are They Worthwhile? 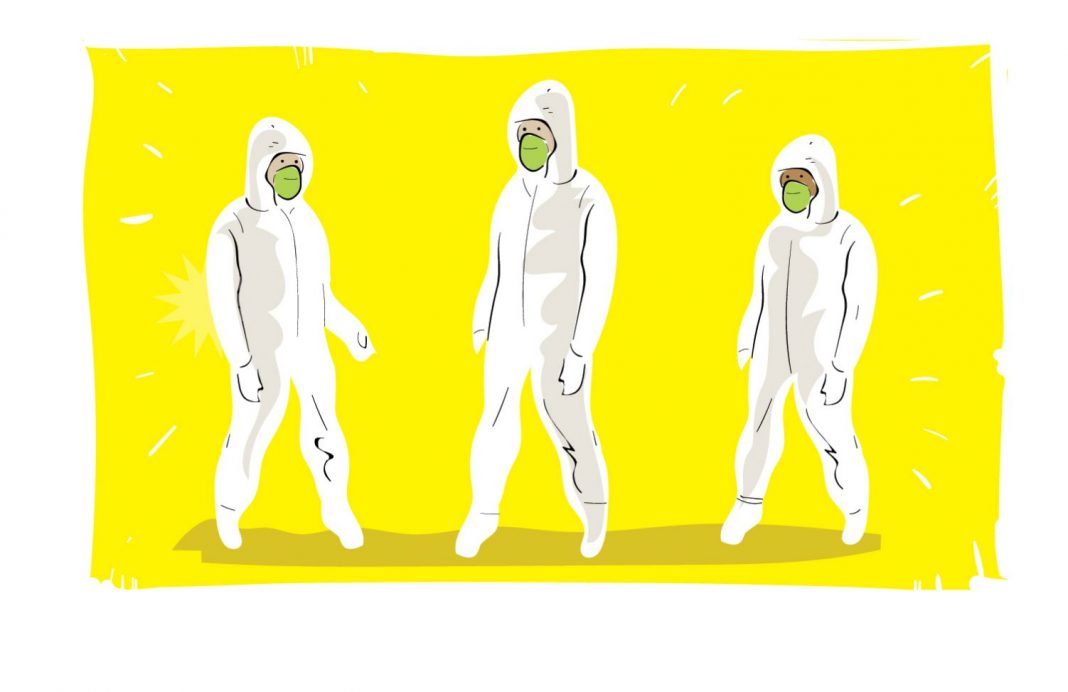 Amid an ongoing pandemic and widespread social unrest, you can’t blame Angelenos for feeling freaked out. If a deadly pathogen is in the air, what else might be lurking unseen? S. Brian Matthews, a private investigator for L.A. Intelligence, says his agency has been deluged with calls from people who think they’re under surveillance. “Suddenly everyone wants their homes swept for bugs.” The general unease transcends politics: on Twitter, the phrase “Time to buy a gun!” has been trending for weeks, with some fearful of killer cops and others of lawless looters, and handgun sales have jumped by 94 percent since last year. Unsurprisingly, a panoply of new products has emerged to temper the terror. We asked some experts for their reviews.

Let’s face it: no one looks good in a polyethylene hazmat suit, not even Naomi Campbell, who accessorizes hers with a Burberry cape. Even so, DuPont is struggling to keep up with demand for its disposable Tyvek suits, which sell for as little as $13 on Amazon. But to what end? “The gear is far too complicated to use for a trip to Trader Joe’s,” says Dr. Saskia Popescu, an epidemiologist at George Mason University. “It’s so easy to cross-contaminate yourself,” she explains. “It’s a really cumbersome process.”

Studies have shown that 15 minutes of UVC exposure kills viruses like SARS by making it impossible for them to replicate. It’s unclear whether UVC waves work as well on COVID-19, but experts are optimistic. Products like Phone Soap ($79.95) harness UV technology in tiny devices. “I’m a fan,” says Dr. Popescu, noting that phones can be dirtier than toilet seats. “But spray your phone with alcohol first.”

Nervous about meeting up with the police? Siri is here to help. Just download a free iOS shortcut called Police, say the phrase “Hey Siri, I’m getting pulled over,” and, voila!—your iPhone camera will start recording your interactions with law enforcement. It will also text or email the video to a predetermined contact and save it to Dropbox so you won’t have to worry about a cop deleting it.

If you’re convinced the feds are on your tail, you could sweep your home for hidden audio and video signals with Brickhouse Security’s RF Wireless Signal Detector Wand ($275). For an even more thorough job, hire Matthews’s P.I. company to check for bugs. But “unless you’re running a high-level crime ring, it’s unlikely the authorities are monitoring you,” he says. “They have their hands full these days.”

For the desperate-to-socialize, one company has designed a hazmat suit for nightclubs. The Micrashell prototype promises to allay infection concerns while allowing partiers to vape, pee, and even have sex. (It goes over only the top half of your body.) Popescu doubts the suit will be popular. “I’d discourage people from spending on one,” she says. “I’d also be surprised if concerts took off anytime soon.”

The Keychain Touch Tool by PEEL ($35) is made of copper—far less hospitable to errant coronaviruses than steel or plastic. It even doubles as a “subtle bottle opener” for your evening IPAs. “Door handles are high-touch surfaces, so this isn’t the worst idea,” says Popescu. But she warns that a keychain shouldn’t replace old-fashioned soap and water: “I still want people to wash their hands.”

Worried that your texts and phone calls are being monitored by the police? Plop your phone into the Mission Darkness Faraday Bag ($52), a special pouch that blocks all radio communications. According to the Prepper website preppersurvive.com, these bags blocked cell, Wi-Fi, GPS, and Bluetooth signals, and were effective at shielding devices from annoying electromagnetic pulses.