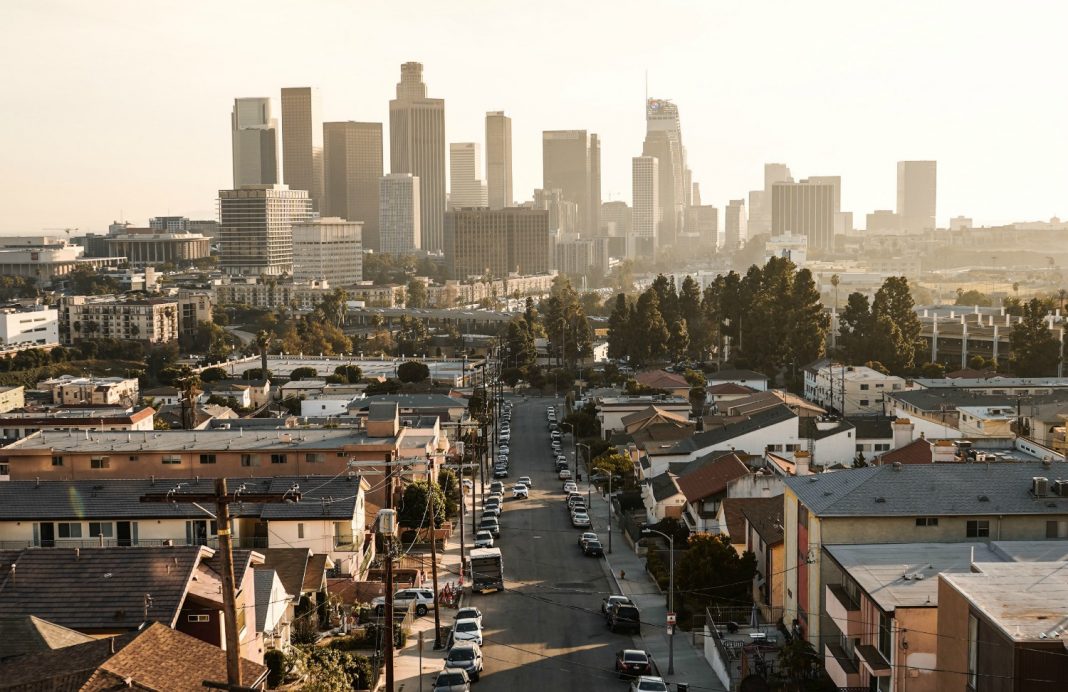 In only a decade, downtown architecture and design firm Omgivning (that’s Swedish for “environment or ambience,” according to the firm’s website) has put its stamp on about 400 L.A.-area buildings. The Globe Theatre, Exchange L.A., and Hollywood Lofts are just a few of the projects that the adaptive reuse specialists have tackled. When the pandemic hit and billable work decreased, the firm started thinking about what’s next for Los Angeles.

Karin Liljegren had founded Omgivning during the last recession. “I was pretty well aware that, in recession time, or difficult times, the development community tends to go on pause,” she says via video call, adding that many will ask, “What are we going to do next?”

However, this isn’t a typical recession. It’s not merely a question of how people will live when they have money again. The COVID-19 pandemic has shined a light on the inequity that exists within Los Angeles. “We’re in a health crisis. We’re in a climate crisis and we’re in a racial justice crisis,” says Liljegren. In light of all that, how do you redesign a sustainable city?

Omgivning has responded to the moment with “Reimagining Spaces: A Post-Pandemic Design Report.” Divided into the three parts, two of which have already been released, the report details design solutions for the workplace; “urban reprogramming,” including new uses for commercial and industrial properties; and multi-family housing. The multi-family housing portion will come out on September 15.

The COVID-19 pandemic has shined a light on the inequity that exists within Los Angeles.

There are four themes driving the report. One is “human-centered design,” which incorporates ideas for creating group and private spaces, bringing elements of nature into the environment, and, in general, creating spaces that are both useful and comfortable.

Moreover, the Omgivning team is looking toward “blended use,” or spaces that can serve a variety of functions, as well as ways to cut costs for those who own or rent the spaces. The themes, Liljegren says, have been a part of the firm’s work prior to the pandemic. But, she adds that there’s “a new sense of urgency.”

“In the beginning a lot of people were saying we’re going to need more space because now we have to be six feet apart,” says Liljegren. “I was thinking, that’s very short-sighted.”

Instead, Liljegren is of the opinion that it’s not the size of the space that matters, but how many uses it can handle. That means thinking about ideas like “pods” in offices that can be reconfigured for different uses to maximize smaller spaces as well as designs that allow multiple businesses to share larger spaces, all which can help businesses lower overhead and, hopefully, save more jobs.

Other ideas include converting empty strip malls into housing. “The reuse of buildings is, obviously, a big part of sustainability,” she says. And there are a lot of strip malls in Los Angeles, including many that have lost tenants. “It’s really such an ideal building type to become housing,” she says.

As for multi-family housing, that will need to be reimagined for longer periods of time spent at home in an increasingly dense city. “We need to keep densifying our cities,” she says. “In order to densify them, we have to be providing a more humanizing experience for everybody.” This can mean incorporating more green spaces, areas for urban farming and work spaces.

Where Liljegren often has clients in mind when developing ideas, these reports have a broader reach. Maybe they can impact other designers or people in the city who can affect policy changes. The reports are letting people know that right now is the time to work for a more sustainable city and design can help do that.

Liljegren is optimistic about the future. “I think that there’s no doubt that we will come out of this better than we were before,” she says. Better, in this instance, means designing urban environments that take into account everyone’s needs, not just the wealthy.

RELATED: If Ever There Were a City to Finesse a Catastrophe, It’s Los Angeles