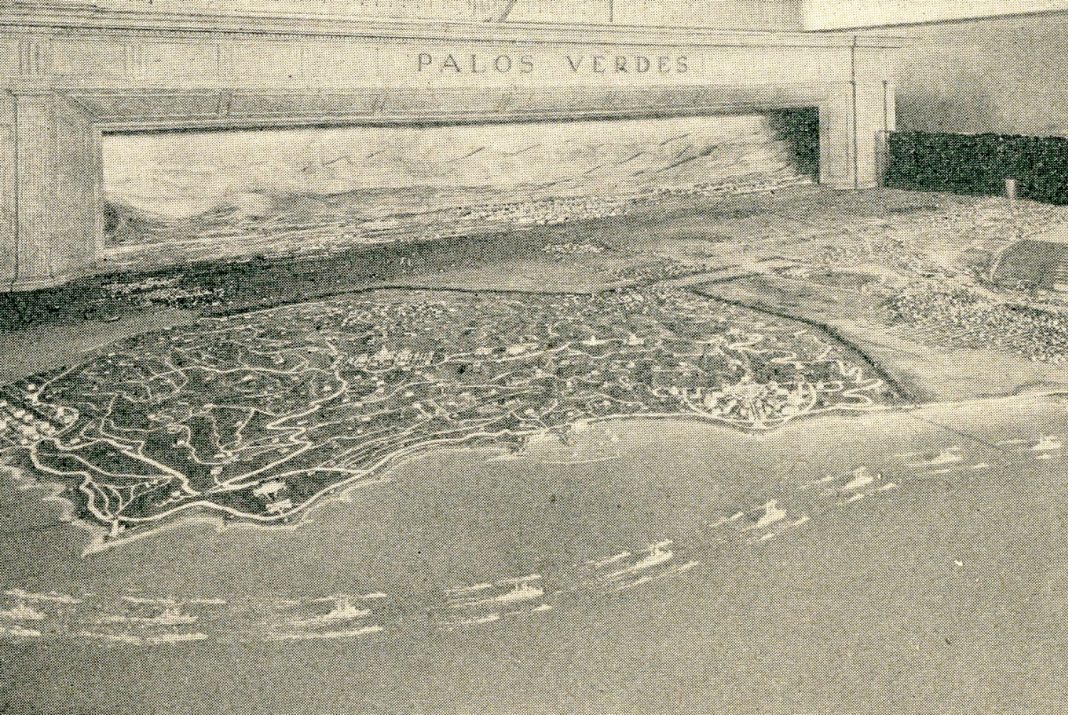 The maps shown here are from an intriguing brochure advertising more than just a real estate venture, but a tightly planned and monitored community. Right from the get-go Palos Verdes Estates was to be a refuge from the hustle and bustle of nearby Los Angeles claiming to be “the most splendid residential district in the West.” You can’t deny that the geographic setting is spectacular, but the claims made may stretch the truth a wee bit.

The peninsula was an island thousands of years ago but as the eons passed the land was connected by erosion from the mountains. While the Tongva Indians lived on the land for possibly 8,000 years, it was described as untouched and unspoiled by the sellers of real estate who saw an opportunity during the early 20th century.

The hills had been part of the Spanish land grant Rancho San Pedro and later the Mexican grant Rancho de los Palos Verdes when it was used for cattle ranching and even a whaling station. Later, the land passed to Jothan Bixby of Rancho Los Cerritos who leased the fertile land to Japanese farmers. Eventually a New York investor Frank A. Vanderlip bought 25 square miles of the peninsula from the Bixby family and turned over the developing of the land to E.G. Lewis, who brought in no less than the Olmstead brothers (who designed Central Park in NYC) to landscape and lay out the streetscape for home sites of “exceptional magnificence.” The homes would range from Spanish style single family dwellings to mansions with a full 28 percent of the land set aside for open space to allow dazzling views of the blue Pacific or the city lights of Los Angeles.

Investors lined up and the project organizers held a meeting at the packed Trinity Hall where they raised millions but not quite enough millions to complete the job. At first the peninsula was fairly isolated and used as a summer resort for those with some of the big cash that was flowing through L.A. in the 1920s. The brochure promises that the Estates would be cooler in summer, warmer in winter; residents would find freedom from high winds, ocean fogs, frost and there was just one single, solitary day in the past year when the sun did not shine! To “insure residents against the inartistic or the injurious in design” there was to be an Art Jury to overlook the neighborhoods chaired by Myron Hunt. A very specific set of “Protective Restrictions” spelled out exactly what would make certain residents of the Estates would find “health, beauty, and fellowship.” There would be no industries, no asylums or nuisance businesses along with a ban on billboards, outhouses, tents or the keeping of livestock. Even trees were supposed to be less than 20 feet tall which was a challenge since eucalyptus was a common planting.

There was a shameful side to this exclusionary set of rules that included racial covenants that kept minorities out of most such communities. Such covenants forbade an owner to sell or rent a house to anyone who wasn’t Caucasian and to not permit African-Americans on their property with the exception of chauffeurs, gardeners, and domestic servants. The “sundown rule” was strictly in effect, and it wasn’t until 1948 when such restrictions were declared unconstitutional. Yet, it took 20 more years until the Fair Housing Act was passed in 1968 for the reality of the civil rights protections to take hold. While progress has been made, Palos Verdes still has less than 7 percent Latino and black residents.

As seen on the map there were four districts: Valmonte, Malaga Cove, Lunada, and Miraleste. While World War I slowed the construction by 1923 the deed restrictions were in place. When the depression struck and the Palos Verdes Project was short on taxes the residents got the place incorporated in 1939 to keep the Homes Association in place. Every lot holder got a share and a vote with a guaranteed view of the “sapphire sea” near one of the one hundred bays with marine gardens.

After World War II the Peninsula began to get the attention of the booming aerospace industry titans who fit the original description of prospective buyers as “seekers and builders of great estates.” Today, the names have changed to “Rolling Hills,” “Rolling Hills Estates,” “Rancho Palos Verdes,” and, as always, Palos Verdes Estates.